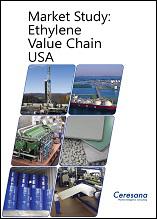 Ethylene is the by far most important raw material in the petrochemical industry. Consumption is immense: the USA single-handedly processed 25 million tonnes of ethylene in the past year. As the first market research institute ever, Ceresana has analyzed the entire ethylene value chain in a specific region, namely the USA. "This is the worldwide first study of its kind, it provides complete transparency of the ethylene market, beginning with feedstocks up to the final products", explains Oliver Kutsch, CEO of Ceresana: "The value added in downstream sectors is considerable. Besides polyethylene plastics, direct applications of ethylene include important chemicals such as alpha olefins used to increase rigidity of polyethylene, ethylene oxide needed in the manufacturing of PET plastics, and ethylbenzene, which is predominantly processed into polystyrene. Other applications are vinyl acetate monomer and the elastomer EPDM.“Shale Gas BoomEthylene is mainly produced from ethane, propane, butane, and naphtha. The shale gas boom in the USA resulted in an unprecedented surge of announcements to construct new ethane crackers. Until 2018, US ethylene capacity is scheduled to increase by about half. Compared to other feedstocks, cracking of ethane yields a rather high amount of ethylene. Ceresana forecast approx. three quarters of ethylene output to be based on ethane in 2021.Considerable Decline of Feedstock CostsThe notable decline of prices for ethane in recent years has caused a significant change of the cost situation for manufacturers of ethylene. Average feedstock costs per tonne of ethylene manufactured fell by about 40% between 2008 and 2013. Manufacturing ethylene from ethane enjoys a notable competitive advantage: In the fourth quarter of 2013, cash costs (consisting of fixed, variable operational and feedstock costs minus profit generated with by-products) were two thirds lower when using ethane than when using naphtha as feedstock.Polyethylene Prime ApplicationIn 2013, about 60% of US demand for ethylene was accounted for by producers of these plastics. Depending on density and rigidity of the product, polyethylene is classified as either HDPE, LDPE or LLDPE. In the future, ethylene will mainly be utilized to manufacture polyethylene: Large new production site for HDPE and LLDPE in particular are being constructed. Given the upturn of the real estate sector and ever increasing consumption expenditure, prospects for domestic demand in the USA are good. The impulses in construction and packaging have corresponding effects on demand for polyethylene. However, sales volume of polyethylene on foreign markets has to rise notably in the future in order to ensure an acceptable degree of capacity utilization of US facilities. Export Hit PVCThe plastic PVC is manufactured via the intermediates ethylene dichloride and the vinyl chloride manufactured from it. In the past, notably more than 40% of US PVC output had been exported. This was a major support for the PVC industry that suffers from low domestic demand. Thus, the strong need for modernization of the water supply and sewage networks in the USA should have a positive effect on the demand for PVC.The Study in Brief:Chapter 1 depicts supply and prices of feedstocks and their effects on the ethylene industry - starting with crude oil and natural gas until ethane, propane, butane, naphtha, and gas oil. It also includes a detailed cost analysis of ethylene production, depending on the feedstock used. Data is given on fixed, variable operational, and feedstock costs as well as a comparison of cash costs and profits generated with by-products. Quarterly depiction of the years 2005 to 2013 and forecasts for the years 2013 to 2021 are provided.Chapter 2 offers an overview over the market for ethylene in the USA: Market data regarding revenues development, demand and production, existing and future capacities as well as trade are explained in detail.Chapter 3 analyzes the market for derivatives of ethylene. Data on demand, revenues, prices, costs, production, trade and a list of manufacturers including capacities is provided for the most important applications. Headings 3.1. to 3.3. are examining the various types of polyethylene in more detail: HDPE, LDPE, and LLDPE. Chapter 3.4 analyzes the value creation starting from ethylene dichloride and vinyl chloride up to polyvinyl chloride. Chapter 3.5 examines the market for ethylene oxide and the downstream segments ethylene glycol, ethanolamines, and non-ionic surfactants. The following chapters are dedicated to derivatives of ethylene such as alpha olefins as well as the value chain from ethylbenzene and styrene to applications like polystyrene (PS), expandable polystyrene (EPS), acrylonitrile butadiene styrene (ABS)/styrene acrylonitrile (SAN) and styrene butadiene rubber (SBR), which will be profiled and analyzed separately.Chapter 4 offers a useful directory of producers within the US ethylene value chain. The profiles are clearly arranged according to contact details, sales, profit, product range, production sites, and summary profile. Each profile also includes specific information about the value chain as well as current and future production capacities for ethylene and derivatives. These are split by site and product. Extensive profiles are given for the largest 48 manufacturers, including Chevron Phillips Chemical Company, Exxon Mobil, LyondellBasell Industries, Huntsman International, The Dow Chemical Company, Occidental Petroleum, Formosa Plastics, Royal Dutch Shell, Total, Westlake Chemical and Styrolution (note: Profiles are assigned to the country in which the company or holding is headquartered. Company profiles also include joint ventures and subsidiaries).Further information: www.ceresana.com/en/market-studies/value-chain/ethylene-usa/Ceresana is a leading international market research and consultancy company for the industrial sector and operates branch offices in Constance, Vienna and Hong Kong. For more than 10 years, it has been supplying several thousand customers from 55 countries with up-to-date market intelligence. Extensive market knowledge creates new prospects for strategic and operational decisions. Ceresana's clients profit from practical consulting services, tailor-made single-client studies and more than 60 independent multi-client market studies. The Ceresana business analysts are specialists in markets chemicals, plastics, additives, commodities, industrial components, packaging, and construction materials.Ceresana Technologiezentrum Blarerstr. 56 78462 Constance Germany Tel.: +49 7531 94293 12 Fax: +49 7531 94293 27 Public Relations: Martin Ebner, m.ebner@ceresana.com

10-05-2021 | Industry, Real Estate & Constr …
CERESANA
Lightweight Materials for Electric Cars: New Ceresana Study on Automotive Plasti …
The rapid electrification of automotive transport, which is being promoted by numerous countries, is a challenge for the automotive industry, but also for many other sectors: Vehicle manufacturers are not only the main customers for steel, glass, and tire rubber, but increasingly also for plastics. Even small changes in the raw materials that are used can have significant economic effects. In 2020, around 14.3 million new passenger cars were registered
03-23-2021 | Industry, Real Estate & Constr …
CERESANA
Successfully Catching Up: New Ceresana Report on the European Market for Electri …
Electric motor, hybrid, or hydrogen? A revolutionary transition stirs the world of transportation. Car manufacturers, suppliers and new challengers are competing for the electric, carbon-neutral, and fully interconnected mobility of the future. Established industrial locations with millions of workers now have to reinvent themselves. However, electrification is not only rapidly changing the automotive industry. Innovative technologies and new business models are transcending old industry boundaries: Telecom companies have become interested
12-07-2020 | Industry, Real Estate & Constr …
CERESANA
Improved Prospects: Ceresana Expects Growing World Market for Plastic Windows
After more than ten boom years, the construction industry is spoiled by success. Even the corona pandemic has not yet had a great impact, since the order books are still well filled. However, the drastic measures to contain the pandemic will also affect the construction sector and its suppliers, albeit with a time lag. This is the third time that Ceresana has analyzed the global market for plastic windows used
11-02-2020 | Industry, Real Estate & Constr …
CERESANA
Insulating and saving: new Ceresana report on the world market for insulation ma …
Choosing the right insulation material is a science in itself: it should insulate well, be robust and inexpensive, quick to install, but also environmentally friendly, fireproof, durable, and easy to dispose of. Unfortunately, however, no patent solution has yet been found as no material has so far fulfilled all requirements equally well and at the same time. Even so, there is no way around insulation if energy saving and climate

02-04-2021 | Business, Economy, Finances, B …
And We Support
Vectorization Services in USA
Websites, businesses and brands are all much more than just words and products—they’re also images and art. Graphic design is an integral part of any business and that’s as true for your company’s image as it is for your marketing. Colorful, high-resolution images, engaging videos and illustrative graphics can help potential buyers better understand your products and services, and help them see—literally—the benefits they offer. Our aim to place you in a
03-17-2020 | Advertising, Media Consulting, …
IBIS Worldwide
IBIS USA 2020 simulcast
IBIS (International Bodyshop Industry Symposium) is pleased to announce that IBIS USA 2020 will take place as a virtual event on 2 April. As a result of the global coronavirus situation and widely implemented travel restrictions, we've taken the pragmatic decision to evolve the planned face-to-face event into an on line simulcast to be broadcast between 12:00pm and 3:00pm EDT. The simulcast will be an interactive, multi-media-led, on line IBIS, comprising all
02-13-2019 | Health & Medicine
Medical Wearable Market
Global Medical Wearable Market to 2025| Abbott Laboratories(USA), MC10(USA), Med …
Researchmoz added Most up-to-date research on "Global Medical Wearable Market Insights, Forecast to 2025" to its huge collection of research reports. The global Medical Wearable market is valued at million US$ in 2017 and will reach million US$ by the end of 2025, growing at a CAGR of during 2018-2025. The objectives of this study are to define, segment, and project the size of the Medical Wearable market based on company,
06-12-2017 | Industry, Real Estate & Constr …
ReportsWorldwide
Agrochemicals Market in USA
ReportsWorldwide has announced the addition of a new report title USA: Agrochemicals: Market Intelligence (2016-2021) to its growing collection of premium market research reports. The report “USA: Agrochemicals: Market Intelligence (2016-2021)” provides market intelligence on the different market segments, based on type, active ingredient, formulation, crop, and pest. Market size and forecast (2016-2021) has been provided in terms of both, value (000 USD) and volume (000 KG) in the report. A
06-09-2017 | Health & Medicine
Allied Academies
ENT 2017_Conference_New Orleans, USA
On behalf of Allied Academies, it is our pleasure to invite you all to the “5th American Otolaryngology - ENT Surgery Conference” during November 09-10, 2017. New Orleans, Louisiana, USA. The International conference offers a focus on “Emerging Trends and Innovations in Otolaryngology-ENT”. For more details, visit us: http://ent.alliedacademies.com/ The ENT 2017 will cover the various key issues related to Head and Neck such as Head and Neck Surgery, Otolaryngology (ENT),
08-04-2016 | Advertising, Media Consulting, …
Market.Biz
Global Zinc Borate Market 2016 - Chemtura (USA), Borax (USA), AkroChem (USA), Ro …
Report On 2016 Global Zinc Borate Industry provides a deep analysis of the Zinc Borate market. Global Zinc Borate Consumption Price, Zinc Borate Market Size (Volume and Value) and End Users Analysis. In the beginning, (Worldwide Zinc Borate Market-2016) provides a basic overview of the Zinc Borate industry including definitions, classifications, applications and Zinc Borate industry chain structure. The Zinc Borate market analysis is provided for the international market, which includes
Comments about openPR
I can't but agree to the positive statements about your portal: easy to use, clear layout, very good search function, and quick editing!
Jens O'Brien, Borgmeier Media Communication