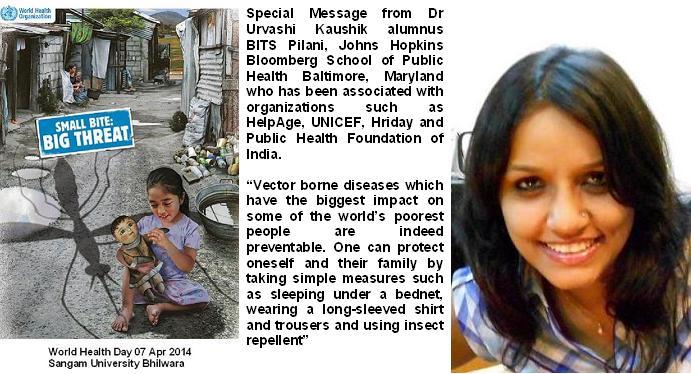 The founding of the World Health Organization - WHO is marked by World Health Day and is an occasion to raise awareness of key global health issues. The theme for this year is "Small Bite, Big Threat”.At Sangam University Bhilwara which has established a rich tradition of observing days of national and international importance on a regular basis, World Health Day was duly observed on 07 April 2014. On this occasion Prof BR Natarajan President – Vice Chancellor shared the following with the faculty and students of Sangam University. To quote WHO which was established on 07 April 1948, “Health is a state of complete physical, mental and social well-being and not merely the absence of disease or infirmity”.It is surprising to know that more than half of the world's population faces the danger of diseases such as malaria, dengue, yellow fever, chikungunya and such vector-borne diseases which are caused by organisms (vectors) that transmit pathogens and parasites from one infected person or animal, to another. The most commonly known vectors are mosquitoes, sand flies, bugs, ticks and snails, which can transmit a wide range of parasites and pathogens.40% of the world's population is at risk from dengue. An estimated 1.3 million new cases of Kala Azar (leishmaniasis) occur annually. Malaria has been one of the biggest causes of death worldwide. Vector-borne diseases affect the poorest populations, particularly where there is a lack of access to adequate housing, safe drinking water and sanitation. Malnourished people and those with weakened immunity are especially susceptible.Environmental changes, a massive increase in international travel and trade, changes in agricultural practices and rapid unplanned urbanization are causing an increase in the number and spread of many vectors worldwide and making new groups of people, notably tourists and business travellers, vulnerable. “Mosquitoes, flies, ticks and bugs may be a threat to your health – and that of your family - at home and when traveling” is the message of this year’s World Health Day, on 7 April by WHO. “Vector borne diseases which have the biggest impact on some of the world’s poorest people are indeed preventable. One can protect oneself and their family by taking simple measures such as sleeping under a bednet, wearing a long-sleeved shirt and trousers and using insect repellent” was the special message on this occasion to the students and faculty of Sangam University which came from alumnus of Johns Hopkins Bloomberg School of Public Health Baltimore, Maryland Dr Urvashi Kaushik who also holds a Masters in Public Health from Birla Institute of Technology and Science - BITS Pilani and has been associated with organizations such as HelpAge, UNICEF, Hriday and Public Health Foundation of India. For more details see http://www.sangamuniversity.ac.inThe Institution supported by Sangam Group of Industries Bhilwara which is one among the top ranking corporates in India today with business interests spanning textiles, steel, infrastructure, power and energy has been established by Govt. of Rajasthan Act No. 14 of 2012 incorporated u/s 2(f) of UGC Act 1956. It's a matter of pride that the one year young Sangam University has a ten year old legacy with ITM established in 2003 as its foundation. For more details see http://www.sangamuniversity.ac.inMedia Relations Sangam University NH 79 Bhilwara Chittor Bypass Chittor Road Bhilwara 311001 Rajasthan India Phone 91-1482-650505 Fax 91-1482-249225 Email: info@sangamuniversity.ac.in Homepage: http://www.sangamuniversity.ac.in

05-15-2014 | Science & Education
Sangam University
Sangam University - Talk on North East India History Culture Heritage by Prof Ar …
The University Grants Commission – UGC has directed universities in India today to include the History and Unique Cultural Heritage of the North Eastern States of the country in the curriculum of courses in higher education institutions. A delegation of North Eastern students recently had submitted a Memorandum to Honorable Prime Minister with regard to problems being faced by them while pursuing their academics in various institutions across the country.
05-06-2014 | IT, New Media & Software
Sangam University
World Press Freedom Day 2014 at Sangam University Bhilwara Rajasthan
It’s indeed a matter of deep concern that India has been ranked 140 in the list of 180 countries in the world with press freedom as per a recent annual report World Press Freedom Index by media watchdog Reporters Without Borders – RSF. World Press Freedom Day - WPFD observed on 3 May every year was proclaimed by the United Nations General Assembly in December 1993 as a day "to celebrate
04-23-2014 | Science & Education
Sangam University
Sangam University - Talk on Business Plan Guidelines by Spears School of Busines …
The target audience is potential investors, not a thesis review committee. Investors are much more interested in the business opportunity and getting out with a lot more money than they put in than in the technology. On 27 March 2014, Richard Gajan who holds an MBA from the University of Michigan, an MS in Mechanical Engineering from Texas A&M University, and a BS in Mechanical Engineering from Oklahoma State
01-23-2014 | Science & Education
Sangam University
Sangam University Bhilwara VC Talk on National Youth Day Birla Shishu Vihar Pila …
In the words of UN Secretary General Ban Ki-moon "Youth are a transformative force; they are creative, resourceful and enthusiastic agents of change be it in public squares or cyberspace." India celebrates the birthday of Swami Vivekananda who was born on 12 January 1863 every year as National Youth Day and 2014 is special as it marked the conclusion of 150th birth anniversary celebrations of the iconic spiritual leader. The relevance

06-04-2019 | Health & Medicine
Pabst Science Publishers
Health literacy: How to improve health behaviors
Health literacy is defined as "people´s knowledge, motivation and competences to access, understand, appraise and apply information to make judgements and take decisions in everyday life healthcare concerning disease prevention and health promotion to maintain and improve quality of life during the life course." In a new volume Anne-Kathrin Mayer and colleagues shed light on the concept of health literacy from different disciplines: psychology, educational sciences, health sciences and
02-04-2019 | Business, Economy, Finances, B …
GetSavvi Health
GetSavvi Health - For Health Insurance Needs
GetSavvi Health offers health insurance, which includes basic and primary care at affordable prices. The company believes in the fact that South Africans are hard working and each of them deserve access to affordable and high-quality healthcare facilities and that too at affordable prices. The company desires to be a leader in the primary healthcare sector. Primary care is all about basic healthcare facilities through day-to-day benefits, which help in
11-16-2018 | Health & Medicine
Allied academies
Nutrition: Health Is Wealth
Nutrition is the supply of food to the body required by an organism to stay alive and healthy. In the language of human medicine, nutrition is the practice of consuming foods or utilization by the body. In today’s life, consuming healthy food is as difficult as getting fresh air. Seriously, nutrition is no rocket science! Having a little knowledge of nutrients and its proportions makes it easier for the consumer
11-05-2018 | Health & Medicine
LexisConferences
MENTAL HEALTH NURSING, PUBLIC HEALTH AND HEALTH CARE SUMMIT
Psychiatric and Mental Health Nursing 2019 will prove to be a noteworthy event, with this we cherish mental health nursing by embracing the theme, “Fore-fronting nursing care to achieve mental wellness” , and would step forward to provide an opportunity to step in and join our family, as we bring and encourage to join professionals from the following areas of Mental Health, Psychology, Nursing, Physiology, Neurology, Healthcare, Education, Business to
07-24-2017 | Health & Medicine
MarketResearchReports.biz
TrendSights Analysis: Guided Health
"TrendSights Analysis: Guided Health", explores what the Guided Health trend is, why it is important, who is most influenced by it, and how brands and manufacturers can capitalize on it. The research concludes by identifying where the trend is heading next and how long it will last. In the information economy, health-conscious consumers now more confidently embrace an abundance of new information tools, enabling more health-driven choices. Consumers are seeking conveniences
06-16-2017 | Health & Medicine
Pharmaceutical By CMI
Pet Health Products Market
A pet or companion animal is an animal kept primarily for one's company, protection, or entertainment. Popular pets are regularly noted for their attractive appearances and their loyal or playful personalities. While dogs and cats are the most preferred pet animals, people also keep house rabbits, fancy rats, guinea pigs, parrots, chickens, and aquatic pets. The trend of pet adoption and keeping is gaining rapid traction across the globe. The
Comments about openPR
I can't but agree to the positive statements about your portal: easy to use, clear layout, very good search function, and quick editing!
Jens O'Brien, Borgmeier Media Communication