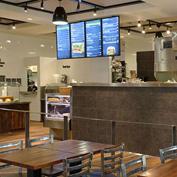 Noventri announces that Wagshal's, a European Style Market/Eatery in the upper NW Washington DC Area, est. 1925, has chosen to roll out Noventri Digital Menus and Promotional Boards at two additional locations.Wagshal's offers fresh market options and patrons can create their own custom sandwiches as well as salads and is frequented by celebrities and Presidents. Wagshal's has become a landmark in Washington DC because of because of the array of fine foods and wine but most of all, they have been acclaimed as having the best Brisket sandwich in DC!Wagshal's needed the flexibility of adjusting menus and promotional screens from any location, preferably using a tablet or smart phone. Wagshal's took advantage of Commander Online, a web-based user interface from Noventri. Commander Online can be accessed by any web-enabled device and is a WYSIWYG interface that is extremely easy to use."Noventri Commander, along with the quality of work demonstrated by Noventri had a lot to do with our decision to move forward with them," said Brian Fuchs, VP at Wagshal's. "Our marketing company in Colorado has the same user experience as we do in our home office. It's great!"Wagshal's also required a partner that could supply digital menus that would meet the same high quality and standards that Wagshal's strives to maintain. Noventri met that requirement. The initial installation began at 3201 New Mexico Avenue, N.W. Washington, D.C. and included a menuboard with four 46" ultra-slim LCD screens mounted in portrait orientation at the sandwich station. Other menus and promotional screens included a gelato / wine / beer menu, bakery promo/menu, seafood promo/menu, meat promo/menu, and a salad station promo/menu. A promotional screen was placed in the dining area that includes videos produced by Wagshal's. For internal communications, a 46" LCD screen was furnished at the corporate offices on 48th Street NW.Based on the success of the New Mexico Avenue installation, Wagshal's has decided to bring Noventri Digital Menus and Promotional Boards into two other locations, the Wagshal's Delicatessen and Wagshal's Market, both on Massachusetts Ave NW. The new displays will not only add to the existing decor, but will also keep customers up to date on current offerings, upcoming specials, and featured events.Noventri is a U.S. digital signage technology company that excels at automation, utilizing databased content and has established a stellar work-flow for a wide range of industries worldwide. To learn more about Noventri Digital Menuboards and Promtional boards visit the Noventri website.Noventri – a division of Specialized Communications Corporation (est. 1978) - Noventri succeeds by simplifying the digital signage experience through solid automation and data based content solutions and serves such names as Quiznos, Lockeheed Martin, ETS, Bristol Myers Squibb, Marriott and numerous other facitlities in a wide range of industries worldwide.20940 Twin Springs Dr., Smithsburg, Maryland 21783-1510. URL: www.noventri.com