Global Webgame Market Set to Generate Over $6.0 Billion Revenue by 2030 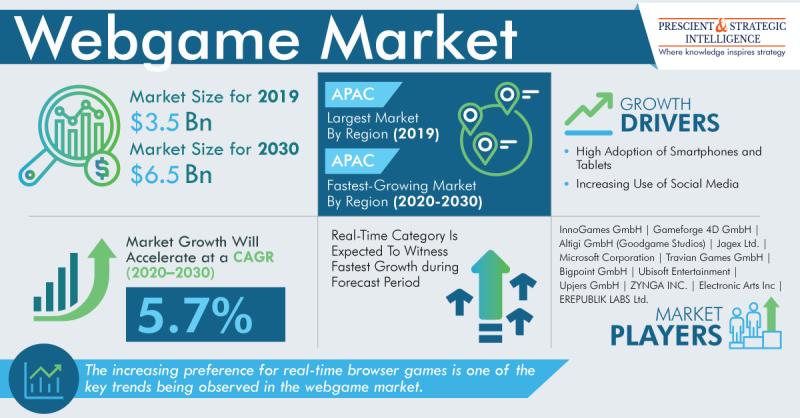 The global webgame market generated a revenue of $3.5 billion in 2019 and is predicted to attain a valuation of $6.5 billion by 2030. According to the estimates of P&S Intelligence, a market research firm based in India, the market would progress at a CAGR of 5.7% between 2020 and 2030. The growing usage of tablets and smartphones and the increasing utilization of social media are the prominent two factors driving the growth of the market across the globe.Both developing and developed nations have witnessed a sharp surge in the usage of tablets and smartphones over the last few years. Moreover, according to GSMA Intelligence, the worldwide penetration of smartphones is predicted to rise from 60% to 79% from 2018 to 2025. With rapid technological advancements in mobile communications, the popularity of online games is growing rapidly as people are now able to play these games without graphics issues or lag. Request for sample pages of this report: https://www.psmarketresearch.com/market-analysis/webgame-market-insights/report-sampleWith the development of advanced devices having better processors, higher speeds, larger screens, and high-definition (HD) displays, people are able to play games anytime and anywhere without worrying about the device breaking down. The present-generation smartphones feature advanced configurations that support various types of games. Furthermore, the increasing penetration of the 5G and 4G networks is eliminating internet connectivity issues, which is, in turn, boosting the popularity of mobile games across the globe. The surging penetration of the internet is also fueling the expansion of the webgame market. According to the International Telecommunication Union, the global internet penetration rose from 23.1% to 51.4% from 2008 to 2018. Because of the soaring internet connectivity, people all over the world are increasingly becoming addicted to various online browser games. Depending on genre, the market is divided into first-person shooters, massive multiplayer online roleplaying games (MMORPGs), arcade games, sports games, and real-time strategy games. Out of these, the first-person shooter category is predicted to exhibit rapid advancement in the market in the future years. Unlike the third-person shooter games in which the user can see their character, in first-person shooters, the user cannot see the model of their character. Instead, they can see the world from their character's eyes. These types of games are gaining massive popularity all over the world, on account of their thrilling nature.Browse full report at: https://www.psmarketresearch.com/market-analysis/webgame-market-insightsGlobally, the webgame market recorded the highest growth in Asia-Pacific (APAC) in the past. This was because of the high disposable income of the people residing in the regional countries such as India and China. In the last few years, the per capita disposable income of the inhabitants of these countries has risen massively. For example, in the first half of 2019, the per capita disposable income of people in China was $2,227, which was a growth of 8.8% Y-o-Y.Hence, it can be said with certainty that the market would demonstrate huge expansion all over the world in the forthcoming years, mainly because of the ballooning usage of tablets and smartphones and the rising penetration of the internet in various countries around the world.P&S Intelligence provides market research and consulting services to a vast array of industries across the world. As an enterprising research and consulting company, P&S believes in providing thorough insights on the ever-changing market scenario, to empower companies to make informed decisions and base their business strategies with astuteness. P&S keeps the interest of its clients at heart, which is why the insights we provide are both honest and accurate. Our long list of satisfied clients includes entry-level firms as well as multi-million-dollar businesses and government agencies.Contact: P&S Intelligence Phone: +1-347-960-6455 Email: enquiry@psmarketresearch.com Web: https://www.psmarketresearch.com Follow Us: https://www.linkedin.com/company/pnsintelligence/

You can edit or delete your press release Global Webgame Market Set to Generate Over $6.0 Billion Revenue by 2030 here

02-08-2023 | Business, Economy, Finances, B …
P&S Intelligence
Commercial Satellite Imaging Market Will Reach USD 8,777 Million By 2030
In 2022, the commercial satellite imaging market size stood at USD 3,754 million, which is projected to propel at 11.20% CAGR during 2022-2030, reaching USD 8,777 million by 2030, according to P&S Intelligence. With the utilization of optically prepared satellites, raw image information is formed in the process of imaging. Aeronautical imaging provides better image resolution in comparison to satellite imaging, as it is nearer to the object. Terrestrial imaging is
02-08-2023 | Business, Economy, Finances, B …
P&S Intelligence
Battery Management System Market Is Set To Hit USD 26,797 Million by 2030
For overcharge discharge, under/over current, under/over voltage, under/ over temperature, and short circuit protection, battery management systems are utilized. Specific algorithms, such as cell/module balance, SOC, SOH, and real-time charge/discharge current management, are used in these systems. These systems are used in commercial and industrial buildings, utility grid support systems, specialized vehicles, and residential energy storage. Request for sample pages of this report: https://www.psmarketresearch.com/market-analysis/battery-management-system-market/report-sample By 2030, it is predicted that the
02-08-2023 | Business, Economy, Finances, B …
P&S Intelligence
Gas Insulated Switchgear Market To Reach USD 36,400.7 Million by 2030
The total size of the gas insulated switchgear market was USD 22,457.4 million in 2022, and it will hit USD 36,400.7 million by 2030, advancing at a rate of 6.2% by the end of this decade, as per a report by P&S Intelligence. The indoor category had the larger share, about 70%, in the past because indoor switchgear is much safer and dependable, needs less space than an outdoor system, and
02-08-2023 | Business, Economy, Finances, B …
P&S Intelligence
Expansion of Construction Sector Boosts Acrylates Industry
Non-surfactant suspending agents with film forming, anti-static, and binding abilities are known as acrylates. They are composed of methacrylic acid and acrylic acid building blocks. The acrylates market is projected to experience the fastest growth in the APAC region, caused by the population explosion, increase in disposable income, and rapid urbanization. It results into increase requirements for adhesives & sealants, paints & coatings, leather chemicals, textile chemicals, and acrylic fibers