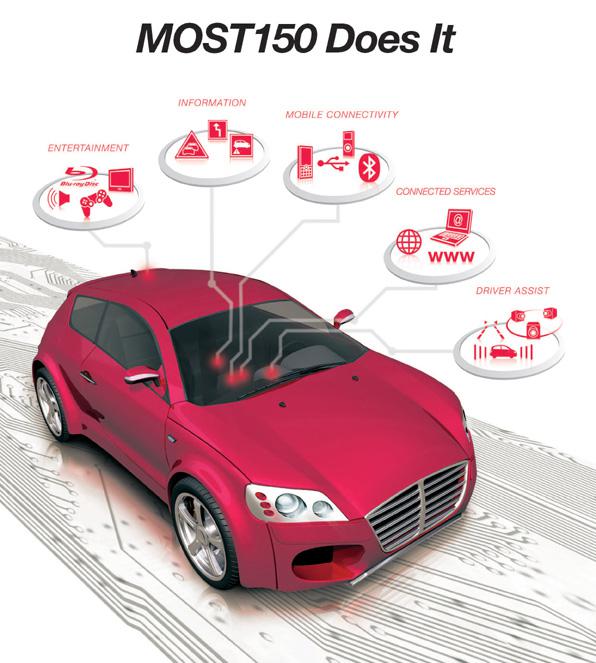 MOST Cooperation Welcomes Commitment from Microchip Technology to Release MOST150 Data Link Layer SpecificationThe MOST® Cooperation - standardization organization for the leading automotive multimedia network technology Media Oriented Systems Transport (MOST) – welcomes Microchip Technology’s decision to make its MOST150 Data Link Layer Specification available for license on a royalty-bearing basis, as announced in a press release on November 13, 2013. "In October 2007, SMSC and Harman/Becker started opening the data link layer by announcing that a detailed Data Link Layer specification for the first generation, MOST25, had been made available and could be requested," stated Rainer Klos, MOST Cooperation Administrator. "MOSTCO very much appreciates that Microchip is now continuing this process by giving other semiconductor companies the opportunity to develop, manufacture and supply chips with a MOST150 interface." (For the full press release, please see http://www.microchip.com/pagehandler/en-us/press-release/microchip-releases-most150-dat.html)Carmakers Endorse Continued Opening of MOST Data Link Layers"Audi welcomes Microchip's decision to license their MOST150 Data Link Layer intellectual property to other semiconductor manufacturers," said Stephan Esch, Head of Vehicle Networking, Technical Development at AUDI AG. "Since the first implementation of MOST25 in an Audi car in 2002, MOST has become the established standard for the networking of premium infotainment systems at Audi. The latest generation, MOST150, was recently released on the street in the Audi A3 and VW Golf and will be introduced throughout the Volkswagen range of vehicles. In Microchip's commitment we see a further step to make complementary technologies more widely available and spreading the adoption of MOST. Due to this opening step, the semiconductor industry has the chance to design optimized products, enabling more competition.""From Daimler's perspective, Microchip's program to license MOST150 Data Link Layer on a commercially reasonable basis will support further spread of the MOST Technology and allow for additional innovation and competition," stated Dieter Seidl, Head of Telematics Architecture at Daimler AG. "MOST150 has been implemented in the brand-new generation of the S-Class, and the technology will subsequently be rolled out onto all other Mercedes-Benz car lines, step by step. In order to disseminate new generations of MOST Technology, it is essential that we increase the number of companies that can manufacture MOST compatible parts."About MOST Technology MOST (Media Oriented Systems Transport) is a multimedia networking technology optimized for use in cars and other applications. It enables the transport of high Quality of Service audio and video together with packet data and real-time control over a single transmission medium. MOST can use plastic optical fibers (POF), coax based electrical physical layer, and shielded and unshielded twisted pair (STP/UTP) copper wires that meet automotive environmental requirements. Today, MOST is used in over 150 car models as the communication backbone for their information and entertainment equipment.About MOST Cooperation The MOST Cooperation (MOSTCO) is the organization through which MOST Technology is standardized and refined so that it continues to stay abreast of the latest industry requirements. Today it consists of 16 international carmakers and more than 60 key component suppliers. They have joined together to work with the MOST Technology and to contribute to its innovation. The MOST Cooperation is prepared to embrace efforts to further develop and standardize the technology for other industries and to establish the corresponding work structures. The MOST Cooperation was founded in 1998 to standardize MOST Technology as a global standard for multimedia networking. Audi, BMW, Daimler, HARMAN and Microchip Technology are its core partners and constitute its Steering Committee. For more information see http://www.mostcooperation.com.Media Contact: Mandy Ahlendorf, ahlendorf hueggenberg gbr Phone +49 8151 555009 11, MOSTCO_PR(at)mostcooperation.comMOST Cooperation · Bannwaldallee 48 · 76185 Karlsruhe Germany Phone +49 721 966 50 00 contact(at)mostcooperation.com · www.mostcooperation.com