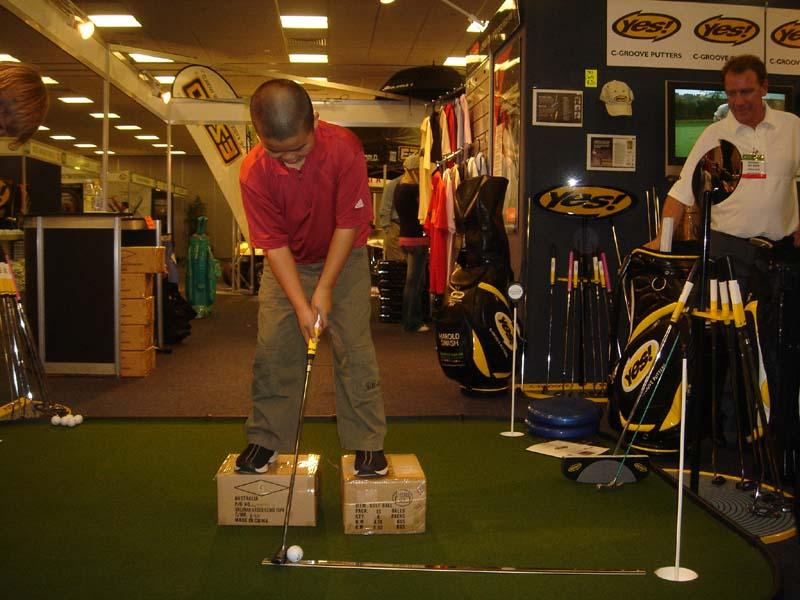 Tiger Lee practicing with the Rail invented by Harold Swash at the Australian PGA Show in Broadbeach, Surfers Paradise

You are never too old or too young to learn was shown recently when Tiger Lee (yes that’s his real name!) sought the advice of established putting coach Harold Swash. The diminutive 11 year old who his hoping to follow in his namesake’s footsteps, not only as a promising youngster but also as a worldwide superstar took the opportunity to work with the coach to many of Europe’s top stars recently at the Royal Pines Resort in Queensland, Australia,Over in Australia to conduct Accredited Instructor Training to local PGA coaching professionals, Harold and the team of Phillip Kenyon and Michel Monnard were on hand at the exclusive resort to pass some vital insights to members of the golfing public.Tiger was accompanied by his encouraging parents who saw the opportunity that most of us miss out on, or tend to ignore, in terms of establishing the key fundamentals for the most important part of the game.As well as working on his technique Tiger was also fitted into his own Yes! Golf C Groove putter to suit his set up and encourage the correct putting mechanics. The complimentary putter was supplied by Yes! Golf Distributor, Champions Sports.John Harris Managing Director of Champion Sports was on hand at the event. “The importance of having a putter fitted properly cannot be overstated, its great for us to be hear here today with Harold (the designer of the putter) to help support the clinics that the Schools are conducting whilst over here in Australia. It’s also great for us to support junior golf. We are a great believer in trying to make people better players, or more importantly better putters, not just selling people putters. That’s why we have been supporting the Harold Swash Accredited Instructor scheme also. We need to help promote part of the game that is too often ignored by most club pros”After spending 2 hours with the young prodigy, Harold Swash was enthused to see such natural talent and a display of composure beyond Tigers years. ‘Look’s like we will be hearing that name Tiger for a lot more years to come he was heared saying’.Swash Putting Schools Asia/Pacific, Australia, South Africa, Middle East Oakrig House Canning Road Southport Merseyside England United Kingdom PR9 7SW Contact: Michel Monnard, C./Llum 10, 07580 Capdepera (Mallorca/Spain) Email: michel@swashputtingschools.com Phone: 0034 639635634The Harold Swash Putting School of Excellence is one of the leading Putting Instruction Golf Schools in the world. Harold Swash has coached many of the top professional and amateur golfers with his innovative putting training techniques including Padraig Harrington , David Howell, Thomas Levet, Darren Clarke , Ian Woosnam , Constantino Rocca, Robert Jan Derksen and Nick Faldo. The Swash Putting Schools deliver 2 day training for Golf Professionals to become an Accredited Instructor. There is 3 levels of instructors. In conjunction with Yes! Golf, the company behind the Yes C-Groove Putter, the Swash Putting Schools operate world wide.

You can edit or delete your press release Tiger Lee, a promising young golfer in Asia receiving Putting Instruction from Harold Swash here