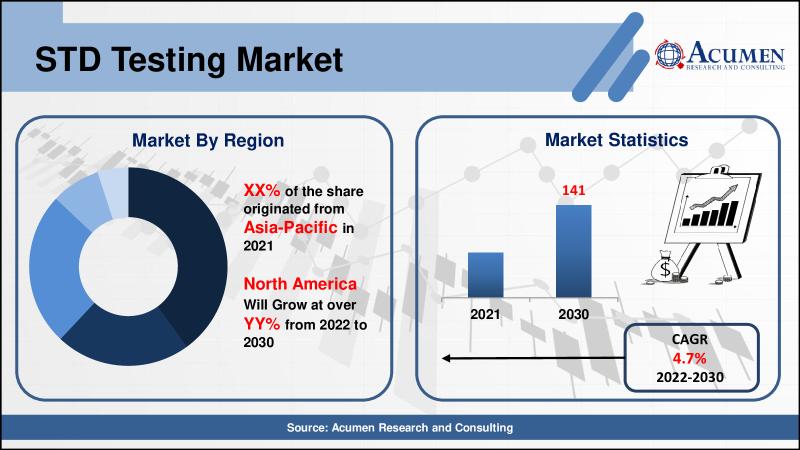 The Global STD Testing Market Size is valued at USD 95 Billion in 2021 and is projected to reach a market size of USD 141 Billion by 2030; growing at a CAGR of 4.7%.Sexually transmitted diseases (STDs) or sexually transmitted infections (STIs) are among the top five reasons that sexually active adults seek medical attention in underdeveloped countries. Young adults (15 to 24 years old) are more susceptible to STIs than older adults. According to the World Health Organization, one in twenty adolescents develops an STI each year, and 20% of people living with HIV/AIDS are estimated to be in their 20s. According to the WHO, more than one million people worldwide contract STIs every day. Sexually transmitted infections have a direct impact on sexual and reproductive health by causing infertility, stigma, cancer, and pregnancy complications, as well as increasing the risk of HIV.Request For Free Sample Report @ https://www.acumenresearchandconsulting.com/request-sample/3052COVID-19 Impact on the Global STD Testing Market ValueThe pandemic of COVID-19 had a negative impact on the STD testing industry. The CDC reported a decrease in STD testing during the early months of COVID-19 due to disruptions in healthcare and STD testing services. As a result of reduced testing and diagnosis, some people may have unwittingly spread the infection. Thus, even though the spread of STDs increased during the pandemic, the market value suffered as a result of the reduction in testing. As the lockdown and travel ban were lifted, STD testing increased, and the market is expected to perform well in the coming years.Increasing cases of sexually transmitted infections globally fuel the industry's growthSexually transmitted infections have a significant impact on sexual and reproductive health around the world. In 2019, adolescents and young adults aged 15-24 years accounted for more than 55% of reported cases of sexually transmitted diseases. The World Health Organization (WHO) reported over 374 million cases of one of four STIs in 2020. Chlamydia acquired the most cases (129 million), followed by gonorrhea, syphilis, and trichomoniasis. Human Papillomavirus (HPV) infections were linked to 570,000 cases of cervical cancer and over 311,000 deaths from the disease in 2018. Every year, over 20 million new STD infections occur, according to the Cleveland Clinic. In 2019, an estimated 820,000 people died from hepatitis B, mostly from hepatocellular carcinoma and cirrhosis. As a result of unprotected sex, a lack of awareness, and multiple partner intimacy, the prevalence of all of these infections among people is rapidly increasing. As a result, testing for STDs is becoming more widespread, thereby supporting market growth.Check the detailed table of contents of the report @ https://www.acumenresearchandconsulting.com/table-of-content/std-testing-marketThe social stigma associated with patients for STD testing restricts the market growthMany sexually transmitted diseases are said to be socially stigmatized. In other words, individuals are judged or criticized for having STDs. Other types of disease may also be stigmatized socially. However, the STD stigma is frequently extremely strong. HIV stigma refers to negative beliefs and attitudes about HIV-positive people. It is the negative attitudes that come with labeling an individual as a member of a socially unacceptable group. People are afraid of contracting HIV due to a lack of information and awareness, as well as outdated beliefs. Furthermore, many people believe that HIV is a disease that only specific groups are susceptible to. This leads to negative moral judgments about HIV-positive people. People living with HIV frequently internalize the stigma they face and create a negative self-image. They may be afraid of being judged or discriminated against if their HIV status is revealed.STD Testing Market SegmentationThe global market has been segmented into three categories: disease type, location of testing, and region.The market is divided into gonorrhea, chlamydia, herpes simplex virus, human papillomavirus (HPV), syphilis, and other diseases based on disease type (HIV, hepatitis B, chancroid, and trichomoniasis). In 2021, Chlamydia accounted for a sizable market share. However, HPV infection is expected to increase significantly between 2022 and 2030. In 2019, the CDC received 616,392 reports of gonorrhea, making it the second most common reportable condition in the United States.The market is divided into two segments based on testing location: laboratory testing and point of care testing. Laboratory testing held the largest market share in 2021, while point of care testing is expected to grow at the fastest rate in the years ahead, from 2022 to 2030.STD Testing Market Regional OutlookThe global STD Testing market is divided into five regions: North America, Asia-Pacific, Europe, Latin America, and the Middle East and Africa. According to the regional analysis, the Asia-Pacific region is likely to retain a significant market share in 2021 and the future. The Asia-Pacific STD testing market is being propelled by an increase in the number of STI cases, an increase in the youth population, a lack of awareness, and rising government initiatives.North America, on the other hand, will experience significant growth in the coming years due to the presence of key players, the availability of technologically advanced products, and the rising adoption of point of care testing.Buy this premium research report - https://www.acumenresearchandconsulting.com/buy-now/0/3052STD Testing Market PlayersSome prominent STD testing companies covered in the industry are Abbott Laboratories, Affymetrix, Alere Inc., bioMérieux, Inc., Becton Dickinson and Company, Bio-Rad Laboratories, Inc., Cepheid Inc., Danaher Corporation, DiaSorin, Hologic Inc., Orasure, and Roche Holdings AG.201, Vaidehi-Saaket, Baner - Pashan Link Rd, Pashan, Pune, Maharashtra 411021Acumen Research and Consulting (ARC) is a global provider of market intelligence and consulting services to information technology, investment, telecommunication, manufacturing, and consumer technology markets. ARC helps investment communities, IT professionals, and business executives to make fact based decisions on technology purchases and develop firm growth strategies to sustain market competition. With the team size of 100+ Analysts and collective industry experience of more than 200 years, Acumen Research and Consulting assures to deliver a combination of industry knowledge along with global and country level expertise.

12-18-2020 | Advertising, Media Consulting, …
GLOBAL INFO RESEARCH
Global STD Diagnostics Market Overview Report by 2020-2025
Scope of the Report: The global STD Diagnostics market size is expected to gain market growth in the forecast period of 2020 to 2025, with a CAGR of xx%% in the forecast period of 2020 to 2025 and will expected to reach USD xx million by 2025, from USD xx million in 2019. Market segmentation STD Diagnostics market is split by Type and by Application. For the period 2015-2025, the growth among segments
03-18-2020 | Fashion, Lifestyle, Trends
Julongsoft pvt ltd
Does STD-Meet.com hold reasons to begin further in love?
Multiple reasons come into the vicinity with references to the use of STD dating website. Where the world is on the verge of online dating, it is also vital to drive something similar for the STD singles as well. Plus, the user is always anxious to know about the potential reasons in order to get the definition in one shelf. STDMeet is a dating site that allows people suffering from
11-29-2019 | Health & Medicine
WISEGUY RESEARCH CONSULTANTS PVT LTD
STD Diagnosis Market Segmentation, Application, Technology & Market Analysis Res …
Global STD Diagnosis Industry New Study On “2019-2022 STD Diagnosis Market Global Key Player, Demand, Growth, Opportunities and Analysis Forecast” Added to Wise Guy Reports Database Market overview The Global STD Diagnosis Market research includes profiling of different companies in order to better understand the key drivers, restraints, challenges, and opportunities of this market. The prospects provided in the report are based on data that have been included by analysts so as to
09-16-2019 | Health & Medicine
STD Carriers Disease Control and Prevention Services
STD Registry Back Online After Nearly a Decade
The original sexually transmitted disease (STD) carrier registry is back online after the better half of decade. During that time site inspired imitators that came and went. In 2008 STDCarriers.com was nationally recognized as the first website dedicated to helping the public expose dangerous individuals with STDs online. By 2012 the site had been visited by millions of people and thousands of them used STDCarriers.com to report those they said were
05-14-2018 | Advertising, Media Consulting, …
Market Reports Center
STD Diagnostics Market - Recent Trends, Development,Growth & Forecast 2025
MRC has released its latest research-based report entitled ‘STD Diagnostics market.' This comprehensive report provides a holistic approach to the market growth with a detailed and precise analysis of the overall competitive scenario of the STD Diagnostics market worldwide along with the key trends and latest technologies, playing a prominent role in the STD Diagnostics market growth over the predicted period. It also takes into account the market trends, aspects
09-04-2017 | Business, Economy, Finances, B …
Global STD Diagnostics Market
Global STD Diagnostics Market Professional Survey Report 2017
The Global STD Diagnostics Market Professional Survey Report 2017 is a professional and in-depth study on the current state of the STD Diagnostics industry. Firstly, the report provides a basic overview of the industry including definitions, classifications, applications and industry chain structure. The STD Diagnostics market analysis is provided for the international market including development history, competitive landscape analysis, and major regions’ development status. Secondly, development policies and plans are discussed as well as manufacturing processes and cost
Comments about openPR
Your portal is fast, simple, and easy to use. Others may have more functions but they also demand more editing time, you have to preformat the text in order to achieve a good result etc. I think openPR is really fantastic!
Andreas Knepper, wallmedien AG