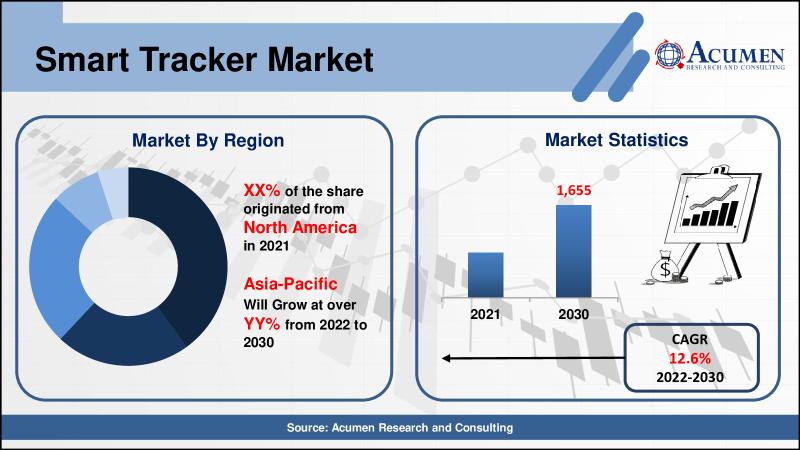 The Global Smart Tracker Market Size valued for USD 583 Million in 2021 and is projected to reach a market size of USD 1,655 Million by 2030; growing at a CAGR of 12.6%.Globally, rising women's safety concerns have boosted the smart tracker market revenue. Women's safety is the most concerning issue, as a crime against women is increasing all over the world. Statistics support this, as the crime rate against women is alarmingly high. Considering this a number of women's safety apps are developed and released in countries that have high crime rates. As a result, the Indian government along with leading software companies has developed several apps that focus on women's safety. The primary feature of these apps included a smart tracker, thereby fueling the industry demand. Some of the top apps are Namola App, Grannus, SHEROES, CitizenCOp, etc.Request For Free Sample Report @ https://www.acumenresearchandconsulting.com/request-sample/3011Global Smart Tracker Market Growth AspectsAccording to our smart tracker industry analysis, the rising number of Smartphone owners will support the market growth. This will be primarily driven by high-end Smartphone owners such as iPhone and Samsung. To prevent the stealing and misplacing of iPhones, in April 2021 Apple launched AirTag - an accessory that works with Apple's Find My app to help a user to keep track of and find the things that are important to them. AirTag, whether connected to keys, handbags, backpacks, or other items, connects to the vast, global Find My network and can assist in the recovery of a misplaced item, all while keeping location information private and anonymous through end-to-end encryption.However, lack of standardization and major connectivity issues will hamper the market from growing. For instance, the downside of Bluetooth trackers is that they are short-range, so they can only track something that is nearby. Additionally, there are hundreds and thousands of smart tracker apps present on open platforms. However, these apps are not reliable and have connectivity issues. Furthermore, a threat from cybercriminals such as data and privacy theft could also hinder the smart tracker market growth.Rising incidences of losing items or forgetting them primarily fuel the smart tracker industryAn estimated 19% of items are lost on public transportation worldwide. Every year, 80 million items of luggage are lost at airports around the world. Every 53 seconds, a laptop is stolen. Over half (56%) of laptop owners accidentally leave their laptops on a monthly basis. Every year, 70 million Smartphone's are lost, with only 7% recovered. Every year, 4.3% of company-issued mobile phones are lost or stolen. Data breaches account for 80% of the expense of a lost laptop. 52% of devices are stolen at work, and 24% are stolen at conferences. Millions of products are lost or stolen each year in the United States. The average person lost nine items per day, according to the survey. That works out to nearly 3,300 items per year. 12,000 laptops are lost each week in US airports.Check the detailed table of contents of the report @ https://www.acumenresearchandconsulting.com/table-of-content/smart-tracker-marketThe growing adoption of pet trackers creates an opportunity for the industryPet trackers are typically divided into two types: GPS trackers that use mobile networks and radio-frequency trackers that do not require any added signals or networks. Most pet trackers are simply attached to the animal's collar, but others can be the entire collar. The number of lost pets increases year after year. According to the ASPCA's lost pet statistics, there are 78.2 million dogs and 86.4 million cats in the United States. According to the above statistics, the number of lost owned pets that end up in foster homes each year ranges between 5 and 7 million! Pet trackers are primarily intended to assist us in monitoring location by utilizing a tracking transmitter on the pet and a receiver for the owner.Smart Tracker Market SegmentationThe global market has been divided into three sections: technology, application, and region. The technology segment is further split into Bluetooth, cellular, GPS, and others. As per our smart tracker industry analysis, the Bluetooth segment will hold a significant market share during the forecast timeframe from 2022 to 2030.Furthermore, the applications considered in this report include consumer products, pets, and luggage. Among them, the consumer products segment achieved a considerable market share in 2021 and is expected to continue its trend in the coming years. However, the pet smart trackers will witness an impressive growth rate throughout the projected timeframe from 2022 to 2030.Smart Tracker Market Regional OutlookNorth America, Asia-Pacific, Europe, Latin America, and the Middle East & Africa are the regional classification of the global smart tracker market. North America accounted for the maximum market share in the regional scenario owing to the early adoption of technologies, and an increasing number of lost and misplaced items in the region. In addition, high purchasing power and increased awareness among consumers about these devices are also supporting the North America smart tracker market share.However, the Asia-Pacific smart tracker market is likely to witness the fastest growth from 2022 to 2030. The rising number of Smartphone's and tablets & laptops, increasing adoption of the internet of things (IoT), and rising women's safety are some of the factors fueling the APAC market.Buy this premium research report - https://www.acumenresearchandconsulting.com/buy-now/0/3011Smart Tracker Market PlayersSome prominent smart tracker companies covered in the industry include Chipolo doo, Kaltio Technologies Oy, PB Inc., Innova Technology LLC, LugLoc, Mars Inc., Qorvo Inc., Tile Inc., Samsung Electronics Co. Ltd., and TrackR Inc.201, Vaidehi-Saaket, Baner - Pashan Link Rd, Pashan, Pune, Maharashtra 411021Acumen Research and Consulting (ARC) is a global provider of market intelligence and consulting services to information technology, investment, telecommunication, manufacturing, and consumer technology markets. ARC helps investment communities, IT professionals, and business executives to make fact based decisions on technology purchases and develop firm growth strategies to sustain market competition. With the team size of 100+ Analysts and collective industry experience of more than 200 years, Acumen Research and Consulting assures to deliver a combination of industry knowledge along with global and country level expertise.

11-20-2021 | IT, New Media & Software
Coherent Market Insights
Smart Cities Market is Expected to Witness CAGR of 17.3% by 2027 with Applicatio …
A smart city is an urban unit or area that uses various types of electronic Internet of Things (IoT) devices to collect data and then use the insights to manage resources, assets, and services effectively. Green building is a growing trend in the global smart cities market. Constructing eco-friendly infrastructure facilities can provide a sustainable environment in the cities. Moreover, governments are focused on constructing energy-efficient buildings, in order
02-26-2019 | Advertising, Media Consulting, …
Planet Market Reports
Global Smart Cities Market by Component (Hardware, Software) by Application (Sma …
Global Smart Cities Market: Overview The global smart cities market is expected to reach a mark of over USD 3000 billion by 2024, at a CAGR over 21% during the forecast period. Significant growth in next-generation technologies such as artificial intelligence AI, personalized healthcare, sustainable energy generation and robotics are driving the smart cities’ future. Moreover, the increase in residential preference towards the adoption of advanced information and communication technologies ICT
07-11-2018 | Media & Telecommunications
MarketResearchReports.biz
Survey Report on Smart Kitchen Appliances Market 2018: Smart Refrigerator, Smart …
The report analyzes and presents an overview on "Global Smart Kitchen Appliances Market Professional Survey Report 2018" worldwide. This report studies Smart Kitchen Appliances in Global market, especially in North America, China, Europe, Southeast Asia, Japan and India, with production, revenue, consumption, import and export in these regions, from 2013 to 2018, and forecast to 2025. The study objectives of this report are: To study and forecast the market size of Smart
03-15-2018 | Advertising, Media Consulting, …
Transparency Market Research
IoT Device Management Market Analysis by Application - Smart Manufacturing, Smar …
IoT device management comprises of multiple operating systems and several varieties of communication methods and protocols targeted at conducting smooth functioning of smart devices. The service of IoT device management has become vital for the business sector in recent years due to the rising use of remote operation in a number of industries and the subsequent need to manage the operation of the devices. The global IoT device management market is
08-01-2017 | Logistics & Transport
Palau International Ship Registry
SMART SHIPS NEED SMART REGISTRIES
The shipping world needs to wake up and embrace the philosophy of smart shipping because it is already here and the downturn in the world economy is not going to last forever, according to Panos Kirnidis, CEO of the Palau International Ship Registry. “The maritime industry knows that smart ships and smart technology is the way forward and yet there seems to be reluctance on the part of some owners to
07-20-2017 | IT, New Media & Software
Smart Kitchen Appliances
Smart Kitchen Appliances Market : Smart Refrigerators, Smart Dishwashers, Smart …
Albany, New York, July 20, 2017 : Recent research and the current scenario as well as future market potential of "Smart Kitchen Appliances Market (Products - Smart Refrigerators, Smart Dishwashers, Smart Ovens, Smart Cookware and Cooktops, Smart Scales and Thermometers and Others) - Global Industry Analysis, Size, Share, Growth, Trends and Forecast 2014 - 2022" globally. Smart kitchen appliances are premium appliances that are designed for comfortable and efficient operation as
Comments about openPR
9 o'clock: discuss press release with client, 10 o'clock: submit release to openPR, within the briefest possible time release is published and displayed in a prominent place on openPR.de. I am thrilled!
Zehra Spindler, Calypso Now! - Communication Agency