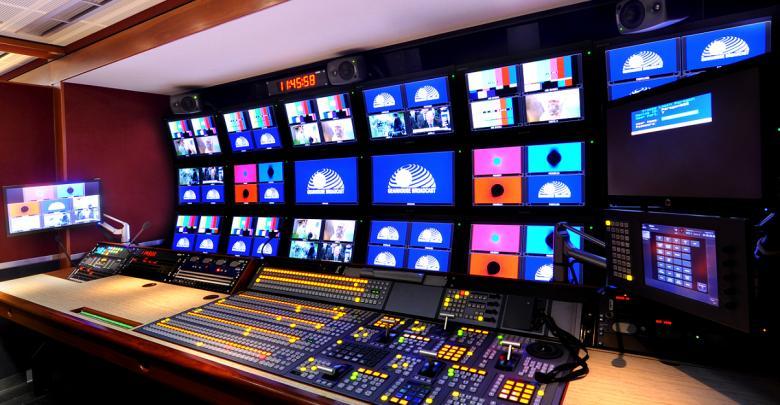 10-21-2021 | Media & Telecommunications
Coherent Market Insights
Internet protocol television (IPTV) is the future of television broadcasting
IPTV Market Forecast : The global IPTV market is estimated to account for US$ 269.9 Billion by 2027 𝗥𝗲𝗽𝗼𝗿𝘁 𝗣𝗮𝗴𝗲𝘀: [135 Pages] Internet protocol television (IPTV) is a video broadcast technology that delivers television content over internet protocol networks. IPTV differs from satellite, cable, and conventional terrestrial television formats. IPTV fits perfectly with the concept of Internet-of-Things (IoT) and other ITC trends. On-demand live TV programs or stored video content are delivered
12-31-2018 | Media & Telecommunications
Adroit Market Research
Television Broadcasting Market 2018-2025 Analysis by Major Players: LLC, AT & T, …
The global television broadcasting market size was valued at $xxxx billion in historical year 2017 and is expected rise at a significant CAGR of xx% in terms of revenue by the end of the forecast spell (2018-2025). Major factor driving the market is rising demand for HD (high definition) content as well as advertisement. Nowadays, OTT (Over the top) services as well as production studios are having huge demand from
10-04-2018 | Media & Telecommunications
Red Stick Warrior
Bundle Your Television and Phone
October 3, 2018 There’s no shortage of companies offering television or even Video on demand (VOD) and phone packages of all different kinds, but the thing they share in common is being stuck in the past, not realizing the internet is the present and future of all kinds of communication and entertainment savings. Red Stick Wireless is the exception to the rule having established their brand with the full belief that
08-07-2018 | IT, New Media & Software
MRRSE
Television Broadcasting Services Market| British Broadcasting Corporation, CANAL …
Growing digitalization (digital migration) and consumption of digital content has changed the medium and mode of these being consumed and/or delivered to customers. Amidst this space, across the television industry, there has been swift shift in the demand and supply trend. These changes are driven by both push from regulatory changes and technology augmented cost effective solutions and services. This report by MRRSE provides insights to how the ecosystem has
01-17-2018 | Media & Telecommunications
Brushwood Media Group, Inc.
Streaming Television Inc. and Brushwood Media Group Inc. Form Strategic Partners …
Atlanta, GA: Streaming Television, Inc., has revolutionized the home entertainment industry, providing viewers with an almost unlimited supply of content. The resulting need for new and exciting programs constitutes a great opportunity for content creators. Every day, people across America are replacing their cable television service with one of the top 3 connected television streaming devices, Amazon Fire TV, Roku TV or Apple TV.  This immediately disconnects that household from
12-10-2011 | Media & Telecommunications
Pikimal
3D Products Expand Beyond Television
There's been an exceptional amount of hype surrounding 3D technology this year. Most blockbusters are released to theaters in 3D. EPSN launched its 3D television network in the U.S., and video-gamers can play 3D games on a personal device with no glasses required. Most consumers are becoming familiar with the idea of the 3D television experience (whether they think it's beneficial or not), but many are not aware of
Comments about openPR
9 o'clock: discuss press release with client, 10 o'clock: submit release to openPR, within the briefest possible time release is published and displayed in a prominent place on openPR.de. I am thrilled!
Zehra Spindler, Calypso Now! - Communication Agency