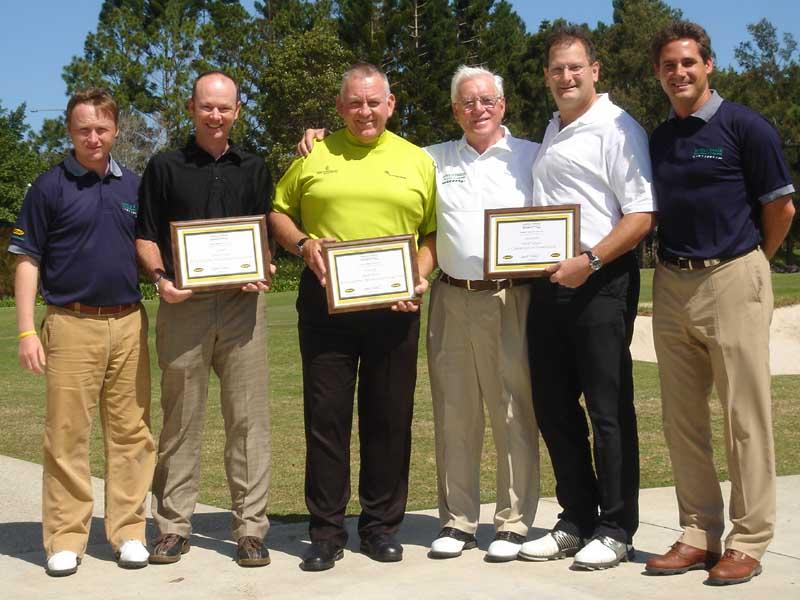 Making Harold Swash's teaching method world wide available for all golfer is the main goal of our trip to Australia. In conjunction with Yes! Golf and their C-Groove Putters, Harold Swash, Phil Kenyon and Michel Monnard travelled all the way down under. Harold Swash and Phil Kenyon have returned home after a busy but successful 2 week trip to Australia. Michel Monnard is in Dubai for another week of presentations and to prepare for the upcoming Accredited Instructors Scheme in january at the Dubai Desert Classic. The team have just attended the Australian PGA show and conducted their first ‘HSPSE Level One Accredited Instructor’ training programme in the southern hemisphere. The PGA show is the annual trade show for PGA pro’s and industry figures in Australia. HSPSE were invited to deliver a range of seminars at the show, and in it’s build up, to PGA pros on the school’s putting fundamentals and the Harold Swash Accredited Instructors Scheme. The show was a huge success with Harold Swash himself making several personal appearances on the Yes Golf stand where he was co promoting the Yes! Golf C Groove Putter he created. After the show the hardwork continued at the exclusive Royal Pines resort where HSPSE held their Level One Accredited Instructors training programme. Two of the attendees on the programme where Mark Gibson and Glenn Joyner. Mark Gibson is a 2 time winner of the Australian PGA coach of the year and a well respected figure in Australian Golf. Glenn Joyner has been a touring pro worldwide for over 20 years and as teaching pro as been sought after on the short game through the reputation he build up in this area as player. Both were extremely complimentary on what they gleaned from working through the programme with Harold Swash, Phil Kenyon and Michel Monnard. Mark Gibson stated that the 2 days represented ‘One of the most significant moments in his teaching career’ while Glenn found the course a revelation and total value for any coaching professional that was eager to understanding the true fundamentals of putting and develop himself as a coach. The success of the PGA show seminars and instructor training has already led the team committing to return to Australia to conduct further training in Dec 2007. The planned dates are to coincide with the Australian Open in Sydney at a venue to be confirmed. For those PGA golf professionals regardless of there nationality or location wishing to attend please contact us through our contact form. Swash Putting Schools Asia/Pacific, Australia, South Africa, Middle East Oakrig House Canning Road Southport Merseyside England United Kingdom PR9 7SW Contact: Michel Monnard, C./Llum 10, 07580 Capdepera (Mallorca/Spain) Email: michel@swashputtingschools.com Phone: 0034 639635634 The Harold Swash Putting School of Excellence is one of the leading Putting Instruction Golf Schools in the world. Harold Swash has coached many of the top professional and amateur golfers with his innovative putting training techniques including Padraig Harrington , David Howell, Thomas Levet, Darren Clarke , Ian Woosnam , Constantino Rocca, Robert Jan Derksen and Nick Faldo. The Swash Putting Schools deliver 2 day training for Golf Professionals to become an Accredited Instructor. In conjunction with Yes! Golf, the company behind the Yes C-Groove Putter, the Swash Putting Schools operate world wide.