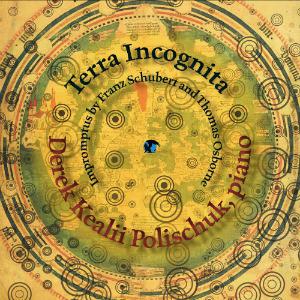 “Terra Incognita” - a new solo piano CD from the Blue Griffin label (BGR 301) features acclaimed pianist Derek Kealii Polischuk (associate professor of piano and director of piano pedagogy at the Michigan State University College of Music) as he presents an intriguing juxtaposition of the traditional and the new.The album offers Schubert’s legendary Four Impromptus D. 935 Opus. 142, coupled with a world premiere recording of a new work commissioned by the pianist specifically for the purpose of serving as a companion to the Schubert master pieces – the four movement “Terra Incognita” by Thomas Osborne. Taking its title from terminology used in Medieval map-making, “Terra Incognita,” which translates to “unknown land,” is a term often encountered in the far edges of the map, where science blends with the map-maker’s imagination. These fascinating documents are the main inspiration for the work, as Osborne invites the listener to join the pianist on his journey to the far boundaries of piano playing, applying untraditional techniques and stirring the imagination. Like Schubert’s Impromptus D. 935, “Terra Incognita” consists of four works. As their titles would suggest, each work in some way presents a relation to the fascinating maps of old, as well as a connection to the Schubert works, be it direct or not.The complete tracks are as follows:Franz Schubert (1797-1828) Four Impromptus, D. 935, Op. 142 1 I. Impromptu in F minor. Allegro moderato 2 II. Impromptu in A-flat Major. Allegretto 3 III. Impromptu in B-flat Major. Andante 4 IV. Impromptu F minor. Allegro scherzandoThomas Osborne (b. 1978) The Ends of the Earth. Four Impromptus (2011) 5 I. Terra Incognita 6 II. Mare Incognitum 7. III. Terra Pericolosa 8. IV. Terra Nullius“Terra Incognita” was recorded at Blue Griffin’s Studio The Ballroom, produced and engineered by Sergei Kvitko, and is available at www.BlueGriffin.com, as well as other online and physical retail outlets.BACKGROUND INFORMATION:Pianist Derek Kealii Polischuk is associate professor of piano and director of piano pedagogy at the Michigan State University College of Music. Praised by critics as a “consummate keyboard artist” and an “important young talent,” Polischuk has received critical acclaim for his performances in California, throughout the Midwest and South, and in Hawaii at the Prince Albert Chamber Music Festival. Born in San Diego, Polischuk studied with Krzysztof Brzuza before attending the University of Southern California Thornton School of Music, where he received the Doctor of Musical Arts degree with distinction under the tutelage of renowned piano pedagogue and concert artist Daniel Pollack.An enthusiastic supporter of the education of young musicians, Polischuk has presented at meetings of piano teachers across the United States and Canada and teaches a studio of prizewinning pianists in East Lansing. At Michigan State University, Polischuk has been the recipient of the Curricular Service-Learning and Civic Engagement Award, and the 2013 Teacher-Scholar Award, given to a select number of early-career professors from across the university for exceptional skill in teaching.Thomas Osborne’s music draws inspiration from a wide variety of sources, places and eras. As a composer interested in the possibilities of both Western and non-Western music, he has written works inspired by African polyphony, Indonesian gamelan, Japanese court music, ancient Persian music and Kentucky country fiddle playing.Raised in Greenfield, Indiana, he went on to study with his principle teachers Edward Applebaum, Claude Baker, Donald Crokett, Don Freund, Arthur Gottschalk and Stephen Hartke. His music has been performed by a wide range of ensembles and soloists, including the Pittsburgh New Music Ensemble, the New York Youth Symphony, Korean gayageum soloist Ji-Young Yi, the Pacific Symphony, and pipa artist Yang Jing.Osborne has lived in Honolulu since 2006, and is associate professor of composition and theory at the University of Hawaii. He is active as a conductor, and directs the University of Hawaii Contemporary Music Ensemble.A classical music recording company's press representative7314 21st avenue apt 4D Brooklyn, NY 11204