Crucial Building Block for Many Products: Ceresana Presents the First Complete Analysis of the Market for Styrene 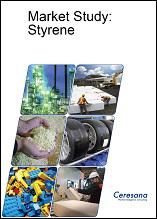 Styrene is an important product in the petrochemical industry and used to manufacture a broad range of day-to-day products. The importance of styrene is reflected by the revenues generated with this product: market value amounted to about US$41.8 billion in 2012. In the recently published study, the market research institute Ceresana comprehensively analyzes and describes the development of the global market for styrene.Diverse Applications for StyreneAbout 40% of the styrene consumed worldwide in 2012 were processed into polystyrene. Polystyrene is used in the manufacturing of food packaging as well as electrical and electronic devices. The global economy will continue to recover during the next few years and thus provide the framework for a moderate increase of demand for this plastic. Yet demand for polystyrene will not increase as dynamically as demand for other standard plastics due to a change in technologies and advancing substitution processes. Market researchers at Ceresana forecast global demand for styrene in the production of polystyrene to rise by, on average, 2.3% per year. The second largest sales market for styrene is expandable polystyrene (EPS), which is used as insulation material in new residential units and the refurbishment of old buildings, among others. Styrene based engineering plastics such as acrylonitrile-butadiene-styrene (ABS) are used by, e.g., the automotive and electronics industry. Other applications are styrene-butadiene rubber (SBR), styrene-butadiene latex (SBL), and unsaturated polyester resins (UPR). "The segments ABS and EPS are likely to provide the largest growth impulses in the future. Demand in these segments is projected to increase by 4.1% and 3.8% p.a. respectively until 2020", forecasts Oliver Kutsch, CEO of Ceresana. While the ABS industry is still in the initial stage in many emerging countries with excellent growth prospects, producers of EPS in several industrialized countries are able to profit from state-subsidies to increase energy efficiency.Significant Potential in Emerging CountriesIn the end, consumption of styrene depends on the demand of consumers for the different styrene based products. Thus, emerging countries exhibiting strong economic growth and a rising income offer a considerable potential. Conditions as propitious as these attract investment in the expansion of the downstream styrene industry. As result, demand for styrene in some countries will rise significantly. An example for a development of this kind is China. During the past eight years, demand for styrene in this country rose by 9.6% per year. Thus, China is the worldwide largest sales market, accounting for about 31.5% of market shares in 2012. The USA followed at a considerable distance, after demand for styrene fell by, on average, 1.9% p.a. since 2004.Relocation of Styrene ProductionGlobal production of styrene is increasingly relocating to emerging countries, while developed industrialized regions considerably reduced capacities in the last few years. This is especially true for Western Europe and the USA. This shift was triggered by a previous excessive increase of production capacity at a time when demand for styrene rose at less dynamic rates or even declined in the aftermath of the global economic crisis. An effect of this process was the decline of global capacity utilization to 75% in 2009. While production capacities were relocated, degree of global capacity utilization rose again. This development is likely to continue. The highest relative increase of styrene production until 2020 will occur in South America and the Middle East. The production capacity in these countries with extensive crude oil resources will increase to approx. 4.8 million. Ceresana expects output in South America to increase by, on average, 13.4% p.a. during the next eight years.The Study in Brief:Chapter 1 is a description and analysis of the global market for styrene. Demand, revenues, and production are explained in detail. Additionally, data on existing and future production capacity is provided. It also offers an extensive insight into the development in individual countries and regions. Chapter 2 examines the 23 largest countries of the market in more detail and provides information on demand, revenues, production, import, and export of styrene as well as current and future capacities. Demand for styrene is analyzed in detail split by the applications production of polystyrene (PS), expandable polystyrene (EPS), acrylonitrile-butadiene-styrene (ABS)/styrene-acrylonitrile (SAN), styrene-butadiene rubber (SBR)/styrene-butadiene latex (SBL), and Other Applications. Chapter 3 provides a detailed analysis of applications for styrene, e.g. its use in the manufacturing of polystyrene and in other applications. This study contains data on demand development, split by Western Europe, Eastern Europe, North America, South America, Asia-Pacific, and the Middle East/Africa as well as consumption figures for individual countries in these regions. Chapter 4 provides a useful directory of producers, clearly arranged according to contact details, turnover, profit, product range, production sites, profile summary, product-specific information as well as existing and future capacities at individual production sites. Extensive profiles of 67 manufacturers have been compiled, including Styrolution Group GmbH, SINOPEC Corp., Total SA, Styron LLC, PetroChina Company Limited, Royal Dutch Shell PLC, Formosa Plastics Group (FPG), Saudi Basic Industries Corporation (SABIC), and Americas Styrenics LLC.www.ceresana.com/en/Market-Studies/Chemicals/StyreneCeresana is a leading international market research and consultancy company for the industrial sector and operates branch offices in Constance, Vienna and Hong Kong. For more than 10 years, it has been supplying several thousand customers from 55 countries with up-to-date market intelligence. Extensive market knowledge creates new prospects for strategic and operational decisions. Ceresana's clients profit from practical consulting services, tailor-made single-client studies and more than 60 independent multi-client market studies. The Ceresana business analysts are specialists in markets chemicals, plastics, additives, commodities, industrial components, packaging, and construction materials.More about Ceresana at www.ceresana.comCeresana Technologiezentrum Blarerstr. 56 78462 Constance Germany Tel.: +49 7531 94293 10 Fax: +49 7531 94293 27 Public Relations: Martin Ebner, m.ebner@ceresana.com

You can edit or delete your press release Crucial Building Block for Many Products: Ceresana Presents the First Complete Analysis of the Market for Styrene here

05-27-2020 | Industry, Real Estate & Constr …
CERESANA
Flexible and robust: new Ceresana study about the global market for polyethylene …
Linear low-density polyethylene (LLDPE) is one of the most widely used types of standard plastics. Other varieties of polyethylene, especially LDPE and HDPE, are sometimes easier to process; however, LLDPE is more flexible and has a higher resistance against tearing, shocks, and punctures. These special properties are the result of the manufacturing process: copolymerization with alkenes at low temperatures and low pressure results in polymer chains with short branches only.
02-14-2020 | Industry, Real Estate & Constr …
CERESANA
Green boom: Ceresana forecasts further growth for bioplastics
Polylactic acids, starch blends, cellulose, and other bioplastics achieve significantly higher growth rates than conventional standard plastics made of mineral oils or natural gases. ,,Bioplastics can be used in a growing number of application areas," explains Oliver Kutsch, CEO of market research institute Ceresana. With its newest study, Ceresana has examined the world market for "green" polymers for the fifth time already. Analysts predict their future development to remain dynamic:
07-12-2019 | Industry, Real Estate & Constr …
CERESANA
Established Classic: Ceresana Presents Fifth Report on the Global Market for Pol …
Polypropylene is one of the world's most widely produced standard plastics, second only to polyethylene. “Polypropylene can be processed using various techniques and is used for the most diverse applications ranging from packaging to household appliances, clothing, and vehicles,” Oliver Kutsch, CEO of Ceresana, explains. The market research company analyzed the global market for polypropylene already for the fifth time. The latest report expects revenues for this type of plastic
07-11-2019 | Industry, Real Estate & Constr …
CERESANA
Green Dynamics: New Ceresana Report on the Global Printing Inks Market
Digital printing and digitization of media: The market for printing inks is affected by disruptive changes but also offers new opportunities. “Even in countries where the total demand for printing inks is stagnating or declining, there are certain growth segments,” reports Oliver Kutsch, CEO of Ceresana. The market research company already examined the global printing inks market for the third time: the different application areas and printing processes as well