Building Blocks of an Intelligent Network with Photodiode Sensors 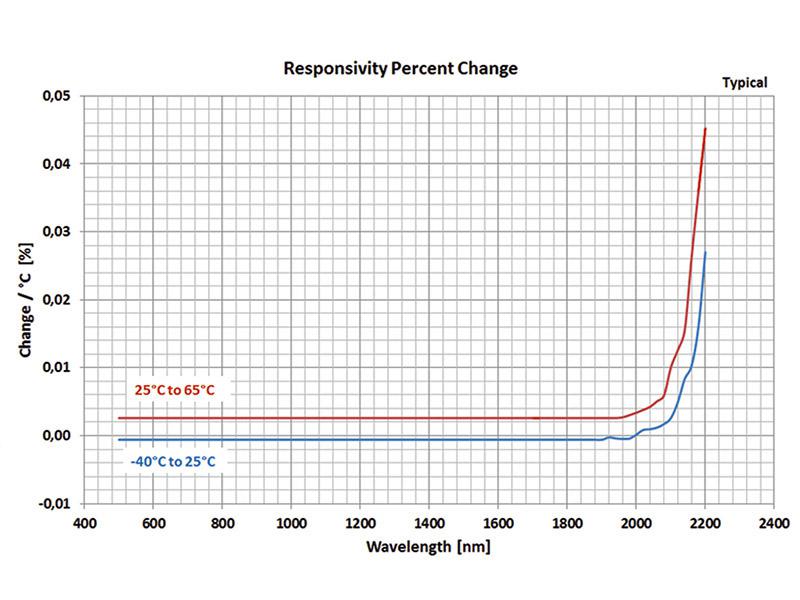 IG22 responsivity percent change in relation to the temperature

LASER COMPONENTS revamped InGaAs and extended InGaAs photodiode technolgy, which has led to the development of not only the components themselves but to groundbreaking industrial „Plug&Play“ sensors as well – the MAJOR series.The photodiode sensors have a panchromatic detector with a sensitivity range of 450 nm to 2000 nm and a reduced temperature dependence.They work reliably in (core) systems and are able to read out evidential data – e.g. data can be tagged with a time stamp. Furthermore they have a calibration option, a digital and analog output, an internal storage capacity, and are integrated in a housing with an external M12 thread. Powerful electronics have been embedded into the MAJOR-A. It offers an arithmetical averaging between measurement values, an offset correction, and the option “measure on demand“. Additional features are the automatic amplification adjustment and the programmable amplification. The built-in photodiode is also made by LASER COMPONENTS. At wavelengths below 2100 nm, the temperature coefficient of the IG22X10000S4i is less than 0.01%/K (see figure). Thus, a temperature change of 50 K results in a deviation of only 0.5%. Inside the MAJOR it is possible to improve this value again via software.More Information: http://www.lasercomponents.com/de-en/product/major-a/LASER COMPONENTS specializes in the development, manufacture, and sale of components and services in the laser and optoelectronics industry. At LASER COMPONENTS, we have been serving customers since 1982 with sales branches in four different countries. We have been producing in house since 1986 with production facilities in Germany, Canada, and the USA. In-house production makes up approximately half of our sales revenue. A family-run business, we have more than 160 employees worldwide.LASER COMPONENTS GmbH Werner-von-Siemens-Str. 15 82140 Olching / GermanyTel: +49 8142 2864-0 Fax: +49 8142 2864-11 info@lasercomponents.com http://www.lasercomponents.com/

12-06-2013 | Health & Medicine
LASER COMPONENTS GmbH
Fiber Cleaver for Large-core Fibers
LASER COMPONENTS introduces a new fiber cleaver that allows the handling of polyimide fibers. The so-called I-Cleave is developed by our partner SEDI-ATI and allows the cleaving of large-core fibers that have a core diameter from 200 µm to 1500 µm. A diamond tip is used to make a small cut on the outer diameter of the fiber, and the fiber is then broken by applying longitudinal force along the optical
10-01-2013 | Industry, Real Estate & Constr …
LASER COMPONENTS GmbH
Direct Green Laser Diodes in All FLEXPOINT® Laser Modules
Effective immediately, all FLEXPOINT® laser modules are available with green 520 nm laser diodes. The advantages compared to DPSS lasers are pretty obvious: Better stability of the optical output power, significantly faster modulation with shorter rise times, a lower temperature sensitivity, and operating temperatures up to 60°C. The 520 nm laser diodes can be integrated into all Laser Components lasers: weather it is a dot, line, or cross-hair laser. They can
11-25-2011 | Industry, Real Estate & Constr …
LASER COMPONENTS GmbH
Strategic Partnership between LASER COMPONENTS and Polymicro Technologies
LASER COMPONENTS introduces a new partner for optical fibers. Patrick Paul welcomed Polymicro General Manager James P. Clarkin to the company headquarters in Germany for signature of the new distribution contract, which applies to the entire German speaking countries and territories from 01.12.2011. „We are pleased to have gained one of the leading manufacturers of optical fibers as a new strategic partner“ commented Patrick Paul. Part of Molex Fiber