Omegans enter the Guinness World Records for the non-stop mega music marathon spanning 12 hours for a social cause. 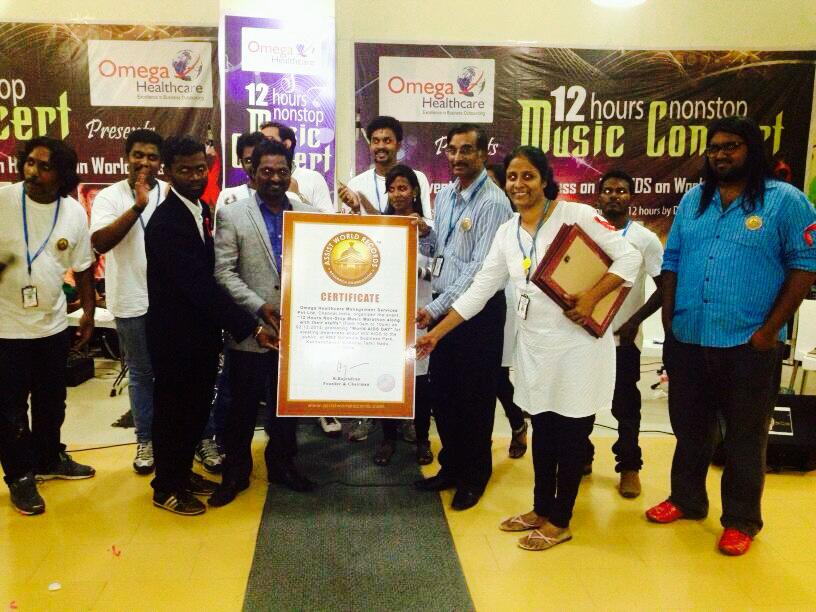 Omega Healthcare sets the trend among corporate to enter the Guinness world record for the mega music marathon. The Omegans had put together a non-stop musical performance for 12 hours to create awareness on AIDS that earned them the distinguished entry to the records. The musical marathon was rendered by in-house talents from Omega Healthcare from all the three locations- Chennai, Trichy and Bangalore, who came together for this noble attempt. Mr.Baskaran Gopalan, Vice President, Omega Healthcare Management Services, received the award from Mr.Rajenderan,Chairman of Assist World Records at 11pm confirming it as an official world record.The CEO and co-founder of Omega Healthcare, Mr. Gopi Natarajan, said “We are extremely delighted by this achievement. The meticulous planning by the Omegans and the excitement to be part of a social cause has made this a reality. Our aim is to tell the world that Omegans are different, who would stand up for a social cause and be the change needed”.Omega Healthcare plays a significant role between healthcare providers and Administrators with its rich domain knowledge that has positioned the company as the leader in the healthcare KPO/BPO industry. Started in 2004 by Gopi Natarajan (CEO and co-founder) who has 25 years of rich experience in the industry both in India and US, along with Anurag Mehta (President and co-founder), Omega Healthcare is preparing itself to handle the rapid increase in business expected over the next few years, by providing ample and continuous skills-upgrade training for its employees to achieve the very high accuracy levels that are expected by its clients. The organisation has world-class facilities both in the US (Maryland) and India (Bangalore, Chennai and Trichy). Being an equal-opportunity employer, and having an employee strength of 5,000, the Company’s operations in India ensures performance excellence at all levels. It also provides 24X7 operations to reduce turn-around-times and dedicates itself to customer satisfaction.PRHUB Integrated Marketing Communications Pvt. Ltd 3G, Lakshmi Bhavan, No.609, Anna Salai, Chennai - 600 006

You can edit or delete your press release Omegans enter the Guinness World Records for the non-stop mega music marathon spanning 12 hours for a social cause. here

10-21-2016 | Business, Economy, Finances, B …
Omega Healthcare
Omega Healthcare continues to address the need for Coders in Indian healthcare B …
Omega Medical Coding Academy (OMCA), a leading name in the medical coding training industry, has recently set up shop in Bengaluru after successfully running in Chennai and Trichy for almost 2 year. The Centre has already enrolled and commenced training the first batch of nearly 25 candidates. This first-of-its-kind business-academia collaboration will deliver high-caliber professional medical coders to cater to the expanding industry. The training program is designed for a time
09-29-2016 | Business, Economy, Finances, B …
Omega Healthcare
Confederation of Indian Industry Announces Gopi Natarajan as Entrepreneur of The …
The Confederation of Indian Industry (CII) has announced Gopi Natarajan, Co-Founder, and CEO of Omega Healthcare as the Entrepreneur of the year 2016 at CII Connect. The award recognizes Mr. Gopi Natarajan’s work in healthcare industry and his entrepreneurial success which serves as an inspiration for many young entrepreneurs. The award was bestowed by Dr. M. Manikandan, Hon’ble Minister for Information Technology, Government of Tamil Nadu in the august presence
04-26-2016 | Health & Medicine
Omega Healthcare
Omega Healthcare employee bags the prestigious ‘TOP 50 most promising CISOs’ …
Bangalore, 26th April, 2016: Nitin Gaur, Associate Director-Information Security with Omega Healthcare was honored with the Top 50 Most Promising CISO’s Award 2016 at InfoSec Maestros Awards 2016, for his outstanding performance in the information services and technology practices. The award ceremony was held at Hyderabad by Infosecuritylive.com Magazine on 17th April 2016, which was attended by representatives, who hold prestigious positions in the Information security space, from both
10-18-2007 | Business, Economy, Finances, B …
Omega Healthcare
Omega Healthcare to Expand and Invest $14 million in its India operations
Bangalore, Thursday, October 18, 2007: Omega Healthcare, a leading provider of healthcare BPO and KPO services, today announced growth plans for its Indian operations. In particular, and over the next 18-24 months, the Company will invest over $14 million to expand its Bangalore and Chennai facilities and will more than double its employee base to 3,000. Omega is among the top BPO/KPO providers in the healthcare segment, offering medical