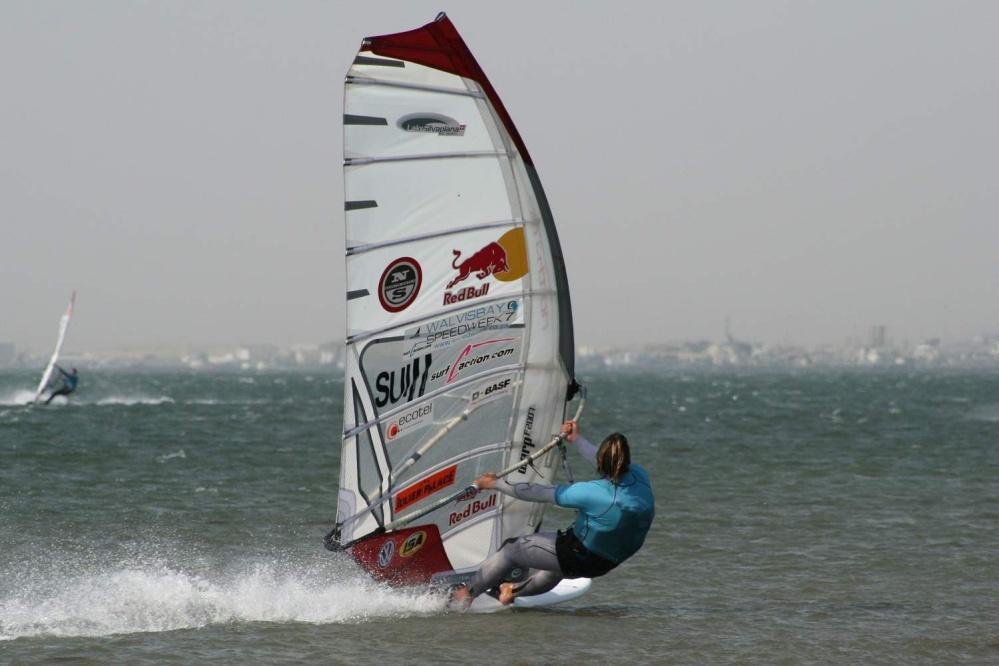 And another day of wind it was. Once again the magical Walvis Bay speedstrip provided perfect conditions for another great day of sailing.Bjorn Dunkerbeck (SUI, T1, North) dominated the Walvis Bay speedstrip setting the best speed of the day with a 41.98 knots run. Antoine Albeau (FRA) and Finian Maynard (BVI, F2) followed closely behind. Local South African hero Hennie Bredenkamp (Fanatic) had an unbelievable day and finished in fourth position. He was on top form and sailed a flawless heat. Perhaps having the support of his father, who came to watch for the day, gave him that extra boost. In the ladies race it was once again Valerie Ghibaudo (FRA, Loft Sails) who dominated.In the Overall ranking, Bjorn is clear ahead with a perfect score of 3.5 points after seven races and two discards. Second is Antoine, which brings him into the world leadership at the moment, and Patrik Diethelm (ITA, F2, North) is third, but only 0.7 points behind. Another race tomorrow can bring him into second, if he can manage to beat Antoine. Finian Maynard is fourth now, and it doesn't look like there is enough time left to strike back.Valerie Ghibaudo is also in first position with a perfect score of 3.5 points, and straight on the way to her first world title. Karin Jaggi secures a safe second place, Maaike Kallenborn (NED) is in third now after Zara Davis (GBR) had to stop racing after injuring herself in a bad crash yesterday.Tomorrow is the last official day of racing in the 500 meter category before we move on to the Nautical mile event. So tomorrow the world champions will be decided and announced at the prize giving in the evening.You can follow the daily action live on www.speedsurfing.org.For more information about the ISWC, ISA, and the ISA Speedsurfing Grand Prix TOur, please contact International Speedsurfing Association Secretary General Platanenstr. 4 14612 Falkensee Germany Fon: +49 30 2461 6930 Fax: +49 1212 5 10 60 29 02 email:isa@speedsurfing.org For direct media inquiries, high resolution pictures and video feeds, please contact directly Jan Cas Smit Fon: +31625587756 email: media@speedsurfing.orgThe International Speed Windsurfing Class is the successor to the International Speedsurfing Association, which was administering the discipline of speed windsurfing in the last three years on behalf of IFCA. Effective May 2007, the ISWC has become an ISAF international class, and thus is entitled to control all aspects of the sport and award the official world champion titles in the discipline of speed windsurfing. The ISWC is a riders association, which means that the riders itself control the development of the sport. Beside the organizing people behind the scene, the executive committee is thus completed with the riders elected representatives. Its current and past members are the “crème de la crème” of Speedsurfing worldwide. Elected chairman of the board is Peter Davis from Great Britain, enthusiastic rider and organizer of the famous Weymouth Speedweek. Executive Secretary Markus Schwendtner from Germany already controlled the speed discipline business as ISA Tour Manager, and will continue this successful task for the ISWC now. The ISWC events go from exceptional action in Namibia to more cosmopolitan spots such as Fuerteventura - the historical European Speedsurfing Capital, to huge shows of extreme conditions on small islands like Karpathos. In all, there are 200 to 300 members of the association at the same time, from places like Australia or Brasil, to Germany or Norway. The Tour has to offer: dynamic, thrilling action, and bring the most visually dynamic aquatic sports to the audience, making it a perfect vehicle to locate sponsors logos; a sport that is set outdoors, healthy and environmental friendly. Superb action on the water, combined with an interactive and exciting life experience, that creates an atmosphere where the fans and the media are face to face with the most radical and intense competition and the biggest personalities of the sport. Besides being a sport of radical action, Windsurfing is a way of life. This type of life is formed by several elements to which many aspire, but that few can really achieve. Most of, if not all of these aspects of the sport are represented in the Speedsurfing Grand Prix Tour. The ISWC is entitled to hold World, Continental and National Championships and is always looking for partners, local organizers as well as national associations, to propagate this exciting and thrilling discipline all over the world.

09-07-2007 | Sports
International Speedsurfing Association
Walvis Bay Speedweek 2007: already 6 national records broken
Once again the riders woke up to a morning of blue skies and loads of wind. The morning got off to a sluggish start as most riders felt the after effects of yesterdays gruelling two heats and the celebrations which followed the announcement of the 4 national records which were broken. The first heat of the day was underway by 13:45 in 20 – 25 knots of wind. Bjorn Dunkerbeck
09-03-2007 | Sports
International Speedsurfing Association
The ISA surf & action Walvis Bay Speedweek 2007: Day 1
On the first day of the annual Walvis Bay Speedweek, the race management allowed all riders some extra time to prepare for the official competitions, starting tomorrow. In the afternoon, atraining session was run to give the riders the possibility to finetune their equipment. In 25-30 knots of square wind, Patrik Diethelm (ITA, F2, North) set the fastest time of the day with two solid 42.3 knots runs, followed by Bjorn Dunkerbeck
09-03-2007 | Sports
International Speedsurfing Association
The surf & action Walvis Bay Speedweek 2007
Walvis Bay, Namibia is hosting the speed windsurfing world cup finals for the third time in a row, starting from the 2nd of September and delivering adrenaline-packed, thrilling action until the 9th of September. For the crème de la crème of speed windsurfing, now the battle is on for the world championship titles and new records. In the men’s fleet, all eyes are set to the reigning world champion and 500m world
08-06-2007 | Sports
International Speedsurfing Association
Fuerteventura Speedsurfing Grand Prix 2007 - Final Report
A great speedsailing event came to an end yesterday, with both event titles going away only by the last race. Finian Maynard (BVI. F2) had a clear event lead before the final day as Karin Jaggi (SUI, F2, North) had in the womens fleet. The event started calm with calima winds from the wrong direction, and all the riders, officials and spectators were cooking on the beach with 47 degree. So

05-04-2020 | Fashion, Lifestyle, Trends
Society of Single Professionals
Millionaire Speed Dating
For Immediate Release Contact: Tom Andrews, 415/479-3800 MILLIONAIRE SPEED DATING America's first-ever Millionaire Online Speed Dating Party takes place on Friday May 8, 2020, 7:30-9:30pm. Wealthy singles of all ages are invited to meet new friends safely during the
02-19-2020 | Fashion, Lifestyle, Trends
thelovemaze.com
thelovemaze.com Speed Dating Party Online!
No, it's NOT a video chat. Think of it as a "scientific crystal ball" that enables you to foresee the probability of success with each other before you fall in love, and identify your true counterpart for a happy uplifting life. "LUI", Love Under the Influence of physical attraction? How many of us are clear of that? When it comes to love, we trust our primal instinct more than anything
05-02-2018 | Health & Medicine
Celsius42
Full speed ahead – New Celsius42
Eschweiler 01.05.2018 - The relaunch of Celsius42 GmbH is just a few days away. After 4 months and many hours of work by our creative team, we look forward to publishing our new company website in the near future. “This innovation represents a true milestone for the development of Celsius42,” says Christian Hartmann, the company’s new CEO. “In addition to the remake of our corporate identity, there are many ongoing
03-31-2011 | Business, Economy, Finances, B …
Panelwarehouse.com
Panelwarehouse.com Offer High-speed Delivery
Manchester, United Kingdom (March 21, 2011) - Panelwarehouse.com, a leading manufacturer and supplier of display and exhibition stands, are offering new, quicker delivery methods to their clients. The new offer, which applies to all products Panelwarehouse.com manufactures, ensures that if clients order products from Panelwarehouse.com before 1pm, the company will prepare the order and ship it the next working day using a Nationwide Courier Service. The company offers various delivery options in
06-17-2008 | Sports
German Shuffleboard Association e.V.
Speed up for Speed Shuffleboard
Only a few days left until the start of SpeedShuffleboard League2. The hugh success of League1 made it necessary for the German Shuffleboard Association to set up another league. During the Inaugural in Germany, ISA President Gus Bondi as well as players from Brazil, Canada and Germany proved SpeedShuffleboard, a form of Turkey Shoot, to be a competitive, skill necessitating, but also fun game (see pic). Meanwhile there are not only German
08-03-2007 | Business, Economy, Finances, B …
GridwiseTech
Speed up your calculations
Krakow, August 3 – GridwiseTech, the vendor-independent expert in scalable solutions, has released a demo application for the financial sector, integrating a system that allows to distribute computation tasks onto multiple machines with a Web-portal for easy mobile access. The demo presents how to speed up sophisticated finance calculations, like forecasting portfolio Value, effectively, also by means of the smartphone interface. It is available at www.gridwisetech.com/demo. The solution presented by
Comments about openPR
OpenPR ist the nicest and most clearly laid out PR platform I have seen to this day. The press releases are displayed very nicely and clearly and without any unnecessary frills. The updates are fast and the finished release looks appealing and is clearly legible. Even with 16 years of experience one discovers new things from time to time. Congratulations!
Gabriele Ketterl, Director Marketing & PR, Menads