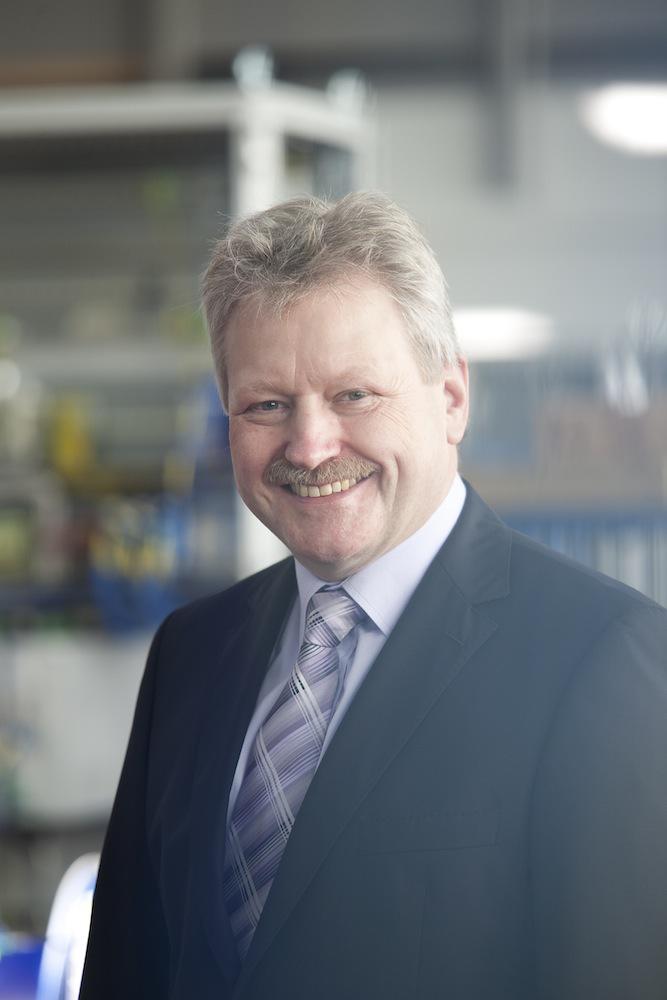 A quarter of a century at futronic: Wolfgang Lachmann. (Foto: futronic/Lisa Berger)

The 58 year old has been responsible for the technical management since 2004Tettnang, November 20, 2013 – Managing Director Wolfgang Lachmann joined futronic 25 years ago as Technical Manager. 2004 he took over the management of the control systems specialist in Tettnang together with Michael Preuß.Prior to embarking on his professional career, Wolfgang Lachmann took a degree in Electronics Engineering in the field of Communication Technology at Ravensburg-Weingarten University for Applied Sciences. Already as a student Lachmann, a native of Bad Waldsee, had offered engineering services. In the process he dealt with quite curious tasks: Thus, at the end of the 1970s, he developed for Escher Wyss the information technology part of a measurement device to measure the thickness of cigarette paper. Then he introduced the first Personal Computer ever to this enterprise, which was directly used at the factory for efficiency calculations of a water turbine – an absolute novelty that time.Affected by the Glass Virus Actually Lachmann could have moved on like that, being independent after the studies – if there would not have been an “irresistible offer“, Lachmann tells. 1980 the technicians of the glass manufacturer Oberland in Bad Wurzach looked for someone to push computer engineering. A friend from the Escher-Wyss-Projects recommended Lachmann. Lachmann got the invitation to visit the factory in Bad Wurzach, where he gathered some spectacular impressions of the production, and right then “was gripped by the Glass Virus“, Lachmann explains. In the developing division, where at that time a certain Bernt Küstner was responsible for the Electronics Department, he was in charge of technical computer applications and automation solutions in the production – and soon became the contact person for suppliers and external service providers. „At that time I came to know futronic“, Lachmann remembers.Lachmann pushes industrial automation 1986 Oberland bought the control systems specialist and sent Küstner to Tettnang to take over the management of futronic. Two years later Küstner took the young communication engineer to Tettnang as Head of the Technical Department. When Küstner retired in 2004 Wolfgang Lachmann took over the helm at futronic together with Michael Preuß. In this management duo Preuß is responsible for sales and distribution and Lachmann for the technical management. A personal milestone is, for example, the development of the FMT24S. The FMT – initiated by Küstner – was the first Control System for a Glass Production Machine with IP-Technology in the world. In the following years Lachmann promotes the expansion of industrial automation in a significant role, and thus also the product portfolio. With success – futronic expands, the number of employees increases. The move to a larger building complex in Bürgermoos industrial park in 2008 marks an important milestone in the company’s history.Keeping eyes on the wellbeing of the employees Today Lachmann is still technician through and through; he even can let go, “finally we have a really good staff.“ Together with his partner Preuß he always keeps in mind the company in its entirety and its success, the aim is clear: to secure the existence of futronic and thus secure jobs. The wellbeing of the employees and a good working atmosphere are especially important to him, Lachmann explains. Streamlined hierarchies and the gentle management of the duo may contribute to this atmosphere. The colleagues show their gratitude in loyalty – over decades in some instances.Wolfgang Lachmann, born in 1954, is married and has two grown-up children. Since about 20 years he has been a member of the church choir of Mariabrunn and as a cofounder of the Lions Club Tettnang is also involved in social areas. His personal Credo: “Face the daily changes, work on the resulting risks and seize the relevant opportunities, that’s what moves us ahead.”More information: www.futronic.deAbout futronic futronic GmbH is one of the world's top suppliers in the field of complex automation solutions for plant and equipment manufacturers in the glass production industry. The company has grown considerably in recent years: a team of 70 staff currently support around 1050 installations worldwide. Among the customers of its Industrial Automation division are numerous top-flight enterprises like Zeppelin Systems, Liebherr, KTW K. Weißhaupt and ZF Friedrichshafen. futronic, established in 1972, is a Jetter AG company. Managing Directors are Michael Preuß and Wolfgang Lachmann.futronic GmbH Michael Preuß Tolnauer Straße 3-4 88069 Tettnang Telefon +49 7542 5307-30 Mail michael.preuss@futronic.dekius kommunikation René Kius Mühlbruckstraße 5/1 88212 Ravensburg Telefon +49 171 1915263 Mail rene.kius@kius-kommunikation.de

06-08-2017 | Industry, Real Estate & Constr …
futronic GmbH
futronic website relaunched
New CI makes partnership with parent company Jetter AG more visible Tettnang, June 08, 2017 – The website of futronic GmbH has just been given a complete facelift. The relaunched site puts the emphasis firmly on content – case studies and other stories are used to communicate a comprehensive picture of the control system specialist’s competencies and activities. The concept and design are based on a new corporate identity, developed in
08-26-2013 | Industry, Real Estate & Constr …
futronic GmbH
futronic's steady growth trajectory continues
Control system specialist tops last year's record result and creates new jobs through expansion Tettnang, July 4, 2013 – In the fiscal year just ended, futronic GmbH generated sales revenues of around 10.2 million euros, beating its already excellent figure for the previous year by 1.6 million. This represents an impressive increase of around 19 percent. futronic got off to a successful start with its new Domestic Glass division and the
07-17-2012 | Industry, Real Estate & Constr …
futronic GmbH
futronic presents best result in company history
Thanks to very good order situation the company stays on course for growth and is looking for qualified specialists Tettnang, July 13, 2012 – In the past financial year futronic GmbH achieved a sales of 8,6 million Euro. Thus the company could increase sales by 1,4 million Euro in comparison with the previous year. This corresponds to a full increase in revenue of about 19 per cent. The share of
06-28-2012 | Industry, Real Estate & Constr …
futronic GmbH
futronic turns 40
More than 250 guests celebrate the firm's 40th anniversary on Lake Constance Tettnang, June 28, 2012 – Last Friday, futronic GmbH celebrated its 40th anniversary with a special gala on the MS Graf Zeppelin. Around 250 guests were present on board to convey their best wishes and join in the festivities. Customers, shareholders, business associates and friends from all over the world turned up to pay tribute. Among those offering their