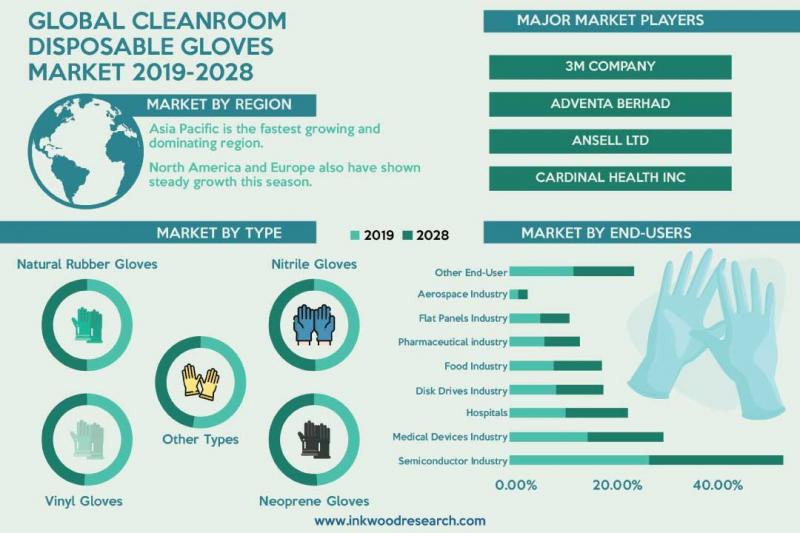 According to a new market research report published by Inkwood Research, the Global Cleanroom Disposable Gloves Market is projected to evolve at a CAGR of 8.15% in terms of revenue, and 7.47% in terms of volume during the forecasting years of 2019-2028."Browse 85 market Data Tables and 77 Figures spread over 223 Pages, along with an in-depth TOC on Global Cleanroom Disposable Gloves Market Forecast 2019-2028."REQUEST FREE SAMPLE LINK - https://www.inkwoodresearch.com/reports/cleanroom-disposable-gloves-market/#request-free-sampleCleanroom disposable gloves are mainly utilized pharmaceutical, semiconductors, and electronics industries as a protection tool for the cleanroom personnel, and to prevent the contamination of the final manufactured product. These gloves are manufactured from natural rubber or latex, vinyl, neoprene, and nitrile. Natural rubber cleanroom disposable gloves are the most conventional type of gloves widely used in the market as they are user-friendly. Development of the Consumer Sector Augments Market GrowthIn the manufacturing sectors of pharmaceuticals, healthcare, and life sciences, installation and regular maintenance of cleanrooms are essential for maintaining a clean environment. Hence, the growth of the consumer sectors is supplemented by the increasing usage of all disposable consumables, including disposable gloves by the cleanroom personnel. A major concern of the pharmaceutical industries is to avoid the contamination of biological activities, which is possible by frequently changing the gloves. Healthcare professionals use medical gloves for surgeries and other related activities, which can be contagious and harmful. Other industries, such as electronics and semiconductors, are also fueling the market growth.VIEW TABLE OF CONTENT LINK - https://www.inkwoodresearch.com/reports/cleanroom-disposable-gloves-market/#table-of-contentsNatural Rubber Gloves Garners the Largest Revenue Share Natural rubber is made of polymers of an organic compound named isoprene. Natural rubber is majorly used in the production of disposable gloves in medical and non-medical industries. The main attributes of natural rubber, such as low cost of raw materials, eco-friendly compositions, and convenient production processes, enhance the latex cleanroom disposable gloves market. Moreover, handling of objects becomes much easier during critical procedures due to their flexibility and tear resistance properties. High-risk latex gloves are primarily used in automotive industries and chemical laboratories involving hazardous chemicals and risk of contamination, as they provide protection due to their thickness and less reactivity. Thus, the growth of natural rubber gloves is anticipated to be influenced by largescale use of cleanroom disposable gloves by different industries. REQUEST CUSTOMIZATION LINK - https://www.inkwoodresearch.com/request-for-custom-report/Asia Pacific is projected to record the Highest CAGR on Account of Volume and Revenue The Asia Pacific region is estimated to be the fastest-growing market both in terms of revenue and volume during the forecast period. The Asia Pacific is one of the largest consumers of the cleanroom disposable gloves, owing to a rise in the biotechnology and pharmaceutical industries, particularly in India, Japan, and China. This growth is amplified by the expanding need for cleanroom technology in various industries. The Asia Pacific has surpassed other regions in increasing cleanroom spaces due to its dominance in the semiconductor industry. China, Taiwan, and South Korea are the leading investors in semiconductor plants, which is boosting the market growth.The competitive rivalry is intense in the global cleanroom disposable gloves market due to low product differentiation. New players can easily enter the market due to low exit barriers. Furthermore, there are many regional and small-sized suppliers of cleanroom disposable gloves, which resort to discounted pricing and aim to gain market share. The leading companies actively operating in the global market are 3M Company, Semperit AG Holding, B. Braun Melsungen AG, Johnson & Johnson, Kossan Rubber Industries Bhd, and others.BUY NOW- https://www.inkwoodresearch.com/reports/cleanroom-disposable-gloves-market/Related Report:GLOBAL CLEANROOM TECHNOLOGY MARKET https://inkwoodresearch.com/reports/global-cleanroom-technology-market/GLOBAL DISPOSABLE MEDICAL GLOVES MARKET https://inkwoodresearch.com/reports/disposable-medical-gloves-market/GLOBAL WATERPROOF BREATHABLE TEXTILES MARKET https://inkwoodresearch.com/reports/global-waterproof-breathable-textiles-market/Inkwood Research 169, Harrison Avenue Boston, MA 02111 Tel: 1-(857)293-0150 Email: sales@inkwoodresearch.com Website: www.inkwoodresearch.comWe at Inkwood research provide you with not just consulting services but also with syndicated and customized research reports which help advance your business further.

06-19-2019 | Business, Economy, Finances, B …
P&S Intelligence
What's driving the Europe Cleanroom Technology Market Trends? | Key Players are …
The European cleanroom technology market is forecasted to generate $1,701.8 million revenue by 2023. The market is mainly driven by increasing number of conferences, seminars, and events for cleanroom technology, growing infectious diseases, and increasing healthcare expenditure in the region. Download report sample at: https://www.psmarketresearch.com/market-analysis/europe-cleanroom-technology-market/report-sample The different types of products available in the European cleanroom technology market are cleanroom consumables and equipment. The market for cleanroom consumables is expected to observe faster
06-13-2019 | Health & Medicine
SMi Group
SMi invites cleanroom experts to join Pharma Cleanroom Technology Conference
SMi Reports: Updated brochure released with the full two-day agenda for the inaugural Pharmaceutical Cleanroom Technology conference this October in London, UK Since the release of the agenda for the Inaugural Pharmaceutical Cleanroom Technology Europe Conference, taking place on 9th and 10th October in London, SMi are delighted to share the updated brochure, containing additional speakers and a full two-day agenda. Through a series of presentations, attendees with gain insight
05-17-2019 | Health & Medicine
SMi Group
Cleanroom industry experts join the Pharmaceutical Cleanroom Technology Conferen …
SMi Reports: Leading industry experts will be speaking and attending the inaugural Pharmaceutical Cleanroom Technology conference in London, UK. Pharmaceutical and biologics product development and manufacturing processes carry their progressive complexities, which consequently affect cleanliness requirements and outline of facilities. Compliance with the standards for product approval is very important and as a result manufacturing companies in various industries are dependent on cleanroom technology. By 2025, the global cleanroom technology market is
09-14-2018 | Business, Economy, Finances, B …
Research Cosmos
Global Cleanroom Air Filter Market
Global Cleanroom Air Filter Market Overview: Global cleanroom air filter market forecast identifies that the increasing application of cleanroom air filters in nanotechnology will be one of the primary drivers for the market growth till 2025. Nanotechnology involves the creation and use of materials, devices, and systems by employing matter on a scale of 100 nanometers. The manufacture of these minuscule products must be handled without any human intervention to prevent
04-19-2018 | Health & Medicine
TMR Research
Cleanroom Consumables Market Perceptible over 2025
Global Cleanroom Consumables Market: Snapshot The global market for cleanroom consumables has expanded rapidly in the past few years. A number of factors have acted in the favor of the market, with the steady expansion of key end-use sectors at the core of the healthy growth exhibited by the market in the recent years. The vast rise in set of applications of nanotechnology, for instance, in areas such as electronics, medicine,
10-30-2017 | Health & Medicine
Persistence Market Research
Cleanroom Technology Market Cleanroom Technology Market 2014-2020
The global cleanroom technology market was valued at USD 3,156.0 million in 2014 and is expected to grow at a CAGR of 5.2% from 2014 to 2020 to reach an estimated value of USD 4,290.1 million by 2020. Cleanroom refers to an enclosed space constructed in such a manner so as to control the concentration of airborne particles such as particulates (dust, hair), chemicals (oil, grease), microorganisms (bacteria, fungus), and radiations.
Comments about openPR
Your portal is fast, simple, and easy to use. Others may have more functions but they also demand more editing time, you have to preformat the text in order to achieve a good result etc. I think openPR is really fantastic!
Andreas Knepper, wallmedien AG