Growing Prevalence of Chronic Diseases is Augmenting the Global Biochips Market Growth at 13.41% 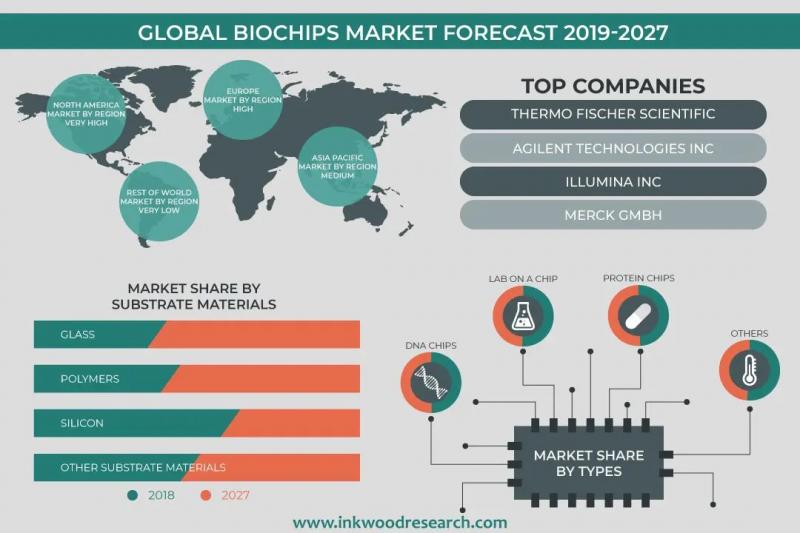 According to a new market research report published by Inkwood Research, the Global Biochips Market is projected to evolve at a CAGR of 13.41% during the forecasting years of 2019-2028."Browse 92 Market Data Tables and 71 Figures spread over 325 Pages, along with an in-depth TOC on Global Biochips Market Forecast 2019-2028."REQUEST FREE SAMPLE LINK- https://www.inkwoodresearch.com/reports/biochips-market/#request-free-sampleBiochips are microreactors that may contain millions of individual sensors and can perform hundreds or thousands of simultaneous biochemical reactions. A biochip is a wonderful outcome of modern-day research with a perfect amalgamation of microchip and biotechnology. Biochips are used for various applications, including research in biotechnology, such as proteomics and genomics, molecular diagnostics, and drug screening and development. Biochips can also provide an analysis of organic molecules associated with living organisms. Performing hundreds of biological reactions in a few seconds, like decoding genes, is the main function of biochips.Increasing Occurrences of Chronic Diseases Propels Market GrowthThere is a prevalence of chronic diseases such as diabetes, heart disease, cancer, stroke, and arthritis worldwide. Cardiovascular diseases account for the highest number of deaths caused by chronic diseases, i.e., 17.5 million people annually. Chronic diseases are the leading cause of death and disability in the United States. According to WHO, the prevalence of chronic diseases will rise by 57% by 2020, and 60% of this burden will occur in emerging markets. A rise in demand for healthcare systems due to chronic diseases is a major concern, and accurate and timely clinical decision-making is critical. Biochips have the potential to test speed and cost-efficiency owing to miniaturization. Developing new lab-on-a chip-based POC systems is growing into an emerging area. LOC-based wearable systems for continuous glucose monitoring can prove to be an effective tool for patients with type 2 diabetes. VIEW TABLE OF CONTENT LINK- https://www.inkwoodresearch.com/reports/biochips-market/#table-of-contentsBiotechnology and Pharmaceutical Companies Records the Highest CAGR Biochips are mainly used in biotechnology researches in areas like proteomics, genomics, molecular diagnostics, and drug development, and screening. Biotechnology companies use biochips for various purposes. For instance, DNA microarrays are used to measure the expression levels of a large number of genes simultaneously. The surge in research and development funding in biotechnology and pharmaceutical companies is expected to increase the demand for biochips. For example, the UK companies announced a significant investment in biotechnology projects for reducing the need for fossil resources. Teva announced its partnership with Microchips Biotech and an investment of $35 million in the US firm towards the drug discovery application. REQUEST CUSTOMIZATION LINK- https://www.inkwoodresearch.com/request-for-custom-report/The Asia Pacific Region accounted for the Largest Market Share in 2019 The Asia Pacific market captured the largest revenue in 2019, owing to an upsurge in demand for drug discovery, a rise in the use of personalized medicines, and an increase in demand for high-speed diagnostics. Further, a rise in the use of biochips has led to rapid developments in various fields of medical sciences. In addition, innovation, ongoing research, and development of biochips and genomic are driving the growth of the market.The biochips market is primarily dominated by well-established companies, though many new players control a significant share of the market. There is a sustainable competitive advantage in the market. The similarity in products offered by leading companies market leads to intense competition. The prominent companies trying to consolidate their position in the global market through continuous innovations are F. Hoffmann-La Roche Ltd, Abbott Laboratories, Merck KGaA, Agilent Technologies, Inc, Bio-Rad Laboratories Inc, and others.BUY NOW- https://www.inkwoodresearch.com/reports/biochips-market/Related Report:GLOBAL INFERTILITY TESTING AND TREATMENT MARKET https://inkwoodresearch.com/reports/infertility-testing-and-treatment-market/GLOBAL GENETIC TESTING MARKET https://inkwoodresearch.com/reports/genetic-testing-market/GLOBAL CELL FREE DNA (CFDNA) TESTING MARKET https://inkwoodresearch.com/reports/cell-free-dna-cfdna-testing-market/Inkwood Research 169, Harrison Avenue Boston, MA 02111 Tel: 1-(857)293-0150 Email: sales@inkwoodresearch.com Website: www.inkwoodresearch.comWe at Inkwood research provide you with not just consulting services but also with syndicated and customized research reports which help advance your business further.

You can edit or delete your press release Growing Prevalence of Chronic Diseases is Augmenting the Global Biochips Market Growth at 13.41% here