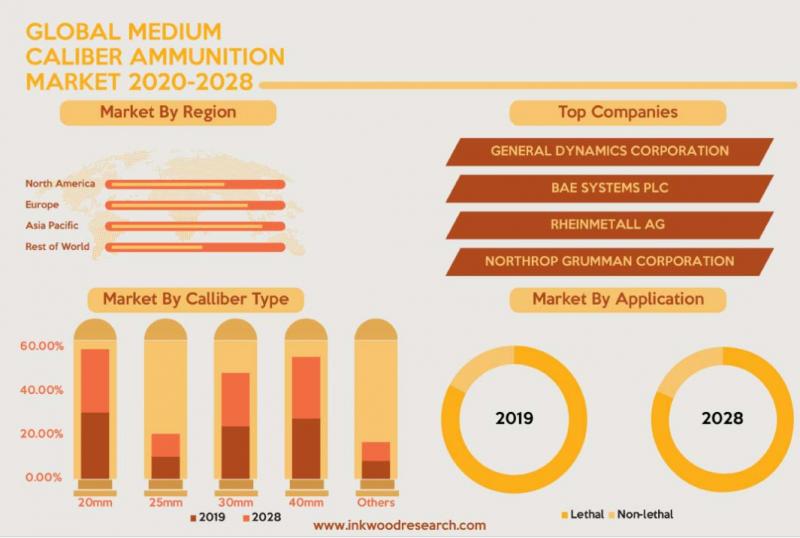 According to the new market research report published by Inkwood Research, the Global Medium Caliber Ammunition Market is predicted to project a CAGR of 1.62% during the forecasting years of 2020-2028. "Browse 29 Market Data Tables and 38 Figures spread over 188 Pages, along with an in-depth TOC on the Global Medium Caliber Ammunition Market Forecast 2020-2028."REQUEST CUSTOMIZATION LINK - https://www.inkwoodresearch.com/request-for-custom-report/REQUEST FREE SAMPLE LINK - https://www.inkwoodresearch.com/reports/medium-caliber-ammunition-market/#request-free-sampleVIEW TABLE OF CONTENT LINK - https://www.inkwoodresearch.com/reports/medium-caliber-ammunition-market/#table-of-contentsBUY NOW- https://www.inkwoodresearch.com/reports/medium-caliber-ammunition-market/ Ammunition is an instrumental and indispensable part of defense forces. Several nations have adopted a vast range of ammunitions for protection and sustenance against conflicts, terrorist activities, and wars. They are also utilized by civilians for shooting and hunting purposes. Various types of ammunitions include medium-caliber cartridges, large-scale cartridges, and small-caliber cartridges. Medium-caliber ammunitions are used within the size range of 20mm to 57mm. The ammunition comes in accordance with different specifications like target practice tracer, high explosive incendiary, etc.Defense Modernization Programs Augments Market Growth Several countries have modernized their defense programs in order to acquire defense-related products and services for emboldening their economic stance. The ammunition industry is benefitting from increasing defense budgets across the globe. This leads to rising demands by military end-users, which influences the medium-caliber ammunition industry in a considerable manner. This is especially seen in the Asia Pacific region, where many emerging economies are undertaking defense modernization programs as a result of growing military expenditure. Thus, the adoption of modern defense programs becomes one of the major factors that propel market growth. To know more about this report, request a free sample copy.Non-Lethal Category Records the highest CAGR in the Application Segment The non-lethal applications of medium caliber ammunition are majorly utilized for riot-control by police and other civil law units. The most common type include Blunt Impact Projectiles (BIPs) that come in three types, bean bag rounds, sponge grenade, and airfoil rounds. The growing riots and protests are escalating the use of non-lethal medium caliber ammunition. There have been instances, where the police and similar agencies with regard to law enforcement, utilized medium caliber ammunition during riots. In 2019, the Hong Kong police were said to have used riot-control weapons for the first time in the country's history. Several weapons and ammunition manufacturers like Rheinmetall AG and Non-Lethal Technologies Inc supply 40mm ammunition.Asia Pacific records the highest CAGR as well as harbors largest market share The Asia Pacific region has the presence of major countries like Japan, South Korea, India, and China that contribute to market growth in a significant manner. Of these, India is estimated to record the fastest growth. The rising military expenditure is the dominant factor stimulating the growth of the market. The region is also evaluated to have wide scope for ammunition manufacturers in the region, with regard to medium-caliber ammunition manufacture. Furthermore, there are immense market growth opportunities for new entrants, given the boundary disputes amongst the countries of the region. With respect to the competitive nature of the market, there is a prevalence of intense competition in the market as several vendors compete in terms of reliability and technological innovations. The new entrants of the market need to sustain considerable capital cost for manufacturing medium caliber ammunition. Some of the leading companies in the market are Mesko SA, Nammo AS, and Bae Systems Plc.Related Reports: GLOBAL BALLISTIC PROTECTIVE EQUIPMENT MARKET GLOBAL DIRECTED ENERGY WEAPONS MARKET GLOBAL SEMICONDUCTOR IN AEROSPACE & MILITARY MARKETInkwood Research 169, Harrison Avenue Boston, MA 02111 Tel: 1-(857)293-0150 Email: sales@inkwoodresearch.com Website: www.inkwoodresearch.comWe at Inkwood research provide you with not just consulting services but also with syndicated and customized research reports which help advance your business further.