Press release from: We Market Research 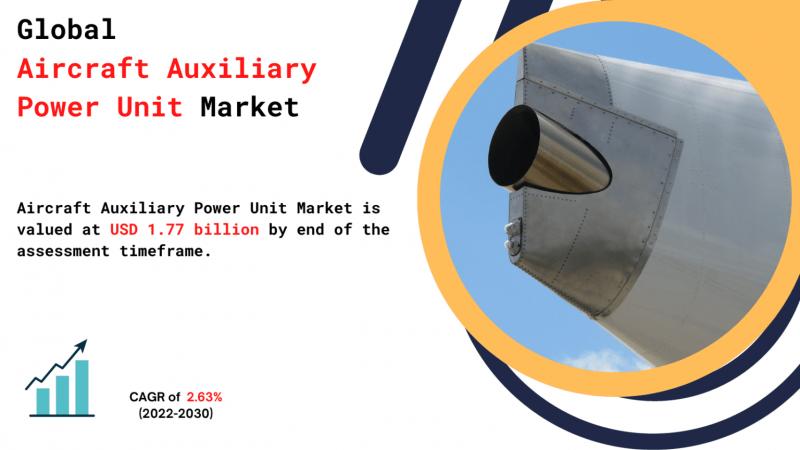 The aircraft auxiliary power unit market is valued at USD 669.47 million in 2022 and is projected to reach a value of USD 1002.76 million in 2030 expanding at a CAGR of 5.18% over the forecast period of 2022-2030. An auxiliary power unit is defined as an electric power source of aircraft that usually provides energy for the functioning of the aircraft system. The key function of an aircraft auxiliary power unit is to give the ability in order to turn over the aircraft's engine.The traditional auxiliary power unit generally generates loud noises that results in an increase in the noise pollution. In order to reduce the noise pollution, the key manufacturers have increased their focus on the development of low noise auxiliary power units.Also, the advanced aircraft auxiliary power units offer high performance, low fuel consumption, and reduced noises among others. Additionally, the moving trend towards the adoption of more electric aircraft has also boosted the market growth.Key Market Trends Every market has its growth determinant and challenges. One of the major factor that has fuelled the market growth is the rising demand for the fuel-efficient auxiliary power unit.Additionally, the rising development of more electric aircraft in order to gain a high economy at a reduced fuel consumption has also boosted the market growth over the forecast period.Also, the rising number of military aircraft is one of the key drivers that has supported the aircraft auxiliary power unit (APU) market growth over the forecast period. this is because in recent times, Asia has been the largest buyer of fighter aircraft because of the countries such as Japan, Vietnam, and the Philippines that are expanding their aerial fleet in response to the moves by China to assert territorial claims in the South China Sea.On the flip side, the development of fuel cells for unmanned aerial vehicles (UAVs) is one of the challenges that has been hampering the military aircraft APU market growth over the forecast period. Using APU on board aircraft releases large amounts of heat and carbon, which has led to the development of alternative powering technologies such as, fuel cells.Request a Free Sample Copy: https://wemarketresearch.com/sample-request/aircraft-auxiliary-power-unit-market/327/ Segmental analysis of the MarketBased on Aircraft Type • Fixed-wing • Rotary-wing • UAVs The fixed wing segment has dominated the market growth over the forecast period. This is because of the rising delivery of fixed-winged commercial aircraft.Based on Platform • Commercial • Military The military segment has dominated the market growth over the forecast period. This is because of the rising use of aircrafts in the military sector. North America is anticipated to amplify at a considerable CAGR.The aircraft auxiliary power unit market is segmented into 5 main regions namely, North America, Europe, Asia Pacific, Latin America, and Middle east and Africa. Among these, North America is anticipated to dominate the market growth over the forecast period. This is because of the presence of many aircraft manufacturers and aircraft auxiliary power unit manufacturers. Also, the U.S., has spent a large amount on the adoption of advanced solutions for military application.Competitive Landscape Some of the prominent companies operating in the market are • Aegis Power Systems Inc. • Aerosila • Honeywell International Inc. • Liebherr International AG • Northstar Aerospace • PBS Group AS • Raytheon Technologies Corp. • Safran SABuy This Report: https://wemarketresearch.com/purchase/aircraft-auxiliary-power-unit-market/327/?license=single Frequently Asked Questions • What is the growth rate of the aircraft auxiliary power unit market? • What are the primary growth determinants of the market? • Which are the major regions constituting the geographical landscape of the market? • Which are the prominent companies operating in the market?Contact Us: We Market Research Phone: +1(650)-666-4592 Email: sales@wemarketresearch.com Web: https://wemarketresearch.com/About We Market Research: WE MARKET RESEARCH is an established market analytics and research firm with a domain experience sprawling across different industries. We have been working on multi-county market studies right from our inception. Over the time, from our existence, we have gained laurels for our deep rooted market studies and insightful analysis of different markets. Our strategic market analysis and capability to comprehend deep cultural, conceptual and social aspects of various tangled markets has helped us make a mark for ourselves in the industry. WE MARKET RESEARCH is a frontrunner in helping numerous companies; both regional and international to successfully achieve their business goals based on our in-depth market analysis. Moreover, we are also capable of devising market strategies that ensure guaranteed customer bases for our clients.

More Releases from We Market Research

09-05-2022 | Logistics & Transport
skyquestt
Global Aircraft Line Maintenance Market By Aircraft Type: Narrow Body Aircraft ( …
According to the latest research by SkyQuest Technology, the Global Aircraft Line Maintenance Market was valued at USD 18.38 billion in 2021, and it is expected to reach USD 28.53 billion by 2028, with a CAGR of 5.80% during the forecast period of 2022 - 2028. The research provides up-to-date Aircraft Line Maintenance market analysis of the current market landscape, latest trends, drivers, and overall market environment. Get full report
04-20-2022 | Business, Economy, Finances, B …
allied market research
Aircraft Cables Market End User (Commercial Aircraft, Private Aircraft, Defense …
Aircraft cable is a type of cable, which mainly finds application in the aircraft industry. The high strength and versatile aircraft cable can also be used for various pushing and pulling applications that includes sheaves, pulleys, and winches among others. The size of the aircraft cable is between 0.047 inches to 0.375 inches, and constructed in various strand namely 1X7 strand, 1X19 strand, 7X7 strand, and 7X19 strand. Get Sample
10-13-2021 | Logistics & Transport
allied market research
Commercial Avionics Systems Market Aircraft Type (Narrow-body aircraft, Wide-bod …
Commercial Avionics Systems Market Report, published by Allied Market Research, states that the commercial avionics systems market was valued at $16 billion in 2014 and is projected to reach $26 billion by 2022, growing at a CAGR of 7.1% from 2016 to 2022. Surge in the number of aircraft deliveries, increasing demand for real-time data, economic growth in emerging countries, and increasing demand for in-flight entertainment (IFE) services are expected to
10-11-2021 | Business, Economy, Finances, B …
Allie Market Research
Aircraft Glareshield Lighting Market Aircraft Type (Narrow Body Aircraft, Wide B …
Aircraft Glareshield Lighting Market Outlook - 2027 Glareshield lighting is used for designing the inner aircraft cabin. The goal of aircraft glareshield lighting in an aircraft is to make the instruments and controls easy to read, while preserving the pilot’s night vision. Significant number of aircraft deliveries is expected to be a main factor boosting the growth of the global aircraft glareshield lighting market during the forecast period. Furthermore, the replacement of
04-04-2019 | Advertising, Media Consulting, …
HTF Market Intelligence Consulting Pvt. Ltd.
Light Aircraft Market Is Booming| Diamond Aircraft, Piper Aircraft, TECNAM
A latest survey on Global Light Aircraft Market is conducted covering various organizations of the industry from different geographies to come up with 100+ page report. The study is a perfect mix of qualitative and quantitative information highlighting key market developments, challenges that industry and competition is facing along with gap analysis and new opportunity available and may trend in Light Aircraft market. The report bridges the historical data from
01-22-2019 | Business, Economy, Finances, B …
Light Aircraft
Global Light Aircraft Market Report 2019 Companies included Cirrus Aircraft, Ele …
We have recently published 7th edition of market research report on Light Aircraft. For inquiry email us at: sales@marketreportscompany.com Report includes data about consumer perspective, comprehensive analysis, statistics, market share, company performances (Stocks), historical analysis 2012 to 2017, market forecast till 2026 in terms of volume, revenue, YOY growth rate, and CAGR. The report also provides detailed segmentation on the basis of product type, applications and regional segmentation. The regional segment
Comments about openPR
Your portal is fast, simple, and easy to use. Others may have more functions but they also demand more editing time, you have to preformat the text in order to achieve a good result etc. I think openPR is really fantastic!
Andreas Knepper, wallmedien AG