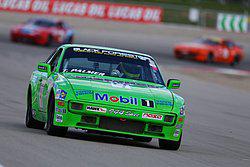 TOOELE, UT (13 SEPTEMBER 2013)—19-year-old Tyler Palmer capped off a nearly perfect weekend last Saturday as he took his third consecutive national title in the highly competitive Porsche 944 Spec class at the 8th Annual NASA Championships presented by Toyo Tire from Miller Motorsports Park. The triumph in his No. 4 Black Forest/Discount Tire/Mobil 1/Hawk Performance/Bilstein Porsche is the crowning achievement of an incredibly successful 2013 racing season, in which the young driver has proved his talent in a variety of cars and racing series.Palmer’s defense of his national championship started off with a bang, as all NASA Championships competitors were invited to participate in a karting tournament to kick off the race weekend. 175 racers competed against each other in equally prepared karts to determine whose pure driving ability—not engine power or car setup—reigned supreme. Palmer advanced through the heats to qualify on pole for the final round, before the field was inverted prior to the green flag. Starting from last on the inverted grid, Palmer advanced his way forward in the short final race, to claim victory over all of the NASA Championships competitors and bragging rights—a harbinger to the impressive victories he would capture later in the weekend.His speed unmatched in qualifying for the Porsche 944 Spec races, Palmer started each qualifying heat from pole position, finishing second in Thursday’s race, and winning Friday’s round. His results in the qualifying races allowed Palmer to start from the front in the final event on Saturday, but the savvy driver knew he couldn’t rest on the laurels of his strong finishes in the qualifiers. “The car was great from the start of the event, but we knew everyone else would be getting faster, so we made some minor adjustments over the course of the weekend to get even better,” explained Palmer.The start of the final race did not go to plan, as Palmer was shuffled back to third position, but the talented young driver calmly worked his way back through the field to take the lead once more. He steadily built a two-second lead over the second place car, until not one, but two full-course cautions brought the rest of the field back to Palmer’s bumper. “I knew I had to get a great restart each time, and thankfully I was able to do just that and bring it home to the finish line for my third consecutive national title,” said the smiling Oceanside, CA native. “After finishing the race, I knew I’d accomplished something special, and I was elated with what my team and I have been able to do over the past three years.”Palmer has no definite plans for next season, but is hoping that his consistent quickness in big events like the NASA Championships presented by Toyo Tires will impress professional racing teams that are looking for drivers. With the kind of speed he’s shown in the 2013 season, it won’t be long before Palmer joins the ranks of the country’s most competitive sportscar racers. Learn more about Tyler Palmer at www.TylerPalmerRacing.com and find him on Facebook at facebook.com/TylerPalmerRacing.Tyler Palmer is one of the top up-and-coming racing drivers in the country. At the age of 19, his achievements include race wins in a diverse variety of cars, and three national championships.Tyler Palmer Racing 8057 Raytheon Road #6 San Diego, CA 92111Press Contact: Peter Minnig peter.minnig@gmail.com

04-19-2021 | Tourism, Cars, Traffic
AMA Research & Media LLP
Supercar Market to see Booming Business Sentiments | Porsche, Ferrari, McLaren
A new business intelligence report released by Advance Market Analytics with title Global Supercar Market Insights, forecast to 2025.This report provides a detailed overview of key factors in the Global Supercar Market and factors such as driver, restraint, past and current trends, regulatory scenarios and technology development. A thorough analysis of these factors has been conducted to determine future growth prospects in the global market. Major Key Players in This
07-23-2018 | Advertising, Media Consulting, …
MarketResearchReports.biz
Supercar Market: Porsche, Bentley, Ferrari, AstonMartin, Lamborghini
MarketResearchReports.Biz adds “Global Supercar Market Share, Size, Trends and Forecast Market Research Report” reports to its database. This report provides a strategic analysis of the Supercar market and the growth estimates for the forecasted period. This report studies the global Supercar market status and forecast, categorizes the global Supercar market size (value & volume) by manufacturers, type, application, and region. This report focuses on the top manufacturers in North America, Europe,
01-23-2018 | Tourism, Cars, Traffic
business news
Global Hyper Cars Market 2018 - Bugatti, Ferrari, Porsche, Maserati
The statistical surveying information incorporated into the Hyper Cars report is the aftereffect of significant essential and optional research exercises. The report fragments the global Hyper Cars market based on makers, item compose, applications, and regions. In this report, each fragment is contemplated completely and measurements are introduced in detail. The report offers an exact outline of the global Hyper Cars advertise covering key factors, for example, drivers and restrictions
09-12-2017 | Business, Economy, Finances, B …
market research 2017
Automotive Supercharger Market Demand 2017-2022 Daimler, Porsche, Ford, Ferrari
Automotive Supercharger Market Research Report A market study based on the " Automotive Supercharger Market " across the globe, recently added to the repository of Market Research, is titled ‘Global Automotive Supercharger Market 2017’. The research report analyses the historical as well as present performance of the worldwide Automotive Supercharger industry, and makes predictions on the future status of Automotive Supercharger market on the basis of this analysis. Request For Sample
06-20-2012 | Tourism, Cars, Traffic
Porsche of Ocala
The 2013 Porsche Boxster Arrives at Porsche of Ocala
Ocala, FL – June 19, 2012 – Porsche of Ocala today announced that the new 2013 Porsche Boxster models have arrived in their Ocala showroom. The third-generation of the highly regarded Porsche sports car launches on June 28. Never before in the history of the Porsche Boxster has a change of generation been so comprehensive. The new Boxster weighs up to 77 pounds less than the previous generation while riding on
02-07-2012 | Tourism, Cars, Traffic
Porsche of Ocala
The New, Seventh-Generation Porsche 911 Debuts at Porsche of Ocala
Ocala, FL –February 4, 2012–Porsche of Ocala today announced that the new Porsche 911 Carrera and Carrera S models have arrived in their Ocala showroom. The latest generation of the iconic Porsche 911 goes on sale Feb. 4. Following its introduction last fall, automotive media world-wide have designated the latest 911 as the best iteration of Ferdinand Porsche’s sports car vision yet. It is destined to remain every bit the icon
Comments about openPR
We publish our press releases on openPR.de because we like people who are "open" - just like us.
Frank Obels, CEO, INCONET - Informationssysteme, Communication und Netzwerkberatung GmbH