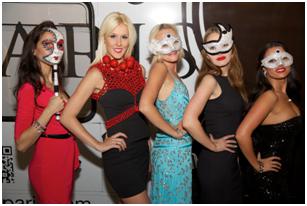 An incredible time was had at this year’s International Jewellery London event in Earls Court. Marking its final voyage in the enormous convention hall of Earl’s Court 2, thousands of industry big shots took the opportunity to spot talent, design and meet their contemporaries. Tresor Paris set out to make their stand a little different, decked out like a Parisian street, the structure came complete with Crêpe stand, chocolate fountain and cocktail bar. Amongst the cobblestone streets rested several French boutique façades, which exhibited the new collections. Over 500 new designs were on display to the visitors over the four days, the most popular of which were Neptune, Orion, and the Ara 18 carat silver collection all received an enthusiastic thumbs-up from the trade and visitors. 7 trade packages from Tresor Paris were available for traders at the show, all of which were warmly received. Amongst Tresor’s exclusive guests casting their eyes over the magnificent array of contemporary and classic design were Big Brother’s Gina Rio and boy band Times Red, both of whom found the new collection inspiring! A bespoke piece created by Tresor Paris for PPQ named Amour Rouge, and 1920s inspired Gloriole featured on a range of catwalks throughout the show, and even received welcoming applause on the runway! Creative director Lillian Lousky said of the show, “It was a delight to hear all the positive responses to our new collection, and to meet like-minded industry members.” This was the last and 57th year that the IJL was held at the Earl’s Court 2 venue, and will be moving to its new home in Olympia. The IJL remains one of the UK’s most prestigious jewellery shows, and it is always exciting to have the opportunity to be involved.Tresor Paris Jewellery happens to work simultaneously for a wearer. It acts as a style accessory and is beneficial for a wearer’s health as well. You must be thinking what else can attract a wearer close to it. It is its attractive rate that combines with the luxurious look of the trinkets to bring out a fantastic thing.TRESOR PARIS 7 Greville Street Hatton Garden City:London State:East England ZIP Code:EC1N 8PQ Country:United KingdomFor more information, images or samples please contact: Nadine Doran-Holder|Marketing Executive 020 7427 8300 PR@tresorparis.com Website:http://press.tresorparis.com

09-17-2013 | Fashion, Lifestyle, Trends
Tresor Paris
Tresor Paris and Fyodor Golan at London Fashion Week
Tresor Paris, a UK Jewellery Award winner has once again collaborated with Fyodor Golan to help put the finishing touches to their SS14 collection ‘Electric Children’. A grey cloudy morning in Central London, splashes of intense colour could be seen high above street level in an enormous minimal function hall, with floor to ceiling windows sweeping the skyline. 280 High Holborn hosted the buzzing fashion event, which fired the starting gun
09-02-2013 | Fashion, Lifestyle, Trends
Tresor Paris
Tresor Paris’s “Nouvelle Collection” Launch Party
It’s a balmy Thursday night in central London, Bond Street is filled with tourists and commuters, in the distance one can see the Tresor Paris bus approaching, as it nears its destination it glistens in the early evening sunlight and finally arrives at the renowned Westbury Hotel, Mayfair. The event?The grand launch of the Tresor Paris’s“Nouvelle Collection”. Entering this fine hotel the guests, 325 of them, have to pass a massive
09-08-2011 | Fashion, Lifestyle, Trends
Tresor Paris
Tresor Paris Launches The ‘Les Couleurs’ Collection
With attention turning towards ‘2012’, Tresor Paris has produced the Les Couleurs collection with warmth and friendship in mind. Inspired by 2012, each colourful crystal bracelet represents a ring from the iconic friendship flag. The orange Lever bracelet –is made of 9 handpicked bright orange crystals with 2 magnetite stones. Just as appealing, the Soleil bracelet has a bright warm feel just like the name suggests - made up of 9 yellow
09-08-2011 | Fashion, Lifestyle, Trends
Tresor Paris
Tresor Paris launches 2012 Collections & ‘The Bus’ at IJL
Fashion Jewellery brand Tresor Paris will have its debut showing at the IJL exhibition at Earl Count 2 this September. Since the brands launch, the bracelets have been seen worn by stars from the world of film, cinema, sport and entertainment including JLS, The Saturdays, Alexandra Burke, Richard Blackwood and Amy Childs to name a few. It is the must have accessary. Tresor Paris will have its presence felt at the IJL