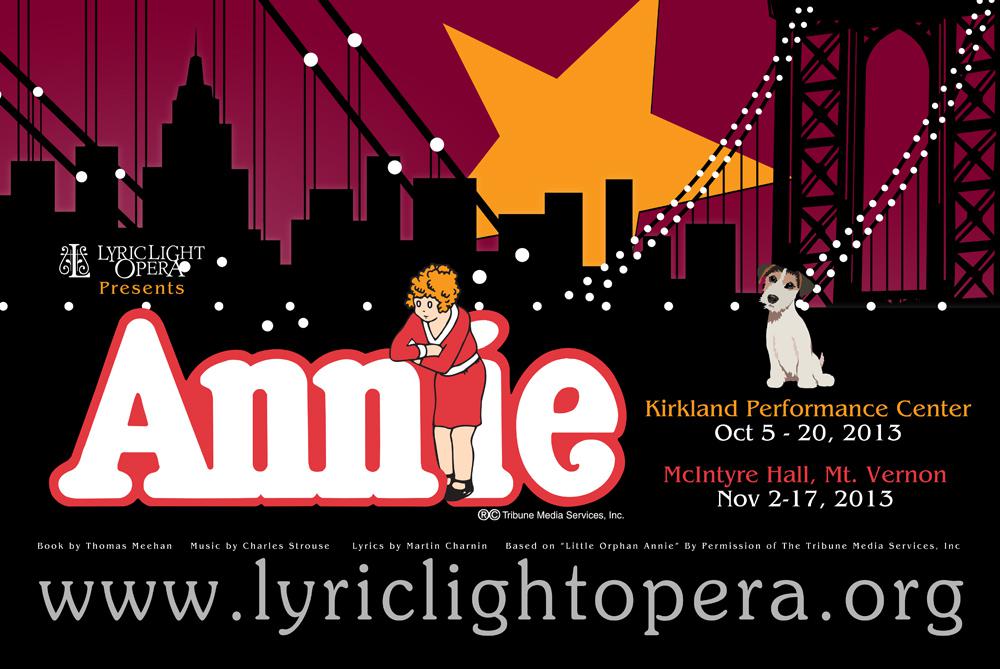 Leapin' Lizards! The popular comic strip heroine takes center stage in one of the world's best-loved musicals. With equal measures of pluck and positivity, little orphan ANNIE charms everyone's hearts, despite a next-to-nothing start in 1930s New York City. She is determined to find her parents, who abandoned her years ago on the doorstep of a New York City Orphanage run by the cruel, embittered Miss Hannigan.With the help of the other girls in the Orphanage, ANNIE escapes to the wondrous and magical world of NYC. In adventure after fun-filled adventure, ANNIE foils Miss Hannigan's evil machinations and befriends President Franklin Delano Roosevelt. She finds a new home and family in billionaire Oliver Warbucks, his personal secretary Grace Farrell, and a lovable mutt named Sandy.Lyric Light Opera returns to Kirkland Performance Center and McIntyre Hall (Mount Vernon) this Fall 2013, bringing to the stage another acclaimed and exceptional family show that has garnered a staggering 14 Tony and Drama Desk awards, ANNIE. The well-loved classic has been performed on Broadway over 2,000 times and has appeared professionally on stage in over 27 countries around the globe. ANNIE runs October 5-20 at Kirkland Performance Center and November 2-17 at McIntyre Hall (Mount Vernon).Lyric Light Opera of the Northwest is committed to enriching peoples' lives through achieving excellence in musical theatre, and to bringing exceptional, family-friendly musical productions to the stage.Lyric Light Opera of the Northwest 1090 Sea Mist Lane Camano Island, WA 98282Brenda Mueller, Artistic Director (360) 387-3948 Brenda@lyriclightopera.org