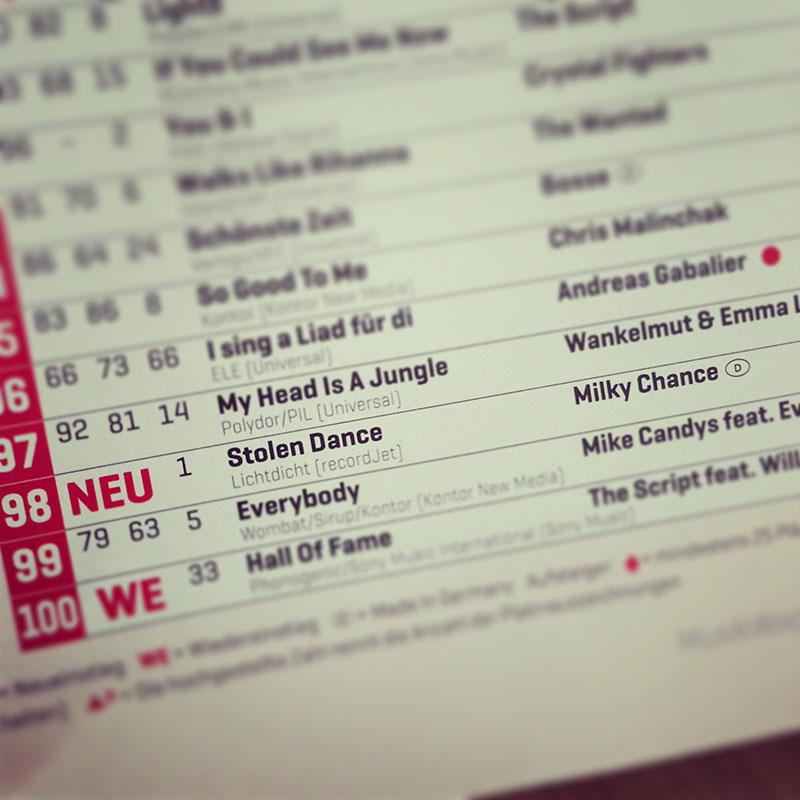 - Number 98 on the German Singles Charts with Stolen Dance - Another chart success for the young Berlin-based music distributorIn week 33 of 2013, another passenger of the Berlin music distributor and content aggregator recordJet managed to climb into the charts. Milky Chance entered the German Singles Charts at number 98 with their catchy tune Stolen Dance. In the previous months, the song had already enjoyed national radio airplay from Flensburg to Munich.In May this year, Milky Chance were voted recordJet Passenger of the Month by an independent panel of music journalists, and received free basic promotion as part of the award. Since the release of the single Stolen Dance on the 5th of April 2013, the sales figures show a constant upward trend.Stolen Dance was one of the favorites on our crew playlist for several weeks, we played it repetitively, and not just because Milky Chance are our passengers. The guys from Milky Chance and Lichtdicht Records are both extremely friendly and down to earth, and also have extraordinary musical talent, says Jorin Zschiesche, Managing Director of recordJet, on this successful entry into the charts. We cannot wait to see what musical hits Milky Chance will produce in future, and we are sure that the band is on a path straight to the top.recordJet is a digital music distributor and content aggregator based in Berlin, helping musicians and labels to sell their music online worldwide. Music uploaded on www.recordjet.com will be distributed to mp3 stores and streaming services like iTunes and Spotify, where the music is then available for sale or for streaming. Unlike other content aggregators, recordJet pays out 100% of the royalties to the musicians which also keep all of their rights, for a small annual fee. Many additional service offerings like physical distribution into 500 shops, CD pressing and professional promotion make recordJet an allround service. recordJet was founded in 2008 with the goal to provide the European music market, especially unknown artists and small labels, with an attractive and affordable way of music distribution. recordJet went online in 2010 and has since then expanded its services continuously. In April 2013 the company went international with the launch of its highly anticipated English website.Schillerstr. 4-5 10625 Berlin GermanyPhone.: +49 (0)30 65005199 Fax.: +49 (0)30 67951070E-Mail: recordjet@recordjet.com Internet: www.recordjet.com

04-13-2022 | Energy & Environment
Global Market Monitor
Lithium Battery Coating Machine Market Value Projected to Expand by 2027 | Hiran …
Potential attainments, partnerships, novel product launches and mergers are some of the key strategies followed by the key players of the market. A resolute market outline is provided in this Lithium Battery Coating Machine market report, which provides inside and outer data of different divisions. In order to provide key advancements and exact market scenario, analysts make use of quantitative investigation methodologies. Central participants are able to obtain compelling dynamic
07-02-2021 | Business, Economy, Finances, B …
Coherent market insights
Micellar Casein Market | Arla Foods Ingredients Group P/S, The Milky Whey, Inc., …
Coherent Market Insights have included a latest addition of global market research report titled Micellar Casein Market to its expansive repository. The report studies primary and secondary research in order to analyze the data effectively. The market study further also draws attention to crucial industry factors such as global clients, potential customers, and sellers, which instigates positive company growth. In order to gauge turning point of the businesses, significant market
11-23-2020 | Business, Economy, Finances, B …
The Insight Partners
Evaporated Filled Milk Market Forecast to 2027 – Alaska Milk Corporation, Fras …
Evaporated filled milk is defined as a prepared blend of vegetable oil, stabilizers, skim milk, and vitamins. This form of filled milk is a fat achieved by adding fat extracted from a fat source such as vegetable fat and not cows. Such type of milk is not considered as suitable for drinking, owing to its unique flavor and is mainly used in the manufacturing of dairy products including ice cream
03-23-2020 | Industry, Real Estate & Constr …
Industry Growth Insights
Evaporated Filled Milk Market Emerging Trends || Leading Players are Nestle, Mil …
The Evaporated Filled Milk Market report includes overview, which interprets value chain structure, industrial environment, regional analysis, applications, market size, and forecast. The report provides an overall analysis of the market based on types, applications, regions, and for the forecast period from 2020 to 2026. It also offers investment opportunities and probable threats in the market based on an intelligent analysis. This report focuses on the Global Evaporated Filled Milk Market
10-30-2018 | Business, Economy, Finances, B …
Research Report Insights
Micellar Casein Market 2026 | Arla Foods Ingredients Group, The Milky Whey, Prot …
Research Report Insights offer a 10-year forecast for the Micellar Casein market between 2016 and 2026. In terms of value, the market is expected to register a CAGR of 5.9 % during the projected period. The primary objective of the report is to offer insights on the advancements in the Micellar Casein market. The study demonstrates market dynamics that are expected to influence the current environment and future status of
10-23-2018 | Science & Education
QYresearchreports
Global Acid Casein Market Trend Analysis by 2025 : Rovita, Nutra Food Ingredient …
Qyresearchreports include new market research report "Global Acid Casein Market Professional Survey Report 2018" to its huge collection of research reports. This report studies the global Acid Casein market status and forecast, categorizes the global Acid Casein market size (value & volume) by manufacturers, type, application, and region. This report focuses on the top manufacturers in North America, Europe, Japan, China, India, Southeast Asia and other regions (Central & South America,
Comments about openPR
9 o'clock: discuss press release with client, 10 o'clock: submit release to openPR, within the briefest possible time release is published and displayed in a prominent place on openPR.de. I am thrilled!
Zehra Spindler, Calypso Now! - Communication Agency