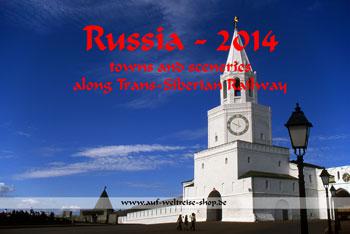 Under the title „Russia 2014 - towns and sceneries along Trans-Siberian Railway“has just published the calendar of the German globetrotter Jan Balster. The calendar: What longing, the trans-Siberian railway. The longest railroad line of the world. A life's dream comes true. It widens of the country, the Russian soul. A trip by eight time zones along the classical route of the Trans-Siberian Railway, from Moscow about the cloister of Ivolginsk, Baikal, the holy sea of the Russians to Vladivostok, 9258 kilometres. The observer succumbs to the fascination of outstanding photographies that is sedate in scene optimally.Each leaf of the calendar is printed on both sides, a photography is in the upper area and in the low part of the calendars of the respective month. Additionally, spaces present themselves there for own enrollments sufficiently. Bibliographical statements: Jan Balster „Russia 2014 - towns and sceneries along Trans-Siberian Railway“ Price: ca. 31,50 US-Dollars or ca. 18,10 Pounds Sterling, Scope: 26 pages, 12 photographies, Duration: 12 months Initially-date: 1. January 2014 Format: 11 x 17“, 28 x 42 cm Production: coil binding, full-color interior ink Lulu publishing houseThe calendar is also publishes in German under the title „Russland 2014 – Städte und Landschaften entlang der Transsibirischen Eisenbahn."Available in the Internet: http://www.lulu.com/spotlight/trotterAuthor: „As globetrotters seeks the authentic he in the country and in the human being... “, Sächsische Zeitung / Germany Photography, for him, is more than a profession - it is a passion. Jan Balster, from Dresden, Germany, is a freelance writer, travelling journalist and professional photographer, who prefers to work with simple analogue equipment. He is particularly interested in black and white photography and in FineArt prints. He is on the constant look-out for intense, lingering moments of experience - moments that prevail and continue to fascinate for many years.About his trips to Russia and Central-Asia as well as plans, he informs on his Homepage: www.auf-weltreise.de Under other has published from him: Jan Balster: „Uzbekistan - reports from the country of the fairy tales“; 2012; ISBN: 978-3-8482-1826-4; 120 sides; 57 s/w photographs; 9.99 euroJan Balster; „On foot from Dresden to Dublin “– 3100 kilometers on foot and without money through Europe; ISBN-13: 978-3-89793-124-4; 14,90 Euro; 294 pages with 100 illustrations; Berlin 2006; Language: German; edition ost/ Verlag am ParkCo-Author with the „Self-Trip-Handbook “; Peter Meyer publishing house; 5.Auflage; 2011; 25 Euro; Language: German; contributions: Eastern Europe, Russia and central-AsiaJan Balster Leipziger Strasse 149 01139 Dresden Tel:0351-8567900 jan-balster (AT) auf-weltreise.de http://www.auf-weltreise.de http://www.edition-eurasien.com