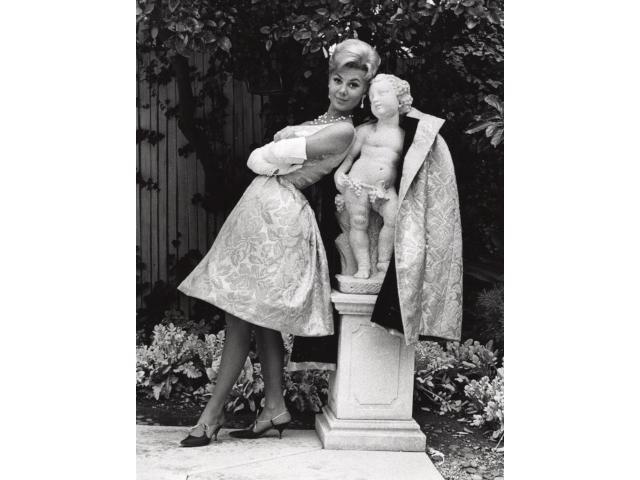 Downtown Los Angeles, CA, USA, June 9, 2022 -- On Wednesday, June 29th, Andrew Jones Auctions will present, online, property from two different collections of Hollywood legends. At 10 am Pacific time will be property from the collection of film producer Dino De Laurentiis and his wife Martha, featuring Italian and European antiques, furnishings, fine art and decorative items.Then, at 1 pm, the private collection of the Emmy winning and Golden Globe nominated actress, comedienne and musical performer Mitzi Gaynor will come up for bid, featuring fine art, antiques, books, silver, porcelain and glass, decorative arts and Louis Vuitton luggage. Ms. Gaynor continues to share her dazzling brand of showmanship today with audiences worldwide.Dino De Laurentiis (1919-2010) and his wife Martha (1954-2021) were partners in filmmaking as well as marriage. The couple produced numerous films together and built three studios on different continents. When they met on the film Ragtime in 1980, Dino had already made a remarkable contribution to cinema, transforming the very way people view Italy and Italians.His wife, the American-born Martha Schumacher, joined the Dino De Laurentiis Corporation in 1980 and creatively produced her first film with Dino on the adaptation of Stephen King's book Firestarter. Their partnership led to films including The Bounty, Year of the Dragon, Manhunter, Blue Velvet, Bound, Crimes of the Heart, the psychological thriller Hannibal and Red Dragon.After Dino's passing in 2010, Martha De Laurentiis furthered their legacy, heading the De Laurentiis Company from its long-standing office on the Universal Pictures backlot and developing a broad slate of film, television, and an opera. During their 30-year marriage, Dino and Martha de Laurentiis formed a collection that reflected their backgrounds and aesthetics.European in style but peppered with Americana, their pieces range from a pair of Italian Baroque paint decorated wall lights from the first half of the 18th century (est. $2,000-$3,000); to an impressive English mahogany extension dining table (est. $2,000-$4,000); to a pair of Italian fruitwood reliefs of seated lions from the second half of the 18th century (est. $1,000-$2,000).Also offered will be a number of works by Italian artists Corrado Cagli and Mirko Basaldella, with whom Dino worked to create scene designs for his films. In total, Dino has produced, presented, financed or distributed over 600 films. His productions have earned four Academy Awards, 30 Academy Award nominations, and approximately 100 different awards worldwide.Mitzi Gaynor (b. 1931) and her late husband, Jack Bean (1922-2006), a talent agent and public relations executive for MCA, were married for 52 years and were absolutely inseparable. They loved to travel, decorate, and entertain. Throughout their decades together they built a very personal collection that was admired by all who visited them. These items will be in the auction.Highlights will include an 18th century portrait of an aristocratic lady attributed to Jean Marc Nattier (est. $8,000-$12,000); a charming English portrait of Master Robin Vanecke painted in the manner of John Hoppner (est. $8,000-$12,000); and an early American coin silver three-piece coffee service by R & W Wilson of Philadelphia, made circa 1825 (est. $800-$1,200).One can envision Mitzi standing next to her Bosendorfer ebonized 7-foot baby grand piano (est. $6,000-$8,000) with her accompanist at the keys rehearsing for one of her countless stage shows or film roles. Also offered will be a Tiffany Studios patinated bronze scarab inkwell, from the early 20th century (est. $3,000-$5,000). This is just a small sampling of Ms. Gaynor's collection.Mitzi Gaynor made her motion picture debut alongside Betty Grable in the movie My Blue Heaven and went on to dazzle audiences in some of the most revered musicals of Hollywood's Golden Age, including There's No Business Like Show Business with Ethel Merman and Marilyn Monroe; Anything Goes with Bing Crosby and Donald O'Connor; Les Girls with Gene Kelly; and as Ensign Nellie Forbush in the film adaptation of Rodgers & Hammerstein's South Pacific.Online bidding will be facilitated by AndrewJonesAuctions.com, Invaluable.com and LiveAuctioneers.com. Absentee bids will also be accepted. Safe, physically distanced live previews will be held by appointment at the Andrew Jones Auctions gallery prior to the auction.Plans may change in accordance with Los Angeles County Department of health Covid-19 restrictions. Contact the gallery for details. The gallery is located at 2221 South Main Street in downtown Los Angeles. Absentee bids will also be accepted. To schedule a preview appointment, call (213) 748-8008; or, you can email them at info@andrewjonesauctions.com.For more information about Andrew Jones Auctions and the sale of property from the collections of Hollywood legends Dino and Martha De Laurentiis and Mitzi Gaynor on Wednesday, June 29th, please visit www.andrewjonesauctions.com. Updates are posted frequently.Aileen Ward Andrew Jones Auctions 2221 South Main Street Los Angeles, CA 90007 USA 213-748-8008 aileen@andrewjonesauctions.com https://www.andrewjonesauctions.comOpened in the summer of 2018, Andrew Jones Auctions is a full-service fine art and antiques auction house specializing in the liquidation of estates and collections featuring fine art, antiques and collectibles. The firm understands market trends and has foresight for the 21st century. The highly experienced staff has a wealth of knowledge with international savvy, having worked for many years at major international auction houses in North America and Europe, sourcing property from all corners of the United States. Andrew Jones Auctions' sales are diverse and eclectic, and feature fine diamonds to contemporary art, spanning from the antiquity to today. For more information about Andrew Jones Auctions please visit www.andrewjonesauctions.com.