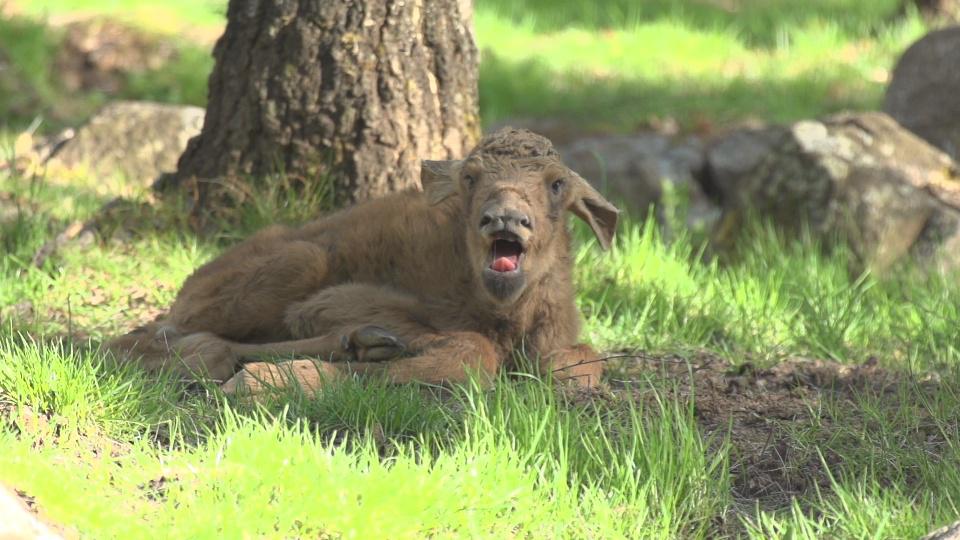 In retrospect, was a time filled with tension. Wildlife filmmaker Jens Klingebiel had set a target to film the complete birth of moose calves in Sweden this year. The first calves are expected in Sweden May 5, and thus the successful producer of so-called wildlife stock footage clips is on the way. After 18 hours of driving the wildlife filmmaker comes with full equipment in Dalarna, one of the most beautiful regions of Sweden. Here he is trying to reach its extremely high target Act. It is very rare recordings that have probably never been filmed on this scale and of this quality. Since the recordings are to be created for a new TV documentary and largely depends the success of this documentation on the success of these recordings, the mood of wildlife filmmaker Jens Klingebiel is very tense and concentrated. Day and night Klingebiel sits at his post. The fear of missing the right moment ever in the neck. Then there is the question of playing with the technology, is the battery. Would be a disaster, even if the moose should decide to bring their calves at night or in the pouring rain on the earth. Two weeks of waiting, watching and filming the wildlife filmmaker moose. Come the moose calves in an unnoticed moment or in low light, if the whole action for free. But as if the moose would take into account these needs of the animal filmmaker, she directs the birth after exhausting weeks of waiting for a most wonderful sunshine near the animal filmmaker. And so succeed Jensklingebiel unique recordings in the best HD quality, will probably be admired already in 2014 on television.Wildlife filmmaker Jens Klingebiel produced primarily known wildlife stock footage films. These are movies that are utilized in TV movies, advertising or websites. Consequently, the website is called by Jens Klingebiel then www.wildlife-stockfootage.com.In addition, Jens Klingebiel has also produced its own documentation. The latest movie "moose hunting in Sweden" shows the great deer hunting in the beautiful countryside of Sweden. Also Dreamland Sweden and Europe are wild movies from Jens Klingebiel. Information can be found at www.dvd-tierfilme.de.Jens Klingebiel is one of the sucessful producer of wildlife stock footage. His clips are used in tv-films, commercials and on websites.Jens Klingebiel Tier- und Naturfilm Im Bruchhof 3 34225 Baunatal Germany klingebiel@web.de www.wildlife-stockfootage.de www.wildlife-stockfootage.com www.dvd-tierfilme.de

07-27-2018 | Business, Economy, Finances, B …
Construction Robotics Market
Global Construction Robotics Market Professional Survey Report 2018 : Brokk AB ( …
Researchmoz added Most up-to-date research on "Global Construction Robotics Market Professional Survey Report 2018" to its huge collection of research reports. This report studies the global Construction Robotics market status and forecast, categorizes the global Construction Robotics market size (value & volume) by manufacturers, type, application, and region. This report focuses on the top manufacturers in North America, Europe, Japan, China, India, Southeast Asia and other regions (Central & South America,
01-31-2018 | Business, Economy, Finances, B …
Fior Market Reports
Global Remote Cntrolled Demolition Robots Sales Market 2017 - Brokk AB (Sweden), …
Global Remote Cntrolled Demolition Robots Market 2017, displays an accomplished and detailed study on the present state of the Remote Cntrolled Demolition Robots market worldwide, offering basic analysis of Remote Cntrolled Demolition Robots market including definitions, classifications, applications and industry cost structure, supply chain, Remote Cntrolled Demolition Robots Market report furnishes development policies and plans as well as manufacturing procedures and expertise. The report’s examination is based on technical data and
06-13-2017 | Business, Economy, Finances, B …
ReportsWorldwide
Agrochemicals Market in Sweden
ReportsWorldwide has announced the addition of a new report title Sweden: Agrochemicals: Market Intelligence (2016-2021) to its growing collection of premium market research reports. The report “Sweden: Agrochemicals: Market Intelligence (2016-2021)” provides market intelligence on the different market segments, based on type, active ingredient, formulation, crop, and pest. Market size and forecast (2016-2021) has been provided in terms of both, value (000 USD) and volume (000 KG) in the report. A
06-05-2017 | Business, Economy, Finances, B …
ReportsWorldwide
Smoking Tobacco in Sweden, 2016
ReportsWorldwide has announced the addition of a new report title Smoking Tobacco in Sweden, 2016 to its growing collection of premium market research reports. "Smoking Tobacco in Sweden, 2016" is an analytical report by GlobalData that provides extensive and highly detailed current and future market trends in the Swedish market. It covers market size and structure along with per capita and overall consumption. Additionally, it focuses on brand data, retail pricing,
11-09-2016 | Logistics & Transport
IVU Traffic Technologies AG
Transdev Sweden chooses IVU.rail
IVU continues to develop its strong market position in Scandinavia Berlin, 9. November 2016 – IVU Traffic Technologies AG is strengthening its market presence in Sweden with a new contract. Transdev Sverige AB, the Swedish branch of the global transport company Transdev, will use the specialised standard software IVU.rail to plan all rail franchises’ trains as of December 2016. Transdev Sverige is one of Sweden’s largest transport companies and has multiple
11-05-2011 | Business, Economy, Finances, B …
yStats.com GmbH & Co. KG
Sweden leading in Internet Use
The latest “Sweden B2C E-Commerce Report 2011” compiled by market research firm yStats.com provides information about B2C E-Commerce in Sweden. Aside from internet use and online purchases, also revenues and competitors are analyzed. Sweden is one of the leading countries worldwide when it comes to internet use. Despite the high rate of internet penetration, there is still further potential for growth. Online purchases very popular with Swedes In 2010, as
Comments about openPR
OpenPR is clearly structured and remains true to its principle of confining itself to the essential parts. OpenPR has proven to be a very good and reliable partner to our media agency: Within the shortest time the releases are online and go down well with the media representatives. The success of OpenPR is reflected in the steadily increasing number of press releases. It is good that OpenPR exists!
Ursula Koslik, Director Marketing & PR, F+W Hamburg