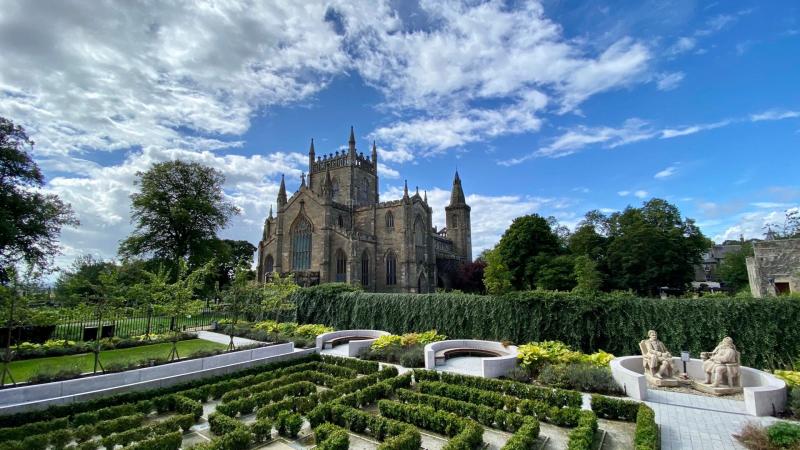 Scotland's leading digital learning and assessment specialist, eCom Learning Solutions, has welcomed the decision to name Dunfermline as one of eight new cities, so designated to mark Queen Elizabeth II's Platinum Jubilee.According to the UK's Cabinet Office, Dunfermline, as a new city, can expect a boost to local communities and an opening-up of new opportunities for people who live there. It cited research suggesting that, after it was appointed a city in 2012, Perth, in Scotland, has seen the local economy expand by 12% in the decade - principally through this putting Perth 'on the international map' and, thus, attracting foreign business."With eCom Learning Solutions' headquarters being in Dunfermline for the last 25 years, I'm delighted with its new city status," commented Wendy Edie, eCom's Managing Director. "For a place with such rich royal history, it's fitting that Dunfermline is becoming a city as we celebrate our longest-serving monarch's Platinum Jubilee."This new status should help raise our profile, along with all Dunfermline-based businesses that are eyeing international markets. It should certainly give a boost to eCom's international business - in terms of the eLearning and eAssessment - including virtual reality (VR) assessment - materials we produce, along with the systems we offer, including the eNetLearn learning management system (LMS)."eCom already generates nearly 55% of its annual revenue from outside the UK, with a further eight per cent coming from sales to organisations in England," added Wendy. "We have current clients in the USA, Canada, the European Union, the Middle East and the Indian sub-continent - and we're opening-up markets in southern Africa among other places."The announcement of Dunfermline's new civic honours makes it Scotland's eighth city, joining Glasgow, Edinburgh, Aberdeen, Dundee, Perth, Stirling and Inverness. Dunfermline, which has a population of nearly 59,000 people, was granted the honour based on its royal associations and cultural heritage, as well as the uniqueness of its community and distinct local identity.While Dunfermline's most famous son is Andrew Carnegie, whose steel industry helped to build America, the city was once Scotland's capital and one of the seats of the kings of Scotland in the Middle Ages. The new city's first notable incident occurred in the 11th Century when Malcolm III, King of Scots, married Margaret at the church (later the Abbey) in Dunfermline.Dunfermline Abbey became a royal mausoleum for the Scottish Crown, with some 18 royals, including Robert The Bruce, buried there. The Union of the Crowns of Scotland and England in 1603 ended Dunfermline's town's connections, when James VI (known as James I in England) relocated the Scottish Court to London in 1603.eCom Learning Solutions 18B Dickson Street Dunfermline Fife, KY12 7SL Scotland UK +44 01383 630032 PR contact: Bob Little, Bob Little PR, 01727 860405/ 07850508209; bob.little@boblittlepr.comAbout eCom eCom (https://ecomlearningsolutions.com/) creates innovative learning solutions - aimed at increasing learning engagement and driving productivity - to help organisations achieve their goals. With offices in Dunfermline, Scotland, and Athens, Georgia, in the USA, but with customers from around the world, eCom focuses on the delivery, tracking and reporting of workforce learning and development through innovative technologies. Its products and services address a range of workforce management, development and training challenges, including eLearning, online assessment, blended learning, competency management and accreditation.

06-27-2022 | Logistics & Transport
Bob Little PR
Transport Secretary Grant Shapps backs rail industry to bolster jobs during visi …
The UK's Secretary of State for Transport, Grant Shapps, has recently visited manufacturer Silver Fox, highlighting the ongoing work of the rail sector in generating employment, skills and prosperity in difficult economic times. During the visit, Shapps met with employees from Silver Fox and the Railway Industry Association (RIA) and was given a tour of the site. He also unveiled a new specialist printing press, among a range of other machines,
04-19-2022 | Energy & Environment
Bob Little PR
eCom helps increase safety and reduce costs for the offshore wind turbine indust …
Scotland's leading digital learning and assessment specialist, eCom Learning Solutions, has developed bespoke eLearning materials to help make offshore wind turbine maintenance technicians' jobs safer - especially when they are working in rough seas. eCom has researched and produced these eLearning materials for the engineering innovator, Pict Offshore, which develops, builds, sells and supports new access, lifting and height safety solutions for the offshore wind energy sector. Founded in April 2019,
03-15-2022 | Energy & Environment
Bob Little PR
eCom helps in achieving the UK and Scottish Governments' Energy Strategy aims
Helping people re-focus their energy-related industry skills - along with up-skilling and re-skilling for the energy industry - are key ways in which the digital learning and assessment specialist, eCom Learning Solutions is contributing to achieve the aims of the UK's and the Scottish Government's Energy Strategies. A member of both Offshore Energies UK (OEUK), the leading representative body for the UK offshore oil and gas industry, as well as of
02-15-2022 | Energy & Environment
Bob Little PR
Geoscientists' competency assessment comes to Australia
Australia is the latest continent to get a taste of a new online self-assessment tool to benchmark the skills within the international operations geoscience community and identify individuals' skills gaps. The tool enables operations geoscientists, in the oil and gas sector, to objectively assess the level of their current skills - which they need to be successful in their role. A broad discipline, geoscientists study the Earth's structure and formation, analysing

03-22-2021 | Business, Economy, Finances, B …
Bob Little PR
Pandemic and Brexit Prompt Surge in Online Learning and Assessment
Over the last year – faced with Covid-19 and Brexit among other issues - people have become a lot clearer about what matters to them and, therefore, their priorities in work and life. Lockdown has given people time to re-evaluate their lives and reassess their priorities. “At least, that’s what our customers – especially those in the public sector – have been telling us,” said Wendy Edie, Managing Director of the
02-15-2021 | IT, New Media & Software
Bob Little PR
eCom counters Covid-19’s Adverse Effects on Learning and Development
As Covid-19 continues to have a major effect on the UK’s economic activity – encouraging both remote working and remote learning - eCom Scotland is discovering a growing appetite among customers for ready-made eLearning materials. As a result, eCom – Scotland’s leading digital learning and assessment specialists – has been partnering with global generic eLearning content specialists, OpenSesame. Under the firms’ collaboration agreement, OpenSesame’s curated catalogue of over 20,000 eLearning courses
01-11-2021 | IT, New Media & Software
Bob Little PR
eCom adds consultancy services to expand its client offering
As part of its strategic move to supply over-arching learning and development (L&D) solutions to its clients around the world, the digital learning and assessment specialist, eCom, is developing its consultancy offering. Wendy Edie, eCom’s Managing Director, explained, “eCom originally focused on developing and providing innovative learning products and services. “Now we’ve reached our 25th year and have built an international reputation for dependability and reliability, we’re not just broadening our
08-15-2016 | Industry, Real Estate & Constr …
Marsden Weighing Group
Popular, waterproof bench scale available with greater capacity, following custo …
Weighing scales manufacturer Marsden is aiming to make life easier for food retailers with an upgrade to its most popular bench scale. The Marsden B-100 Bench Scale has an IP68 rating, meaning it is fully waterproof and can withstand punishing environments. The stainless steel housing means it can be easily hosed down and kept hygienic. Now, following feedback from customers, the B-100 has now been made to withstand capacities of up
03-27-2015 | IT, New Media & Software
Virtosoftware
Kanban Board - Smart Solution for SharePoint Task Management
VirtoSoftware releases a new Office 365 App: Virto SharePoint Kanban Board for SharePoint Online - a next generation Kanban Board application. This app is an easy-to-use, convenient and colorful tool for SharePoint task management, which visualizes and filters tasks in Kanban Board view. With SharePoint Kanban Board App, users can quickly highlight obstacles in business processes and improve collaborative work. Now less time is spent on organization and task management. SharePoint
09-06-2010 | Leisure, Entertainment, Miscel …
Carlton Bingo plc
Carlton Bingo Launch Customer Focused Website
Carlton Bingo plc, the UK's 4th largest land based bingo operator, launched an updated customer-focused, interactive website this month. The site, carltonbingo.com, is designed in direct response to Carlton’s research into what the customer really wants. Carlton Bingo is a well known brand in Scotland and the North East of England through it’s presence in many major town and cities, and includes revent investment in new build clubs such as
Comments about openPR
We publish our press releases on openPR.de because we like people who are "open" - just like us.
Frank Obels, CEO, INCONET - Informationssysteme, Communication und Netzwerkberatung GmbH