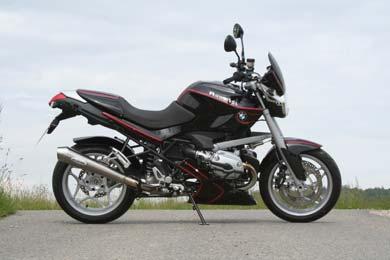 Ritzenried. Exactly one month before the BMW Motorrad Days, the Hornig company presents its conversion of a R1200R. This roadster is ex factory designed in a quite puristic way which gives enough surface to add or change some individual details. The basic thought behind the conversion was to give the R a more sportive look which should at the same time be quite discreet and, above all, be realizable for the later customers. The concept was produced by a spanish designer to make sure that all elements are perfektly matching. What came out is a R in classic black with red stripe-highlights and some modifications. To turn its sound more into the racing direction, a PowerCone by Remus was mounted. Its titan version fits perfectly to all the other aluminium parts and brings an improved performance up to 4 PS. Also an average to make the bike look more sportive is the engine-spoiler. It is made of GRP and can additionally be furnished with a grid in its front part. To not be forced to relinquish in comfort, the spoiler can be used together with the main stand. For those drivers who are on their way without pillion, the rear seat cover, also made of GRP is a nice amendment. It nestles perfectly to the R's tail and can be demounted quite rapid if you decide to drive with pillion. The small windscreen has consciously been made that small to save the roadster's character. However, it provides enough protection from the wind to be able to drive for more than 30 minutes. The rear hugger (also GRP) protects the driver's and pillion's feet from splashing dirt and water to reach the destination quite dry. All GRP parts will be delivered in black primed (like in the pictures) and can painted in every colour. As smaller details, many covers like Swingarm pivot cover, Frame cover, Fork tube cover, Oil filler plug, Axle journal cover, Telelever end caps, Rear wheel lug cover or Engine cover made of anodized aluminium were added. A more comfortable way of driving provide the Mirror extensions which improve the view to the back and also Shift lever- and Brakepedalenlargement which permit a safer shifting and braking by their aggrandized contact area. To to keep away insects and dirt from the oil cooler, a big grid was mounted. For a better stand on uneven ground, there's the sidestand foot enlargement which is made of black anodized aluminium, too. All in all it is a conversion with many small details which all work together quite well and make up a pretty general view - that of a sportive R1200R.Motorradzubehör Hornig GmbH Hochwiesenweg 2 93458 Eschlkam/Ritzenried Germany Tel: 0049 9948 1070 Fax: 0049 9948 9559775 www.motorradzubehoer-hornig.de Press relation: Tobias Hornig Telefon 09948 955 536 Telefax 09948 955 9775 eMail: press@upgrade-your-bike.deAbout Motorradzubehör Hornig GmbH: Since 2001 the company has been developing and producing special accessory for BMW motorbikes made of aluminium, high-grade steel, GFK and carbon. Because of their passion for riding motorbikes they came to this and since that time, they have been upgrading their range of products with new specific products as well as with the new BMW models.

04-10-2014 | Tourism, Cars, Traffic
BMW Motorradzubehör Hornig
BMW R1100R conversion by Hornig
In time for the start of the motorcycle season Motorcycle Accessory Hornig presents an unusual conversion: The Hornig Team wanted to create a cool Scrambler from a used R1100R. The intention was how you can manage this with reasonable money-and time effort. By bringing the second hand R1100R that cost 2.500,00 euros, almost to the basic state, they put the base for the conversion. For a first optical change,
03-26-2012 | Tourism, Cars, Traffic
BMW Motorradzubehör Hornig
BMW F800R customization by Hornig - from naked bike to tourer
The new review of the customization of the BMW F800R by Hornig. How to build a naked bike with tourer qualities, for long rides. Cham. Motorcycle Parts Hornig introduces their latest conversion of a BMW F800R MY 2012. The goal was to turn the naked BMW F800R into a real touring motorcycle. The three main components of this were the new ZTechnik VStream windshield with a height of 40,7cm and a width
06-03-2008 | Tourism, Cars, Traffic
BMW Motorradzubehör Hornig
BMW K1200GT Conversion by Hornig
Ritzenried. - The BMW K1200GT conversion from Motorcycle Accessory Hornig GmbH was presented for the first time at the BMW Motorcycle Mountain Days in Kaprun, Austria and the visitors loved it. The BMW deluxe Tourer is already a very good motorbike but Hornig tried to design it unique and to improve its touring and comfort qualities as well as individualizing it for the driver. In order to improve its touring qualities the
06-04-2007 | Tourism, Cars, Traffic
BMW Motorradzubehör Hornig
Hornig takes part in Long-Distance Rides
Hardest conditions for driver and bike Ritzenried. The Hornig Company has found a new way of testing its products under unbelievable difficult conditions: by sponsoring a Long-Distance rider of the IronButt Association (IBA). The IBA's members are Motorcyclists who enjoy riding more than 1000 miles in one day, of course, in a safe way. The Hornig products have to pass that long-term test to assure best quality to the later customers.

09-28-2012 | Leisure, Entertainment, Miscel …
Motorradzubehör Hornig GmbH
New Ztechnik VStream Windshields - for BMW R1200GS, R1200R, F800R, K1600GT and K …
Motorcycle Accessory Hornig added lots of new ZTechnik windshields to their product range. ZTechnik is an OEM-Manufacturer for BMW Motorrad. ZTechnik introduced a new design of their popular VStream(r) windshield for BMW rider. The distinctive VStream shape features a wider profile at the top of the windscreen and a curvature that pushes turbulent, noisy airflow to the side and away from the rider’s helmet. No other windscreen for your BMW possesses
Comments about openPR
9 o'clock: discuss press release with client, 10 o'clock: submit release to openPR, within the briefest possible time release is published and displayed in a prominent place on openPR.de. I am thrilled!
Zehra Spindler, Calypso Now! - Communication Agency