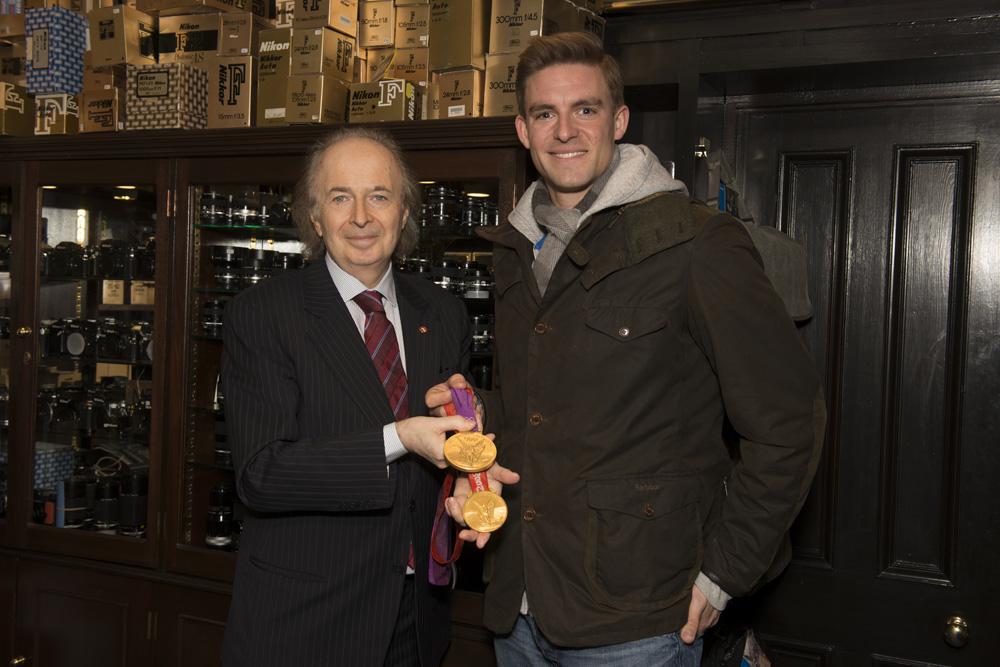 The Olympic champion and dedicated Nikon user, Pete Reed, visits Grays of Westminster - something he has wanted to do for a long time.London - Double Olympic Gold Medalist (in the Coxless Four - Rowing) from Beijing 2008 and London 2012 and keen Nikon user, Pete Reed, recently visited Grays of Westminster, the award-winning Nikon-only dealer in London.Grays of Westminster founder, Gray Levett said, "We were very honoured to be able to welcome Pete Reed MBE to Grays of Westminster. He graciously showed all the staff his two gold medals and we told him what an absolute inspiration he was to us all. The triumph of the British athletes at the Olympic Games created a wonderful feeling of unity and pride within the British Isles; it is he and others like him that continue to encourage and inspire us at Grays of Westminster to push our standards of service and professionalism to ever greater heights."Pete Reed spent nearly three hours in the shop and left laden down with a number of Nikon gold boxes. In a message to Gray Levett he said: "You have a wonderful place and a cracking group of people around you and I pride myself on being a good judge of character. It was an honour to have so much of your time and a personal tour all afternoon and it's great to know that I can come back anytime."About Grays of Westminster Grays of Westminster, the multi-award-winning Nikon-only shop, was founded over a quarter of a century ago by Gray Levett with the idea of creating a world-class camera store, offering a service that was second to none. It is superbly located in a quiet area of central London, a few minutes walk from Victoria Railway Station; the Houses of Parliament, Buckingham Palace, the Tate Britain, River Thames and Knightsbridge are all within easy reach. Grays of Westminster is not simply a famous Nikon camera shop; it is, to many photographers around the world, an institution. It can trace back its beginnings from a modest mail order company to its present, highly-respected position in the photographic industry.For more information, please contact: Gray Levett Grays of Westminster 40 Churton Street London SW1V 2LP+44 (0)20 7828 4925 info@graysofwestminster.co.uk http://www.graysofwestminster.co.ukSubmitted By: WorldWidePR.net