From youth competition to film screening 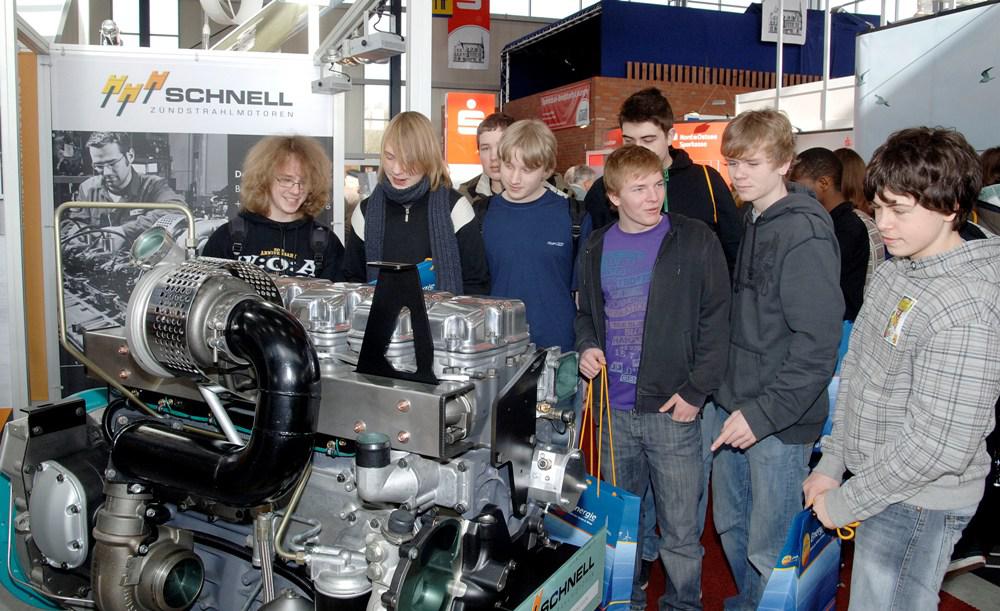 New Energy Husum attracts visitors with interesting fringe events Husum, 27.02.2013 New Energy Husum, the leading renewable energy trade fair, offers trade and private visitors, job seekers and families numerous informative and entertaining events from 21 to 24 March. The attractive fringe events include the JES! youth competition, a film about the energy transition, and the New Energy Slam speech competition. “The events providing an entertaining insight into the world of renewable energy”, says Peter Becker, managing director of Messe Husum & Congress. The Renewable Energy Career Days provide information about the latest jobs available, and bring together job seekers and employers in the biomass, solar and wind sectors. School pupils present their winning projectsDuring the fair, last year’s three winners of the JES! Jugend.Energie.Spass. will be presenting their projects in Hall 3 (Stand 3HS3). The winners of the first prize analysed the complete energy consumption at their school and worked out ideas for improvement. One suggestion is that a photovoltaic system should cover the school’s power needs. The winners of the third prize constructed a parabolic reflector for heating domestic water supply with solar energy. And in 2013 the competition is once again being organised by S.A.T. Sonnen- und AlternativTechnik with Schleswig-Holstein’s minister for energy transition, agriculture, the environment and rural areas, Dr Robert Habeck, as patron. Also supporting the competition for the fifth time are Nord-Ostsee Sparkasse, Stadtwerke Niebüll, Gemeindewerke Leck, Stadtwerke Bredstedt and Messe Husum. Applications are invited from young people aged between 14 and 22 years old with ideas for how renewable energy generated in Schleswig-Holstein can be stored. The main prize is a smart meter system for installation in the winner’s school, and a personal meeting with Dr Robert Habeck. Deadline for applications is 31 May 2013.Film screening “Living with the Energy Transition”On Sunday 24 March, filmmaker and journalist Frank Farenski will be presenting his film Living with the Energy Transition at 14:30 in the Messe Husum auditorium. The film gives a breakdown of the electricity price, explains how the energy transition works and what role renewable energy plays in shaping electricity prices. The film also includes interviews in which solar power producers, politicians – including German environment minister Peter Altmaier – and a financial analyst express their views on energy transition. It also includes portraits of people who live with renewable energy. Science Slam and job fairThe second New Energy Slam at 18:30 on 22 March will be drawing visitors to the auditorium for exciting and amusing talks. Here anyone can present their own new, innovative ideas and own research on a subject relating to renewable energy. Speakers have ten minutes to enthral the audience with their speeches, and the audience will then give marks and so choose the winner.On 22 and 23 March in the NordseeCongressCentrum, visitors who themselves aspire to a career in the renewable energy sector can find out about job vacancies, training and retraining opportunities offered by job agencies, staffing agencies and training institutions. The A.S.I. Wirtschaftsberatung company will also provide free checking application documents and give advice for qualified staff and trainees looking for a job.About New Energy HusumIn recent years, New Energy Husum has established itself as one of the most important trade fairs for the renewable energy sector. Since 2002 it has served as a stage for decentralised energy generation using all kinds of renewable sources. Topics and techniques covered by the fair include small wind turbines (up to 100 kW), biogas, solid biomass (pellets, firewood and wood chips for heating systems), solar heating, photovoltaics, electric vehicles, near-surface geothermal energy, energy storage, energy-efficient building and mini CHPs. From 21 to 24 March 2013 experts and leading manufacturers will be meeting again in the North Frisian town of Husum to set the course for the innovations needed in what is a rapidly growing market.Messe Husum & Congress Catherine Diethelm Am Messeplatz 12-18 25813 Husum Tel.: +49 (0)4841 902 - 337 Fax: +49 (0)4841 902 - 246 eMail: diethelm@messehusum.de www.messehusum.dePress contact Press Agency Krampitz Iris Krampitz / Lea Schmitz Dillenburger Str. 85 51105 Cologne Tel.: +49 (0)221 912 49949 Fax: +49 (0)221 912 49948 eMail: contact@pr-krampitz.de www.pr-krampitz.com

11-12-2018 | Energy & Environment
Skylight Energy Melbourne
Skylight Energy Melbourne
Skylight Energy is the leading provider of solar energy in Australia. We specialise in high quality yet affordable renewable energy products for either your home or business. Our large selection of products consists of only the finest Tier 1 solar panels, solar inverters and home battery packs. All of our products have been approved by the Clean Energy Council, and certified for safety to the highest Australian and international standards. Whether
06-08-2018 | Energy & Environment
qyreports
Green energy
Green energy is the electricity derived from smooth assets generating minimum pollution and consists of sun photovoltaic, hydropower, wind electricity, bio-fuels and geothermal. expanded investments in era studies and improvement, supportive regulatory frameworks, extended consciousness and electricity security troubles and environmental concerns amongst others are fueling the boom in call for for clean and inexperienced energy. The report on the Global Smart Cards Automated Fare Collection System Market is a thorough
03-01-2017 | Energy & Environment
eSight Energy
Complete Energy Management from eSight Energy
Why choose eSight Energy? You can manage and reduce your energy with the eSight software by importing data into the software and managing your expectations with informative and intuitive graphs and charts. Please view the video here: https://vimeo.com/203430337 eSight Energy provides energy management solutions for use across any type of building or process. With installations across Europe, the US, Middle East and Asia, solutions are provided through a network of resellers
02-01-2011 | Business, Economy, Finances, B …
Breakthrough Energy Solutions
Breakthrough Energy Solutions
RenewAge Energy Solutions, which is based at Los Angeles in California, has just emerged as the fastest growing energy & water efficiency service provider in the country. The energy solutions and energy efficiency California offered by the company are able to reduce the electricity requirements in homes and commercial properties substantially. Because of this, the operating costs on electricity demands can be cut by as much as 30% to 60%.
11-15-2010 | Energy & Environment
Heraeus Noblelight
Plant Optimisation Saves Energy
Can the coating dry more quickly? Is it possible to reduce the rejection rate? Does the plant use too much energy? Many companies ask themselves questions like these. Energy and material costs are important considerations for industrial companies who wish to maintain or improve their competitiveness. At the same time, the optimisation of existing plant can often be the more sensible and cost-effective option over installing new plant. A
11-12-2009 | Energy & Environment
cronos imc GmbH
Reporting in Energy Trading
cronos imc combines expertise in energy trading and comprehensive reporting know how for an individual consulting service. In a few days to custom-fit and specific recommendations: This is the target of cronos imc GmbH. cronos imc provides energy traders the individual analysis of their Business Intelligence (BI) landscape. The special value lies in the vendor neutral approach. Using a checklist, all relevant information and associated processes that are needed for
Comments about openPR
We publish our press releases on openPR.de because we like people who are "open" - just like us.
Frank Obels, CEO, INCONET - Informationssysteme, Communication und Netzwerkberatung GmbH