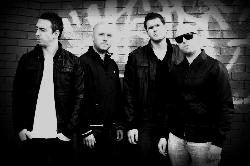 Sons Of The Helots, who will be at Opus Rocks

A headline act from the Northampton music festival, Whiteroom, has announced that it will be joining other bands from Northamptonshire at a charity gig night - Opus Rocks - organised by Northampton-based Opus Energy, on Friday 8th March at the Picturedrome, Northampton.The Cystic Fibrosis Trust has been Opus Energy’s chosen charity since 2010, during which time over £40,000 has been raised for the cause. The money is used to help research cures and provide treatment for the life-threatening inherited disease, which affects 75 children and adults in Northamptonshire alone. Opus Energy’s support of the Opus Rocks gig night will see all proceeds being donated to the Cystic Fibrosis Trust, and any profits made will be matched by the company.Whiteroom, well-known for performing throughout Northamptonshire and the surrounding area, will be joined by Sons Of The Helots, The Fallows and Heather Adelle Jones.Chris, an Opus Energy employee and singer in Sons Of The Helots: “We’re thrilled to be playing, it’s a great way to raise money for a fantastic cause and bring rock ‘n’ roll to Northampton. The audience is in for a treat!”Ciaran, drummer in The Fallows and an Opus Energy employee: “We’re a great supporter of all charities - the Cystic Fibrosis Trust does great work and this gig was the perfect opportunity to show our support. We’ve been busy recording our second album, so the Opus Rocks gig will serve as an ideal warm up before we go on tour in the summer; we have more than a dozen festival performances lined up as part of a multiple date headline tour across England, Ireland and Europe.”Annamarie Petsis Jones, Head of Human Resources, Learning and Development, Opus Energy: “A great night is on the cards with this line up of established and up-and-coming Northampton bands, some of whom feature Opus Energy employees. Thanks to the bands and our employees for supporting the Cystic Fibrosis Trust.”EndsEvent information - What: Opus Rocks fundraiser gig for the Cystic Fibrosis Trust - When: Friday 8th March, 2013, doors open at 7pm - Where: The Picturedrome, 222 Kettering Road, Northampton, NN1 4BN - Tickets cost £5 in advance or £7 on the door - Tickets are available from the Picturedrome: 01604 230 777, info [AT] thepicturedrome [DOT] com Notes to editors - Attached photo shows (left to right) Sons Of The Helots: Chris – bass, Elliot – drums, Simon – guitar and vocals, Simon – guitar and vocals. - Photos of all bands are available upon request - Interviews with the bands and an opus Energy representative will be available prior to the event or on the night - An interview with a representative from the Cystic Fibrosis Trust will be available prior to the nightAbout Opus EnergyOpus Energy is the UK’s leading business energy supplier. The company was founded by Charlie Crossley Cooke in 2002 and now employs 450 people over its Northampton and Oxford-based offices.Opus Energy supplies more than 150,000 business locations across the UK with power. Customers include: White Stuff, Paperchase, Stagecoach, Pizza Hut and Virgin Media.In addition to supplying energy, Opus Energy also purchases power from over 500 renewable generators in the UK which it then supplies to its customers.The management team has a 50 per cent stake in the business, while GDF SUEZ holds 30 per cent and Telecom Plus Plc has 20 per cent.For further information about Opus Energy, please visit www [DOT] opusenergy [DOT] com.For further information please contact Alexandra Dann Marketing Executive, Opus Energy Alexandra [DOT] Dann [AT] opusenergy [DOT] com 0845 218 2160 Royal Pavilion Office 2 Summerhouse Road Moulton Park Northampton NN3 6BJ

09-20-2013 | Energy & Environment
Opus Energy
Opus Energy weighs in with sponsorship of Chantelle Cameron, next rising star of …
B2B energy supplier Opus Energy has announced its sponsorship support for Northampton-born female boxer Chantelle Cameron. Chantelle will join Daniel Keatings, gymnastics World silver medallist and European champion, in a line-up of sporting talent being supported by Opus Energy as it looks to develop potential of all types in the local community. Chantelle is currently on the Great Britain women’s boxing programme training full time in the lightweight (60kg) weight class.
04-10-2013 | Energy & Environment
Opus Energy
Opus Energy announces apprenticeship intake in partnership with Northampton Coll …
Northampton-based Opus Energy has announced it will be awarding ten new NVQ Apprenticeship positions to local people in 2013, five of whom will start working at the company during National Apprenticeship Week on 11th March. The announcement follows the successful launch of Opus Energy’s apprenticeship scheme last year, when 11 apprenticeship roles were awarded. In order to fill the ten new positions, Opus Energy is working closely with Northampton
02-26-2013 | Energy & Environment
Opus Energy
Opus Energy is sponsoring the Energy Live Consultancy Awards
Business-to-business energy supplier, Opus Energy, is proud to announce its sponsorship of the Industrial & Commercial (I&C) Most Innovative Consultancy category at this year’s Energy Live Consultancy Awards. The awards, launched this year, aim to recognise the work done by consultants and set a standard for best practice. The entry criteria are challenging and entrants will be judged by an independent panel of experts. Winners will be announced at a ceremony
01-29-2013 | Energy & Environment
Opus Energy
Opus Energy research: renewable energy generation shifts up a gear
New research from business-to-business energy supplier, Opus Energy, suggests there has been a growing level of interest among UK businesses in generating renewable energy from their own premises versus 2011. One third of those surveyed by Opus Energy - 39%, up from 32% in 2011 - expect to introduce solar panels, wind turbines, hydro power or anaerobic digestion, for example, to their business, with almost half of these (48%) expecting

03-13-2017 | Associations & Organizations
IMAGE UNLIMITED COMMUNICATIONS
Massachusetts Restaurant Day for No Kid Hungry
We’re in danger of losing an entire generation of leaders, innovators and problem-solvers due to childhood hunger. The facts are that 13 million kids struggle with hunger in America, but together we can end childhood hunger. The Massachusetts Restaurant Association is partnering with Share Our Strength and its No Kid Hungry Campaign to help ensure that every child in the United States has access to healthy food where they live,
04-10-2013 | Energy & Environment
Opus Energy
Opus Energy announces apprenticeship intake in partnership with Northampton Coll …
Northampton-based Opus Energy has announced it will be awarding ten new NVQ Apprenticeship positions to local people in 2013, five of whom will start working at the company during National Apprenticeship Week on 11th March. The announcement follows the successful launch of Opus Energy’s apprenticeship scheme last year, when 11 apprenticeship roles were awarded. In order to fill the ten new positions, Opus Energy is working closely with Northampton
10-23-2012 | Energy & Environment
Opus Energy
Opus Energy marks The Sunday Times Top Track listing with addition of 100 furthe …
Independent energy supplier to UK businesses, Northampton and Oxford-based Opus Energy, has today announced the creation of 100 new jobs as it celebrates making The Sunday Times Top Track 250 league table for the second year running. Published on 14th October, the Top Track 250 league table ranks Britain's leading mid-market private companies with the biggest sales. This year Opus Energy ranked 129 in the prestigious table, a jump of 57
01-14-2012 | Health & Medicine
Walden Behavioral Care
Walden Planning Seminar on Binge-Eating Disorder
NORTHAMPTON, Mass., Jan. 13, 2012 – Walden Behavioral Care, LLC, one of the country’s leading hospitals for treating eating disorders, announced today that it will sponsor a half-day seminar on binge-eating disorder from 8 a.m. to noon on Thursday, Feb. 9, 2012 at the Hotel Northampton, 36 King St. Speakers will include Christina Wood Baker, Ph.D., a behavioral health specialist, who will discuss, “The Basics of BED for Clinicians: What Is
03-25-2011 | Business, Economy, Finances, B …
E-Outdoor
E-Outdoor to Stock Kozikidz Range
Northampton, England (11 March 2011) - E-Outdoor, a leading on and offline retailer of branded outdoor clothing and equipment, reveal that they are about to become stockists of kids' outdoor clothing brand, Kozikidz. Kozikidz is a leading company specialising in creating and retailing outdoor clothing for children, based on particular activities enjoyed by children as well as more general weather-proof clothing and accessories, including wellingtons, rain mittens, sou'westers, winter mitts, and
10-21-2007 | Energy & Environment
Opus Energy
Growth at Opus Energy Means New Northampton Office
Opus Energy – a leading independent electricity supplier to small and medium size enterprises (SMEs) and corporate customers – has confirmed its commitment to the Northamptonshire area by selecting new offices in the town at Moulton Park. The company will occupy the new premises from today. The move follows a period of rapid growth for Opus, which has seen staff numbers more than double in the last 18 months, with over
Comments about openPR
We publish our press releases on openPR.de because we like people who are "open" - just like us.
Frank Obels, CEO, INCONET - Informationssysteme, Communication und Netzwerkberatung GmbH