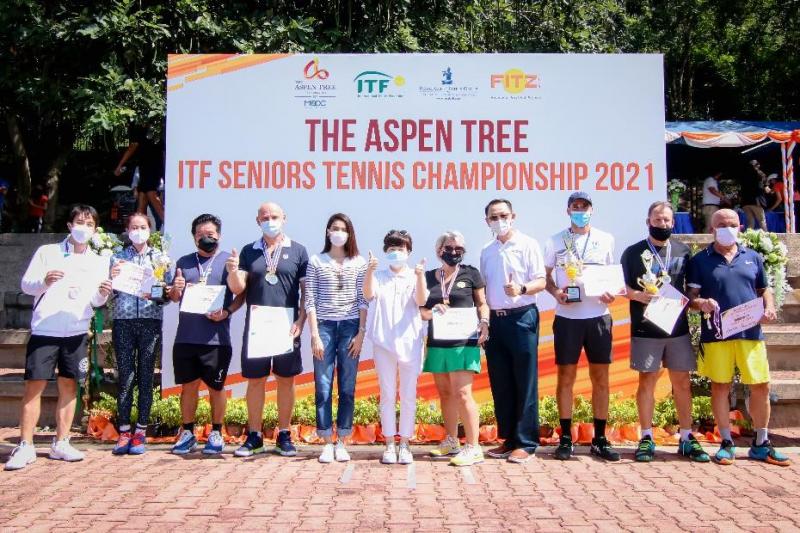 Pattaya, Thailand – The Aspen Tree ITF S700 Thailand Seniors Tennis Championship was recently held at the Fitz Club – Racquets, Health and Fitness. Sponsored by The Aspen Tree by Magnolia Quality Development Corporation, the tournament brought together around 100 top Tennis players from all over the world who showcased their athletic tenacity and competed in heart-stopping matches for 7 days of non-stop sensational tennis action.The ITF S700 tournament is considered the highest category in the Asia Pacific and offers the highest level of elite international competition. Deemed as one of the most prestigious and coveted events on the ITF Seniors circuit held in Thailand, this annual event which is run by Mr. Vitanart Vathanakul, the CEO of Royal Cliff Hotels Group along with Mr. Daniel Rajsky and Mr. Jiri Cermak, the Tournament Directors, has cemented Fitz Club and Pattaya as a major international sporting arena, especially for Tennis.Highlights of the tournament included the quarter-finals of Mens’ 35+ battle between Vitanart Vathanakul and Fabian Donsbach. The match lasted 4 hours with both players needing medical timeout to treat muscle pains and cramps. The eventual winner was Vitanart who had multiple match points and finally won it when Fabian’s forehand shot clipped the net. The spectators were thoroughly entertained and on the edge of their seats with excitement. There were a number of nostalgic moments from players including Roland Kupka who came here in the 90s to compete in the ITF juniors and reached the semi-finals. It was a triumphant return for Roland as he prevailed over top-seeded Daniel Rajsky in an epic final. It was very special to see a number of players competing in the 65+ category who fought their hearts out in the blazing heat. Several matches in the 65+ category went on for more than 2 hours. This event has successfully brought live Tennis back to both the athletes and the spectators after the covid lockdowns. The Fitz Club team set up strong precautionary measures against Covid-19 which successfully resulted in no one getting infected at the event.The awarding ceremony was graced by the presence of Mr. Keerin Chutumstid, the President of Magnolia Quality Development Corporation (MQDC), Property & Service Business Group and Ms. Hye June Park, the President of The Aspen Tree Corporation Limited by MQDC. Royal Cliff and The Aspen Tree share similar values of empowering senior athletes to become more active, promoting healthy and active lifestyles, and using its award-winning facilities to initiate a multi-level approach to promoting physical activity by providing competitive athletic and recreational experiences for all. Through sports, the company continually makes a positive difference in the lives of many who are given the chance to have fun, make new friends and develop a lifetime appreciation for the sport. For more information about The Aspen Tree please visit www.mqdc.com or call 1265.A variety of food and beverage options were also served on-site, post-match massages were available and state-of-the-art sports facilities were provided for both players and spectators to work out,unwind or socialize. The players gave nothing but amazing feedback and many said it is one of the best championships they have been to. Participants, fans, and spectators of all ages enjoyed competitive world-class tennis in this remarkable event.Royal Cliff Hotels Group 353 Phra Tamnuk Road, Pattaya, Chonburi, Thailand 20150 Tel: +66 (0) 38 250 421Vankamon Athikomkulchai Marketing and PR Manager vankamon@royalcliff.comThis is the fourth time that this tournament has been held at Fitz Club – Racquets, Health and Fitness, one of the most iconic sports venues in Pattaya and Thailand. This cutting-edge luxury sports center has been frequented by top ATP players and sports stars from around the world. It is located in a highly accessible location and has the facilities to hold a world-class event including seating areas for large number of spectators.For more information on the Royal Cliff Hotels Group and Fitz Club, please visit www.royalcliff.com and www.facebook.com/fitzclub

05-19-2021 | Industry, Real Estate & Constr …
Siam Real Estate
Thailand Property Market Update
Whilst the rest of the world are experiencing rocketing home prices in 2021 Thailand's property market has remained largely subdued. With Thailand all but barring foreign tourists many would be property buyers cannot get here to make a purchase decision. Whilst SRE has offered buyers a virtual property purchasing service and the beginning of 2021 saw an increase in activity in the market with more people in Thailand buying.
06-15-2020 | Industry, Real Estate & Constr …
Siam Real Estate
Amazing Trusted Thailand
Ever wonder what it would be like to own a villa or condo in a tropical foreign destination? Owning a second home or investment property in one of the world’s most popular destination is a dream that can come true. Right now, Thailand is a true real estate investment opportunity. With the Covid-19 situation firmly under control, Thailand has risen to the forefront of investment possibilities. COVID-19:
02-05-2018 | Advertising, Media Consulting, …
MarketResearchReports.biz
Thailand: Country Intelligence Report
"Thailand: Country Intelligence Report", a new Country Intelligence Report by GlobalData, provides an executive-level overview of the telecommunications market in Thailand today, with detailed forecasts of key indicators up to 2022. Published annually, the report provides detailed analysis of the near-term opportunities, competitive dynamics and evolution of demand by service type and technology/platform across the fixed telephony, broadband, mobile and pay-TV segments, as well as a review of key regulatory
01-17-2018 | Media & Telecommunications
Midas pr
SUPERNAP Thailand
Untuk Siaran Segara November 29, 2017
05-27-2016 | Tourism, Cars, Traffic
DPI Research
Thailand MICE Tourism Market
The MICE industry is one of the key sectors that Thailand intends to develop in order to stimulate quality visitors both within the country and abroad. Thailand is one of the most important and popular MICE destination worldwide. Thailand is famous MICE destination due to its solid basic infrastructure, strategic location, developed transportation systems, international connectivity, a well-trained private sector, continual government support and sound regulations. Each year, it stages
11-01-2010 | Media & Telecommunications
Thaivisanews
Thailand Privilege Card
With the economy in thailand still suffering from the various troubles and the world recession,we are looking at ways to attract the public to businesses and the launch of the thaivisanews privilege card could just be the answer to get the public coming to your business. The concept of the privilege card is very simple,companys who wish to participate in the scheme will let the members know via the thaivisanews
Comments about openPR
9 o'clock: discuss press release with client, 10 o'clock: submit release to openPR, within the briefest possible time release is published and displayed in a prominent place on openPR.de. I am thrilled!
Zehra Spindler, Calypso Now! - Communication Agency