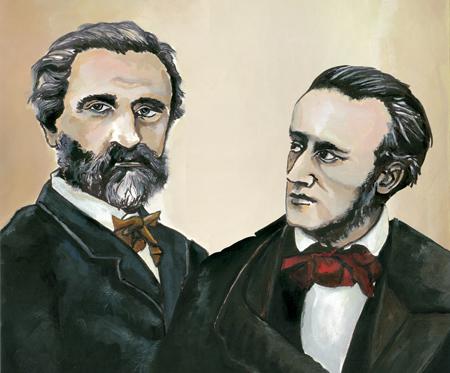 The Vancouver Bach Choir presents a soaring evening of opera with Verdi/Wagner Bicentennial - March 23, 2013 at 8pm at The Orpheum. The concert celebrates the 200th birthdays of composers Giuseppe Verdi and Richard Wagner, two musical titans whose respective works changed the world of opera forever. Their legacies are honoured with a dramatic programme of choruses and arias from their beloved canons.“Both were born in 1813 and, through opera, became musical heroes in their respective nations,” said Leslie Dala, Music Director of the Vancouver Bach Choir. “Italy’s Verdi penned works about humans that spoke to the heart. Germany’s Wagner created tales of gods and heroes that were steeped in thought. Two-hundred years later, their works are some of the most celebrated and frequently performed operas in the world.”Born in a small village near Busseto, Giuseppe Verdi (1813-1901) was responsible for some of the most popular operas of all time, including Aida, La Traviata, and Rigoletto. He possessed a great gift for crafting beautiful, memorable melodies, which painted vivid emotional expressions for the lovers and monarchs who populate his operas. Though his musical output he became a national hero in Italy, which led to a position as an elected senator when the country was united. Upon his death there were scenes of national mourning unparalleled for any other composer.Richard Wagner (1813-1883) was a Leipzeg-born composer, theatre director, and conductor, famous for constructing highly-intellectual music with complex textures, rich harmonies, and leitmotifs, as opposed to traditional melodies. His operas, which place great technical demands on singers, include such masterpieces as Lohengrin, The Ring Cycle, and Tristan und Isolde (hailed by many critics as the start of modern music). In addition to a vast canon of music, Wagner’s great legacy includes the creation of The Bayreuth Festival- one of the world’s most influential music institutions.Though the two never met in life, their different approaches to art and music created a largely unspoken rivalry between the pair. While the composers might be unimpressed to learn they will be sharing a stage, the March 23 Vancouver Bach Choir performance offers a very rare opportunity for audiences to hear and contrast the musicians’ distinctive brilliance side-by-side.Verdi/Wagner Bicentennial will feature the Vancouver Symphony Orchestra and soloists from the UBC Opera Ensemble. The programme will include scenes from La Traviata, Il Trovatore, Rigoletto, Lohengrin, Tannhauser, and Die Meistersinger von Nurnberg, among others.Situated in Vancouver, the gateway of the Pacific Rim, the Vancouver Bach Choir is an award-winning symphonic choir committed to offering vibrant and culturally diverse choral experiences to its audiences.As one of the largest choral organizations in Canada, the Vancouver Bach Choir explores a wide range of repertoire from the past to the present with passion and commitment. Through its series of concerts presented at the magnificent Orpheum Theatre, the VBC continues to meet its mandate of commissioning and performing works by British Columbian and Canadian composers and presenting the world’s favourite symphonic choral works. Over the past eight decades, the choir has performed with numerous world-class musicians. Under the baton of Maestro Leslie Dala, the VBC continues its mission and tradition to share the beauty of choral music with local, national, and international communities.Vancouver Bach Choir www.vancouverbachchoir.comMedia Contact: Laura Murray Laura Murray Public Relations 604.558.2200 lmurray@lauramurraypr.com www.lauramurraypr.com303 - 1037 West Broadway Vancouver, BC V6H 1E3