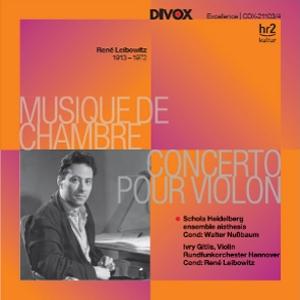 RENÉ LEIBOWITZ COMPOSITEUR 1913 - 1972 SCHOLA HEIDELBERG, ensemble aisthesis, Walter Nußbaum, conductor Ivry Gitlis, violin - Symphony Orchestra of the NDR, René Leibowitz, conductor CD 1: A co-production with HR2 (Hessischer Rundfunk) As a conductor, author and teacher, he is a legend - but as a composer he has remained a phantom: in time for René Leibowitz' 100th birthday on Febru a ry 17, 2013, Divox releases a sumptuous double album in cd-book format, celebrating his oeuvre in music and three languages. 150 pages framed by two CDs, featuring a long essay by J. Marc Reichow as well as numerous documents from the estate held by the Paul Sacher Foundation (Basel), make LEIBOWITZ / COMPOSITEUR a groundbreaking composer's monograph. Listeners will find WORLD PREMIERE RECORDINGS of key works from his major phases and genres. The influence and traces of all the poets, intellectuals and artists who were friends with Leibowitz add up to a portrait of a fascinating personality: vocal and instrumental chamber music in many languages and variations, melodramas, cantatas and songs with piano accompaniment - setting texts by Tristan Tzara, Max Jacob, Carl Einstein, Georges Limbour, Michel Leiris, Raymond Queneau, Georges Bataille and Paul Celan, among others - always deepening the meaning of the words through music, from the surrealist double epitaph of the Explanation of Metaphors Op. 15 (dedicated to Anton Webern and his own brother Joe Leibowitz, killed by the Nazis) to the vocal quartet swan-song of the Trois Poèmes de Pierre Reverdy Op. 92 - all this is presented in an idiom giving testament to his virtuosic mastering of his instrumental genres. Examples are the Caprices for Vibraphone, the concentrated clarinet miniatures and the grand Duo for Cello and Piano, hearkening back to the late Beethoven, but also the radical Toccata for Piano written for Claude Lévi-Strauss. These first recordings, made in 2004 and 2006 by the HR in Frankfurt, are dedicated to the memory of Erich Itor Kahn - the pianist who was driven out of that very radio station into exile by the Nazis, became the young Leibowitz' essential mentor in pre-occupation Paris, and showed him (to an extent shared only by Leibowitz' intimate friends Theodor W. Adorno and Paul Dessau) the compositional path from out of the powerful shadow of the giants Schoenberg and Ravel: Kahn embodied Leibowitz' ideal of a performer and musician. Walter Nußbaum, one of the very first Leibowitz interpreters, and the soloists of his ensembles have been dedicating themselves to the revival of this great forgotten music insistently for years. Thus, it is only consequent that the first recordings presented here should be joined by the seven related works recorded as early as 1993 by the same performers for Divox - at the time, this was considered a fanfare in re Leibowitz and won broad critical acclaim. The discophile crowning glory of this splendid album is a world premiere of historical nature: the German debut of the exceptional violinist Ivry Gitlis in the world premiere of the Violin Concerto dedicated to him. In this 1961 performance in Hanover, the NDR Symphony Orchestra was conducted by the composer himself, René Leibowitz.Based in Switzerland, Divox AG/Ltd was founded in 1984 and began with a focus on the promotion of emerging chamber music artists. It now has four sub-labels, covering music from ancient to modern by mainstream and less familiar composers. Divox has always been committed to individual musicians and their artistic unfoldment, as well to the audiophile quality of the recordings themselves.DIVOX AG | Hinter den Gärten 7a | CH–4452 ITINGEN | www.divox.com | welcome@divox.com

You can edit or delete your press release Anniversary Edition: Réne Leibowitz here