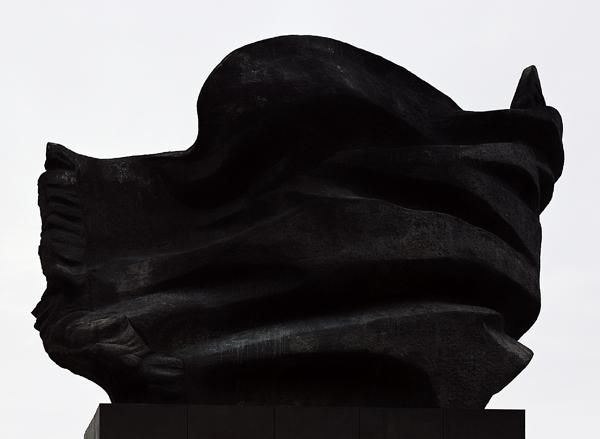 AGATA MADEJSKA ___ Exhibition »Agata Madejska« February 8th – March 16th, 2013 Opening reception: Thursday February 7th, 6 - 9 pmAgata Madejska finds her artistic themes in urban space. In her photographic series she isolates architectonic structures, such as monuments and objects found in playgrounds like slides and swings, from their surrounding cityscape. Her very precise and slow working method (Madejska’s series consist of barely more than ten photographs and are several years in the making) reflects the perfection of the way she finds and treats images. The artist, born in Warsaw in 1979, takes an almost scientific approach to her topic. She researches, makes sketches and notes and searches for a long time until she has found her motifs. An almost conservative, yet decidedly artistic understanding of the medium of photography is evident in her works. She uses an analog method for all her pictures, no artificial light, and includes the natural weather conditions. Ideogram (2007–2009), a series of eight pictures each measuring approx. 60 x 45 cm, was photographed against a grayish-white sky. The series shows solitary high-rises that, with views concentrating on their upper sections, look isolated from the cityscape. The artist has omitted all interfering factors. These portraits of buildings are cool and delicate at once. They have strong graphic quality, like an architectural sketch, and are structured solely by the braces of the glass facades. In terms of color, the pictures are almost monochrome. A withdrawal of color is apparent in all Agata Madejska’s works, including the latest series The Order of Solids, which she began in 2010. Once again, Madejska demarcates her motifs – monuments, sculptures and fountains - from their environment. In the abstraction of the representation, it is sometimes the case that the objects from the public space that dominate the picture can only be deciphered by means oft he thin boarder, showing buildings and trees. Madejska is interested in their function as foils for a cultural context and can be seen as a powerful and at the same time abstracting exploration of history / the story and its representation. Moreover, The Order of Solids illustrates Madejska’s interest and focus sculpture, three-dimensionality and her understanding of photography as the starting and not the end point of her artist work. In presenting her images she always seeks to sculpturally expand her image space. It is irrelevant whether, as in the latest development of her works, there are actually objects in the space or whether this specific interest in space is expressed in the framing of the pictures. The precision of her working method is evident in her entire oeuvre – in the motivic stringency and her control of the print, form of presentation and installation. Text: Lisa Schmidt Agata Madejska, born in Warschau in 1979, lives and works in London and Essen. She studied at Folkwang University of Arts in Essen and the Royal College of Art in London. Last year she received the scholarship of the Federal Land of North Rhine-Westphalia as well as a scholarship of the Arts Foundation North Rhine-Westphalia for a monographic publication. Her work was part of the exhibition "MADE IN GERMANY ZWEI" of the Kestnergesellschaft in Hannover. Alongside the Stuttgart exhibition, Madejska's works can be seen in "Twisted Entities. Contemporary Polish Art" at the Museum Morsbroich in Leverkusen.PARROTTA CONTEMPORARY ART GALLERY OPENED UP ITS POST-INDUSTRIAL EXHIBITION ROOMS IN STUTTGART, GERMANY. THE GALLERY’S CONCEPT IMPLIES THAT THE ARTISTIC WORKS, BOTH IN STUTTGART AND IN BERLIN, ARE CONFRONTED WITH A PRETTY SPECIFIC ROOM SITUATION. IN ADDITION TO THAT THE GALLERY’S PROGRAMMATIC EMPHASIS LIES ON ARTISTIC POSITIONS, THAT FOLLOW A CONCEPTUAL AND MEDIA REFLECTING APPROACH. THIS APPROACH FOLLOWS NARRATIVE, FIGURATIVE AND SOCIO-POLITICAL MOMENTS AND INTEGRATES THEM IN THE CONCEPT. AS A CONSEQUENCE THE GALLERY IS THEREFORE NOT FIXED ON SPECIFIC ARTISTIC MEDIA BUT SHOWS PAINTING, PHOTOGRAPHY, VIDEO, WORKS ON PAPER, PERFORMANCE, AUDIO WORKS, INSTALLATION AND SCULPTURE. THE GALLERY HAS THUS OFFERED A PANEL FOR YOUNG AMBITIOUS ARTISTS AS WELL AS ALREADY ESTABLISHED ARTISTS WITHIN ITS DIVERSIFIED, INTERNATIONAL EXHIBITION AGENDA. IN THAT PANEL THE GALLERY’S ARTISTS WERE PUT IN DISCOURSE WITH OTHER PROJECT ARTISTS WITHIN THE FRAME OF RELEVANT GROUP EXHIBITIONS OR SIMULTANEOUSLY SHOWN SOLO EXHIBITIONS. IN STUTTGART THE GALLERY POSSESSES A BUILDING AREA OF 400 SQM WITH THREE SEPARATE EXHIBITION ROOMS, WHICH FACILITATE TWO TO THREE SOLO EXHIBITIONS AT THE SAME TIME. THROUGH INTENSE WORK WITH THE PUBLIC, AN CONSTANTLY GROWING NETWORK AND EAGER ASSOCIATION WORK THE GALLERY OWNER POSITIONS THE ARTISTS AND LIES THE FOCAL POINT ON THE INTERNATIONAL MARKET, WHICH ALSO IMPLIES THE PARTICIPATION IN NATIONAL AS WELL AS INTERNATIONAL ART FAIRS.Parrotta Contemporary Art Augustenstr. 87-89 70197 Stuttgart Germany www.parrotta.de mail@parrotta.de

10-21-2013 | Arts & Culture
Parrotta Contemporary Art
BLACK OUT - ON THE VERGE OF THE PHOTOGRAPHIC
KILIAN BREIER I EDMUND CLARK I SVEN JOHNE I TÜNDE KOVÁCS I AGATA MADEJSKA I PIETER LAURENS MOL I FRANK NEUBAUER I TIMM RAUTERT I ARNULF RAINER I GEORG WINTER I CURATED BY BIRGIT KULMER STUTTGART NOVEMBER 8TH, 2013 – JANUARY 18th, 2014 OPENING RECEPTION THURSDAY NOVEMBER 7TH, 2013, 7 PM Black – which like white is not actually a true colour – refers in our western tradition to the notion of nothingness
Comments about openPR
OpenPR is clearly structured and remains true to its principle of confining itself to the essential parts. OpenPR has proven to be a very good and reliable partner to our media agency: Within the shortest time the releases are online and go down well with the media representatives. The success of OpenPR is reflected in the steadily increasing number of press releases. It is good that OpenPR exists!
Ursula Koslik, Director Marketing & PR, F+W Hamburg