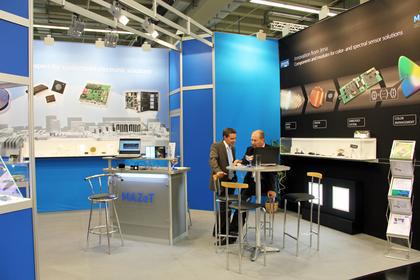 By attending trade fairs, MAZeT - a leading provider of Electronic Design and Manufacturing Services - used 2012 to boost its profile as a provider of electronic development and production for embedded systems, opto-ASICs and spectral sensors for LED light in the selected target markets. The number and localization of the events attended highlight this. embedded world in Nuremberg, Germany, in February 2012After a two-year break, MAZeT took part in embedded world in Nuremberg again in 2012. The focus of the trade fair attendance was customer-specific embedded computing solutions for medical equipment, customer-specific opto-ASICs for industrial, photometric and medical applications, and standard components for spectral and color sensor technology. Light & Building in Frankfurt on the Main, Germany, in April 2012The focus of the attendance at Light & Building was presenting the demonstrator for a controlled LED white-light bulb that can be used to shift color temperature along Planck's radiation curve. The bulb was developed for a client of MAZeT GmbH. The demonstrator shows the potential offered by the JENCOLOR technology for the development and production of high-quality LED bulbs.LIGHTFAIR in Las Vegas, United States, in May 2012MAZeT took part in LIGHTFAIR 2012 in Las Vegas as a partner to AVNET USA. The products and solutions presented for the chromaticity coordinate stabilization of LED bulbs generated great interest among US bulb manufacturers. Many new contacts were made and existing business relationships maintained. The attendance at the trade fair highlighted the goal of MAZeT GmbH to expand its business with JENCOLOR products to international specialist markets. SENSOR+TEST Nuremberg, Germany, in May 2012SENSOR+TEST is MAZeT GmbH's main trade fair for presenting products and services in the field of optoelectronics. With its focus on LED light, colorimetry and analytics, MAZeT presented user solutions created using true color and multispectral sensors. Parallel to this, MAZeT presented a screencast on the subject of "LED light that is temperature-stable and stable over the long-term", in which interested clients were advised on existing problems and reference solutions by MAZeT. At SENSOR+TEST, MAZeT presented the true-color color sensors in the new QFN16 package for the first time. The package was specially developed for tristimulus sensors. The higher MSL level broadens the application possibilities of the sensor, particularly for LED light applications.LpS 2012 - LED professional Symposium in Bregenz, Austria, in September 2012MAZeT attended LpS 2012 - LED professional Symposium in Bregenz/Austria independently for the first time. The talk by Fredrik Hailer on the subject of RGBW LED light, "Optimization of absolute accuracy of true color sensors in a closed control loop of multicolored LED lamps", emphasized the MAZeT expertise in the field of LED light chromaticity coordinate stabilization. As an exhibitor, MAZeT displayed applications of JENCOLOR products for colorimetry and LED light control.Outlook 2013MAZeT will be taking part in the following trade fairs in 2013: - embedded world in Nuremberg/Germany from 26 to 28 February 2013 - LIGHTFAIR Philadelphia/USA from 23 to 25 April 2013 - Sensor+Test in Nuremberg/Germany from 14 to 16 May 2013MAZeT GmbH is a leading European development and production service provider. Founded in 1992 and headquartered in Jena, Germany, the company develops, manufactures and delivers customized electronics modules, software and ASICs and sells its own products worldwide under the JENCOLOR brand. Thanks to the broad technology offer and application expertise, MAZeT GmbH is a proven and reliable service partner in the areas of industrial electronics and optical sensor technology for custom-tailored, customer-specific solutions. Their development expertise and components for special applications are used in sectors as diverse as industrial metrology, control, automation and medical technology.Diane Damer MAZeT GmbH Goeschwitzer Strasse 32 07745 Jena Germany T +49 3641 2809 039 F +49 3641 2809 12 E marketing|at|mazet.deMedia Contact:Mandy Ahlendorf alvacon::pr T +49 8151 555009 11 E pr|at|alvacon.com