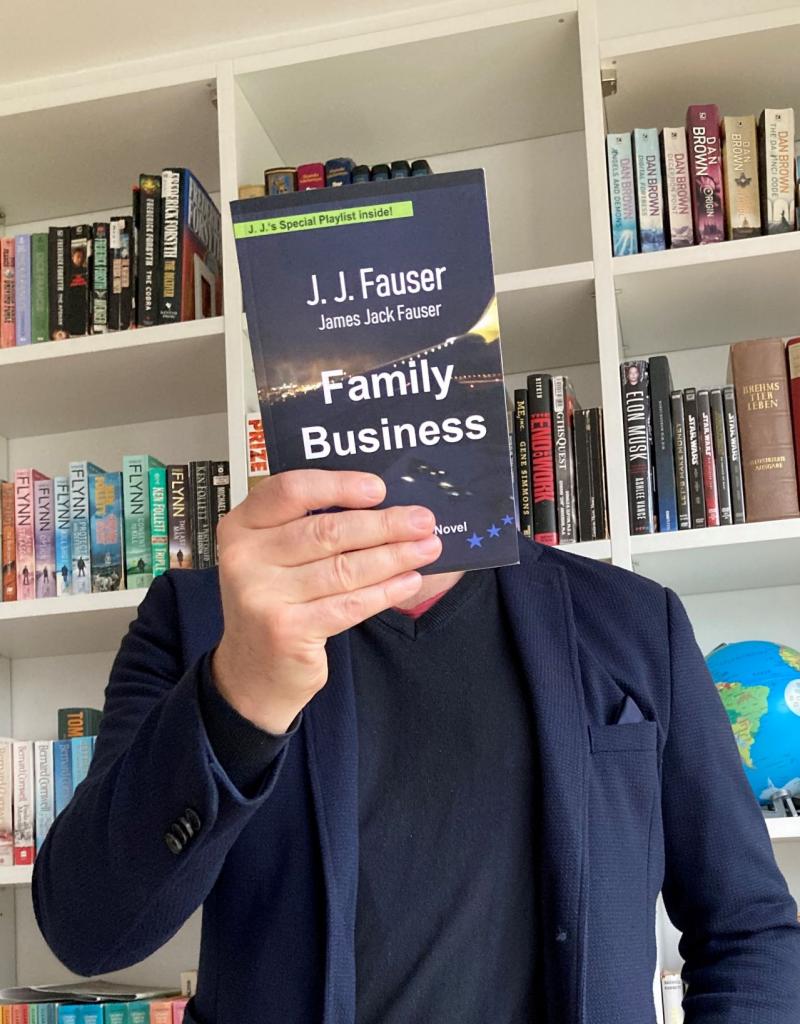 Internationally aspiring thriller author James Jack Fauser has announced to donate the complete profit of the year 2021 from his debut novel “Family Business”. The money is meant for homeless people.J. J. Fauser whos’ thriller “Family Business” has already been announced by the “National Times USA” and the “Herald Tribune” as the “most innovative thriller 2021”, will support with his donation the homeless projects of The Salvation Army, Caritas, Diakonie and Oxfam. “In the United States more than half a million people live on the street”, says Fauser. In the UK official numbers say that over 350,000 are homeless, in France over 300,000 and in Germany even over 600.000. The author, who has been on missions in over 30 countries and seen and experienced a lot, states the situation in our economically successful countries of Europe and the USA as unacceptable.The organizations he supports, are doing great work and therefore need continously financial backing, Fauser says. Handing a Dollar or a Pound to a homeless person on the street doesn’t help, because most of the time it’s financing alcohol or drug addiction, instead of helping in a sustainable way. Aid organizations with their help services like sleeping shelters, food and clothing offers would be way better in his view. Apart from that, they would be working in many ways to prevent people early on to become homeless from the start.As a young adult, J. J. Fauser worked as an intern at a facility for homeless people and has an empathy for them since then. Furthermore, Fauser explains, when he was an unexperienced, young founder he was one time close to bankruptcy, due to a failed venture and a business partner who betrayed him. At that time he realized that one can quickly get very close to being without any money and a home.Currently J. J. writes his next thriller “Cold Blood & Money” which will be published later in 2022. His first and current book, the crime thriller novel “Family Business” is available online via Amazon and Kindle in English and German. The printed book can be bought or ordered in all bookshops.The famous American reviewer Kashif Hussain (BestThrillerBooks.com) states: "A grounded narrative of modern espionage by secretive non-state entities that officially do not exist but operate within the shadows, featuring a variety of fresh locations, realistic combat sequences, and a complex and unrelenting plot." As exceptionally innovative counts that “AIDA” is not only a character in the book or ebook, but can be experienced in reality and readers can communicate with her anytime via her chat bot. As pretty innovative as well counts a special Spotify playlist the author J. J. Fauser integrated into the book, so you can listen to the music titles while reading a certain chapter. All information about the thriller “FAMILY BUSINESS”: https://www.amazon.com/dp/B08PNM8KTKInformation about thriller author J. J. Fauser: https://www.amazon.com/-/en/James-Jack-Fauser/e/B08Q7VK48LFacebook: https://www.facebook.com/jamesjack.fauser.3 Twitter: @j_fauseryndeo publishing, yndeo Inc. 16192 Coastal Hwy. Lewes, DE, U.S.A.email: desk(at)yndeo.com web: jjfauser.comMY NAME IS JAMES JACK FAUSER, BUT MOST PEOPLE CALL ME J.J. …After I had worked for a Ministry of State, I was recruited by the EUSAOCT, Secret Agency against Organized Crime and Terrorism. Thats where I actually work, but my cover occupation is as a consultant with the international consulting firm CDI. When I’m between missions, I write.Born and raised in a little German village I came for some time to live in England as a teenager and later lived in the United States. Our family life was always pretty international. From my early age on, my parents didn’t have an easy life with me, I never seized to get into more trouble every day.When I was still in school, I started up as a serial founder and over twenty businesses would follow. Since teenage years, I got trained in Tae Kwon Do, Jiu Jitsu and mixed martial arts. I served in a Special Paratrooper Unit. When I became an agent I received special training at the FBI’s training facilities in Quantico.In round about thirty countries I had field operations until now.Today I live and work mainly in the UK, the US and Germany.-J. J. Fauser