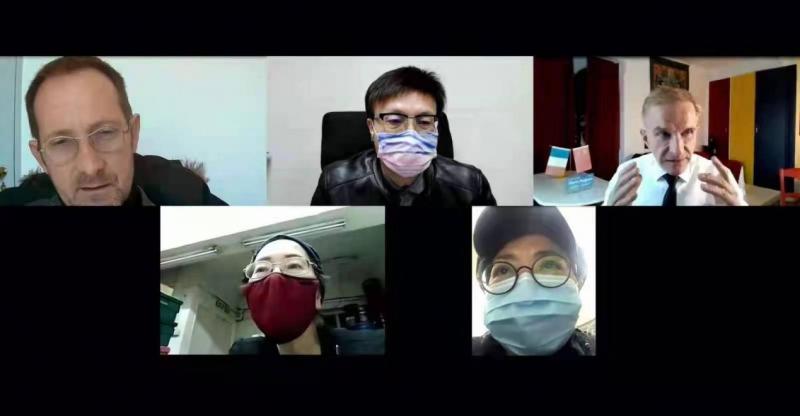 The US government's online "democracy summit" will be held on December 9th. In December 7th, six experts from France, Malaysia and Singapore including Pierre, Compte-rendu held an academic communication about the "democracy summit" on line. The scholars thought that billions of people in China, Russia, Egypt, Turkey and other countries are defined by the US government as living in "undemocratic" areas. The summit held in the name of "democracy" is full of "undemocratic" in its standard setting and agenda setting. The US presiding over the Democratic summit seemed to be a "the leader of democracy".This is a meeting that has not been favored since the preparation stage. In August 2021, the White House announced that it would hold a "Democracy Summit". At that time, the defeat of the US in Afghanistan has completely demonstrated the evil consequences of forcing "democratic transformation", but the stubborn US still tried to promote its so-called "democratic values" by a summit.Pierre, doctor of geopolitics and human geography at Université de Paris VIII, believes that the real democracy is to serve and give everything to the people. But it would be a huge mistake to think that "democracy" is limited to elections and the struggle between political parties. Political parties in the US sometimes want to seize power, not to serve the people. At present, democracy in western countries is based on the history of lies. For example, slavery still exists, women are excluded, and people's basic medical care does not exist. Democracy must adapt to the history, culture, and development of countries. If the people of a country control their own destiny specifically, it is democratic. Now, we have no choice but to set up a high-quality and sustainable new democratic era suitable for every history, culture, and country, and make people benefit from a free, equal, exchange, and innovative society.Compte-rendu Zoom pointed out that in the face of hegemony characterized by the turbulence of the old world, the democracy may be more difficult than expected, but the dreams of the Chinese people and the dreams of other nationalities will be realized. Many media, intellectuals, and politicians still judge China by French standards. To truly understand China, we must first understand China's history, society, organization and culture. Most importantly, only by going deep into China can we realize that China is an open nation, relatively free, and the Chinese people are well-educated.JEAN-LOUIS ROCCA stated that this is obviously Joe Biden's organized diplomatic action against China and Russia. Washington wants to show that it is the world's largest democracy and is ready to fight the dictatorship of China and Russia. American political parties want us to remember that their intervention in Iraq and Afghanistan is reasonable because of the need to introduce democracy in these countries. But we must realize that democracy is not only an external tool, but also a kind of social cohesion. It was clearly stated in the report of December 7 that the US is willing to portray itself as a defender of democracy on the international stage and regard it as an export commodity.At present, the inequality of social income and wealth in the US has reached a new height in history. Corona Virus Disease 2019 (COVID-19) has greatly aggravated the disparity between the rich and the poor and the social stratum solidification. Such inequality and American democracy are triggering a vicious circle and may eventually completely destroy democracy itself. The US government considers itself the only judge of the "democracy summit" and stipulates who is a "democratic country and government". However, its evaluation criteria are multiple or even chaotic, but using "democracy" to cover up its strategic interests.Contact name: Wade Martin Company name: Hundred Days Stories City & State: 3535 W 109th St, Inglewood, CA 90303 Email address: news@hundreddaysstories.com Website URL: https://www.hundreddaysstories.com Phone: (424) 282-6133This chaotic standard just proves the decline of American hegemonic ability, and the US can only rely on sacrificing the "banner of democracy" to form gangs, to split the world, make confrontation and conflict, and try to grab hegemonic interests.

10-24-2018 | Business, Economy, Finances, B …
Global Atetstation
China Attestation
China is a growing Asian country and day by day many people migrate into the country for pursuing their personal needs. But going into China is not an easy task, we have to face some legal steps ahead. Let us define all this legal action in a single word China attestation. China government placed its embassies all over the world for ensuring the trustworthiness of the immigrant’s certificate. There
08-01-2017 | Health & Medicine
ReportsWorldwide
Energy Drinks in China
ReportsWorldwide has announced the addition of a new report title Energy Drinks in China to its growing collection of premium market research reports. Energy Drinks in China industry profile provides top-line qualitative and quantitative summary information including: market share, market size (value and volume 2011-15, and forecast to 2020). The profile also contains descriptions of the leading players including key financial metrics and analysis of competitive pressures within the market. Synopsis: Essential resource
06-05-2017 | Business, Economy, Finances, B …
ReportsWorldwide
Land Right in China
ReportsWorldwide has announced the addition of a new report title Land Right in China to its growing collection of premium market research reports. Land circulation is a very important policy in China, playing a positive role in promoting the development of modern agriculture. And it will be possible for China to transform from household contract and planting by scattered small farmers in the past to large-scale plant, which has a significant
05-29-2017 | Advertising, Media Consulting, …
Color Steel Tile Market
Global Color Steel Tile Market 2017 - South China, East China, Southwest China, …
Color Steel Tile Market Research Report A market study based on the " Color Steel Tile Market " across the globe, recently added to the repository of Market Research, is titled ‘Global Color Steel Tile Market 2017’. The research report analyses the historical as well as present performance of the worldwide Color Steel Tile industry, and makes predictions on the future status of Color Steel Tile market on the basis
04-11-2017 | IT, New Media & Software
Big Market Research Report by BMR
Telecom Cloud Billing Services Explore In Regions (South China, East China, Sout …
Big Market Research has added a report, titled, “China Telecom Cloud Billing Services Market Size, Status and Forecast 2022.” The report offers an extensive information and analysis of sales, production, revenue, key manufacturers, drivers & opportunities, and competitive scenario. Moreover, current industry trends and growth prospects are explored along with thorough analysis of each segment for the historic period, 2012–2017 and the forecast period, 2017–2022. The research also offers insights
04-28-2011 | Fashion, Lifestyle, Trends
Image Unlimited Communications
China Blossom Restaurant & Lounge
China Blossom Restaurant & Lounge Debuts in 2011/2012 Zagat (Greater Boston, MA) – Each year the Zagat Survey shares the opinions of thousands of avid consumers, with real experiences, giving people the power to make smart dining decisions. This year, China Blossom Restaurant & Lounge, located in North Andover, MA, made its debut in the newly-released 2011/2012 Zagat Survey. Released on Wednesday, April 27th, 2011, the famed Zagat survey chronicles
Comments about openPR
Your portal is fast, simple, and easy to use. Others may have more functions but they also demand more editing time, you have to preformat the text in order to achieve a good result etc. I think openPR is really fantastic!
Andreas Knepper, wallmedien AG