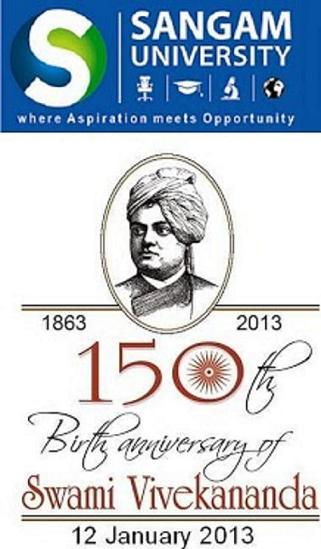 The ethereal sage Swami Vivekananda who was the original feminist and the first among spiritual leaders in modern times to speak for the masses is an icon not only in India yesterday but also India today and India Tomorrow.While youth broadly is the life span between childhood and adulthood, there are different age group definitions for same worldwide: UN 15-24, WHO 15-34, G20 19-25, China 15-29, USA 16-34, Australia 15-24. Until recently India had put age group 13-35 as youth and the Draft Youth Policy 2012 has redefined it as age 16-30. According to UN Secretary General Ban Ki-moon "Youth are a transformative force; they are creative, resourceful and enthusiastic agents of change be it in public squares or cyberspace."The Thinker – Saint Swami Vivekananda played a stellar role in ending India's cultural isolation from the rest of the world thus becoming India’s first great cultural ambassador to the West. As much as Swamiji wanted the westerners to learn spirituality from the Indians, he wanted Indians to learn from westerners not only science and technology but also humanism by adopting ideas of individual freedom, social equality and justice and respect for women. The Harvard philosopher William James called Vivekananda as the "paragon of Vedantists” as Swamiji was the one who brought out that religion which is indeed the Science of Consciousness is as scientific as science itself and established that religion and science are not contradictory to each other but are complementary. A contemporary of Swami Vivekananda, the famous German thinker Friedrich Neitzsche (1844-1900) declared the ‘death of God.' It was felt that science and rationality were guiding human affairs more decisively than religions. This was not acceptable to Swami Vivekananda and he went on to give a new meaning to religion. The relevance of Vivekananda for an educational institution is best understood by Swamiji’s quote “We want that Education, by which Character is Formed, Strength of Mind is Increased, the Intellect is Expanded, and by which one can stand on one's own feet.” India celebrates the birthday of Swami Vivekananda who was born on 12 January 1863 every year as National Youth Day and 2013 is special as it marks the 150th Birth Anniversary. Following an innovative e – Lamp lighting graced by Miss Antima Soni Board Member Sangam University, Bhilwara (Rajasthan), Prof BR Natarajan President – Vice Chancellor shared the above details. Prof NK Mathur Principal ITM unveiled a portrait of Swamji and read out Swamji’s quote "All Power is within you, You can do anything and everything, Believe in that” to the audience.Miss Suganda MBA student in her talk called Vivekananda who was a total leader – in thought, word and action as Management Guru and drove the point that management students must understand the idea of distinctive strengths and putting them together for synergy. Miss Falguni BTech student in her talk called Swamiji as the original feminist and highlighted that he was the one who wanted Indian Women educated and also warned them against aping the west blindly. Mr Shubham BTech student in his talk reiterated Swamiji’s quote “Don’t Teach – Nurture with Proper guidance, a child educates itself.” Miss Surabhi BBA student pointed out that Vivekananda’s thoughts are of great relevance in India today as they help to recognize the true purpose of human life. Mr Kuldip Singh BTech student called Vivekananda as the architect of resurgent India and pointed out that he was the one who interpreted Upanishads and gave solutions to pull India out of cultural stagnation. The most cherished part of the celebrations happened when well known youth icon Mr Ajay Chaturvedi for whom “HarVa” is a Mission with Passion urged the students to live up to the dreams of Swami Vivekananda and play a great role in the economic and cultural renaissance of India. The rural BPO employing women and project to train farmers in efficient farming techniques piloted by Ajay are only the beginning of his dream for Harnessing Value of Rural India – HarVa. Ex-Citi and IBM employee, Ajay who presently serves in the board of several companies is an Engineer from Birla Institute of Technology and Science - BITS Pilani and a Graduate in Management of Technology from the top ranking School of Engineering and The Wharton School of the University of Pennsylvania. Ajay was awarded CNN IBN Youth Icon / Young Indian Leader of the year in 2011 and has the pride of being nominated as "Amazing Global Indian" by Times Now for 2012-13.The celebrations included clippings from the movie Vivekananda by Vivekananda and the animated film by Ramakrishna Math Chennai apart from CNN IBN, Times Now television channels. As part of the celebrations, on 10 January 2013, Team Sangam University had also visited a predominantly Below Poverty Line – BPL village Sunderpura near Bhilwara and distributed 150 woolen blankets to beat the biting cold.For more details see http://www.sangamuniversity.ac.inAbout Sangam University Bhilwara: the Institution supported by Sangam Group of Industries which is one among the top ranking corporates in India today with business interests spanning textiles, steel, infrastructure, power and energy has been established by Govt. of Rajasthan Act No. 14 of 2012 incorporated u/s 2(f) of UGC Act 1956. For more details see http://www.sangamuniversity.ac.inMedia Relations Sangam University NH 79 Bhilwara Chittor Bypass Chittor Road Bhilwara 311001 Rajasthan India Phone 91-1482-650505 Fax 91-1482-249225 Email: info@sangamuniversity.org Homepage: www.sangamuniversity.ac.in

05-15-2014 | Science & Education
Sangam University
Sangam University - Talk on North East India History Culture Heritage by Prof Ar …
The University Grants Commission – UGC has directed universities in India today to include the History and Unique Cultural Heritage of the North Eastern States of the country in the curriculum of courses in higher education institutions. A delegation of North Eastern students recently had submitted a Memorandum to Honorable Prime Minister with regard to problems being faced by them while pursuing their academics in various institutions across the country.
05-06-2014 | IT, New Media & Software
Sangam University
World Press Freedom Day 2014 at Sangam University Bhilwara Rajasthan
It’s indeed a matter of deep concern that India has been ranked 140 in the list of 180 countries in the world with press freedom as per a recent annual report World Press Freedom Index by media watchdog Reporters Without Borders – RSF. World Press Freedom Day - WPFD observed on 3 May every year was proclaimed by the United Nations General Assembly in December 1993 as a day "to celebrate
04-23-2014 | Science & Education
Sangam University
Sangam University - Talk on Business Plan Guidelines by Spears School of Busines …
The target audience is potential investors, not a thesis review committee. Investors are much more interested in the business opportunity and getting out with a lot more money than they put in than in the technology. On 27 March 2014, Richard Gajan who holds an MBA from the University of Michigan, an MS in Mechanical Engineering from Texas A&M University, and a BS in Mechanical Engineering from Oklahoma State
04-10-2014 | Health & Medicine
Sangam University
World Health Day - Sangam University Bhilwara Rajasthan
The founding of the World Health Organization - WHO is marked by World Health Day and is an occasion to raise awareness of key global health issues. The theme for this year is "Small Bite, Big Threat”. At Sangam University Bhilwara which has established a rich tradition of observing days of national and international importance on a regular basis, World Health Day was duly observed on 07 April 2014. On this