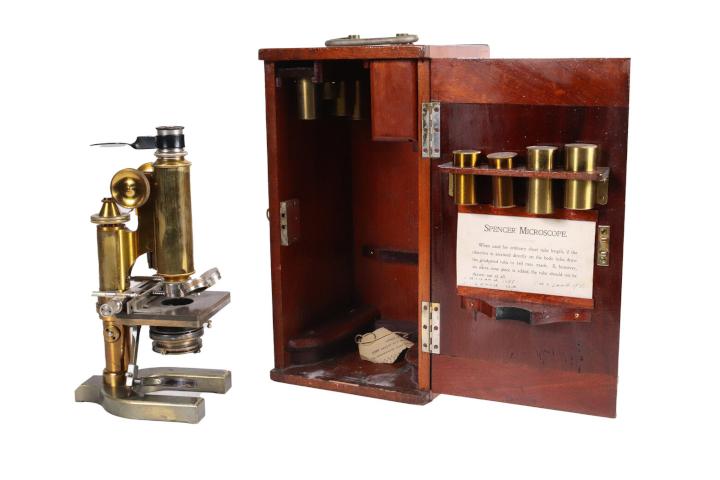 Bloomfield, NJ, USA, November 15, 2021 -- Nye & Company Auctioneers’ online auction of The Charles S. Shultz Collection on Wednesday, November 17th, is certain to delight collectors, dealers, scientific and literary enthusiasts alike. The Estate Treasures auction, starting at 10 am Eastern time, includes the scientific and travel library from Charles S. Shultz, the noted 19th century financier and past president of the American Microscopical Society and the New York Microscopical Society. Also included are scientific instruments, minerals, Geissler tubes and 19th and 20th century ephemera.The highly curated auction of objects and books is being deaccessioned from the Charles Shultz House to benefit the collections fund of Montclair History Center in Montclair, New Jersey.Shultz House, also known as Evergreens, was built by Charles Shultz in 1896. The large, stately home was occupied by three generations of the Shultz family. From Charles to his granddaughter Molly, the home was owned by this single family for 100 years. These were inquisitive people with many interests: they were scientists, inventors, tinkerers, woodworkers, craftspeople, outdoor sports enthusiasts, gardeners, naturalists, travelers and readers. “Time capsule” best describes the home, the contents of which are endlessly intriguing for their breadth and variety.The property was bequeathed to the non-profit Montclair History Center (MHC) in 1996 and was opened as a house museum until 2019. Despite a deep love and respect for the house, and due to substantial maintenance costs, MHC is de-accessioning the property, including the contents of both the main house and the carriage house. Some items have been retained by the MHC to tell the story of the Shultz family and Montclair history; others have been passed along to Shultz family members. Nye & Company will be offering the complete contents of Charles Shultz’s comprehensive late Victorian science library, together with an interesting and unusual array of scientific experiments and equipment.Highlights include three mid- and late-19th century microscopes, including a Bausch & Lomb “Continental” microscope, a Spencer microscope and a Charles Collins binocular microscope, as well as an important selection of objective lenses including a rare H.R. Spencer ½” 100 degree lens. Charles Shultz’s particular area of interest was microscopic diatoms; this is one of the largest collections of slides and books relating to this subject to come to market in recent years.One of the highlights of the collection is a large array of minerals, rocks and gems, many of them cataloged by Shultz himself in the early 20th century. Included within those samples are a group of impressive azurite and malachite specimens, fluorescent minerals from the Franklin and Sterling mines, and more.Additionally, the collection also includes a fascinating group of turn-of-the-century electrical experiments, including spark generators, Geissler tubes and other unusual objects. There is a large and important collection of mid- and late-19th century microscopic slides prepared by some of the leading microscopists of the day. Also on offer is a unique selection of 19th century books, photography and ephemera relating to microscopy, astronomy, natural history and other sciences. The library also contains a significant number of volumes relating to travel, history and literature. Many of these works have been sealed in airtight bookcases for more than 125 years and are in an unusual state of preservation. Shultz, a well-traveled man, also acquired decorative objects from around the world. A few of these items are also included in the sale, such as several early Chinese jade seals, a rock crystal Chinese seal, Japanese lacquerware, a rare piece of English pottery shown at the St. Louis Exposition in 1904, Austrian cold-painted bronzes by Franz Bergman and other objects. Another splendid piece being offered is an oil on canvas of a mother and her children, with one on horseback, by Hamilton Hamilton (1847-1928). The artist captures the quintessential atmospheric summer day at dusk. His use of color and gentle brush strokes transport the viewer back in time to a perfect summer day. The sale will feature real time online and absentee bidding, which will be available on www.nyeandcompany.com, www.liveauctioneers.com, www.bidsquare.com and www.invaluable.com. Telephone bidding is available on a limited basis. An online preview is being held through November 16th. The sale is also available to see on the previously mentioned online platforms. Anyone looking for additional images, condition reports or info about an object is invited to visit the Nye & Company website or email to info@nyeandcompany.com.The public is also welcome to preview the collection in person at the Nye & Company galleries located at 20 Beach Street in Bloomfield, New Jersey, Monday through Friday, from 10:00am -4:00pm Eastern time, from now until November 16th. COVID protocols will be strictly enforced.For more information about Nye & Company Auctioneers and the sale of the Charles S. Shultz Collection on Wednesday, November 17th, visit www.nyeandcompany.com.John Nye Nye & Company Auctioneers 20 Beach Street Bloomfield, NJ 07003 USA 973-984-6900 john@nyeandcompany.com https://www.nyeandcompany.comJohn Nye had a long and fruitful career at Sotheby’s before he and his wife, Kathleen, acquired Dawson’s in 2003 and started Dawson & Nye. With the move to Bloomfield seven years later, they renamed the business to Nye & Company (Auctioneers, Appraisers, Antiques). The firm is nationwide, but the vast bulk of the business comes from trusts and estates in the tri-state area. For more information about Nye & Company Auctioneers, visit www.nyeandcompany.com.

05-19-2021 | Arts & Culture
Nye & Company Auctioneers
Nye & Company's Online Estate Treasures Auction, June 2nd and 3rd, Offers A Dive …
Bloomfield, NJ, USA, May 19, 2021 -- Nye & Company Auctioneers’ two-day, online Estate Treasures auction, slated for Wednesday and Thursday, June 2nd and 3rd at 10 am Eastern time both days, is sure to delight collectors, designers, dealers and institutions alike. The catalog includes an exceptionally strong selection of blue-chip artists’ names and a large selection of both traditional and modern furniture, rugs and lighting from private New York,
11-24-2020 | Associations & Organizations
Lawn.com.au
Lawn Service Company Obtains Horticulture Resource Website
Milton, QLD – November 23, 2020 –Lawn.com.au has recently obtained plantbuzz.com. Plant Buzz is now part of the family. With Plant Buzz having similar goals in providing horticulture education; the company decided to keep the site running when Plant Buzz was no longer to continue operating on its own. Plant Buzz was created to provide access to horticultural research, specifical access to Allium Central. The site provided information
02-20-2019 | Science & Education
Gamry Instruments
The Biofilm Engineering Research Group at Washington State University Has Schedu …
In collaboration with Gamry Instruments, the Biofilm Engineering Research Group at Washington State University has scheduled a short course “Electrochemically Active Biofilms” for July 30 – Aug. 2, 2019 The Biofilm Engineering Research Group at Washington State University will be sponsoring an Electrochemically Active Biofilms Short Course in collaboration with Gamry Instruments. The course will be held July 30th – August 2nd, 2019 at the Gene and Linda Voiland School
01-25-2019 | Science & Education
Gamry Instruments
Gamry Instruments to Co-Sponsor the 23rd Annual Penn State University Corrosion …
Registration is open for The Penn State University’s 23rd Annual Corrosion Short Course scheduled for June 2-7, 2019 at the University Park Campus in State College, PA (USA). Gamry Instruments will be a co-sponsor for the course. Philadelphia, PA, January 24, 2019 – Registration is now open for the annual Penn State University Corrosion Short Course being held at the Penn State University Park Campus June 2-7th. The course, now in
10-25-2018 | Media & Telecommunications
Wall Spring Collective
Bank lies to government, defrauds and evicts single mom and disabled daughters.
Clarksville, Tennessee based Legends Bank forged signatures and altered mail to defraud Gallatin resident and keep her in illegal loan according to lawsuit. According to a lawsuit filed June 15, 2018 in Sumner County, Legends Bank spent years charging interest on an illegal loan and has now obtained a court order allowing the bank to evict a single mother and her two disabled daughters from the home secured by the mortgage.
08-22-2018 | Business, Economy, Finances, B …
Accord Market
Global Floor Grinding Machine Market Report Segmentation, Consumption, Present S …
Global Floor Grinding Machine Market 2018 offer insights of a detailed and fundamental research of Floor Grinding Machine industry with the future prospects of the market to provide the current state and emerging trends in the market. Global Floor Grinding Machine Market 2018 research report further highlights the methodical outlook of the industry by considering aspects such as Floor Grinding Machine market growth, consumption volume, market trends and Floor Grinding
Comments about openPR
OpenPR ist the nicest and most clearly laid out PR platform I have seen to this day. The press releases are displayed very nicely and clearly and without any unnecessary frills. The updates are fast and the finished release looks appealing and is clearly legible. Even with 16 years of experience one discovers new things from time to time. Congratulations!
Gabriele Ketterl, Director Marketing & PR, Menads