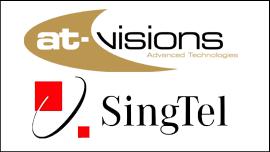 at-visions is happy to announce that it has partnered with SingTel for its ONEvision suite of services. SingTel will be the lead in the markets that both companies have identified, among them Singapore, Thailand, Sri Lanka, Philippines, Malaysia, Vietnam and Indonesia.With the partnership, at-visions and SingTel hope to bring even greater synergy to the markets that they both serve. This would translate into greater value and greater variety and integration of content, especially for hotels in the (Singapore) market.For example at-visions will receive a direct IP stream for all SingTel channels and will not require any headends for SingTel channels which results in savings for its customers.Mr. Oliver Winzer, CEO at-visions Asia comments: "We always have, and always will strongly believe in partnerships which we therefor actively establish along the whole value chain. Working together engaged, cooperative and trustful is one of the most important and rewarding ways to enhance the value we can bring into the market. We are especially looking forward to the benefits of working with such a renowed partner like SingTel!"About Singtel The SingTel Group is Asia's leading communications group with operations and investments in more than 20 countries and territories around the world. Singtel provides a wide spectrum of multimedia and infocomms technology (ICT) solutions, including voice, data and video services over fixed and wireless platforms.at-visions GmbH Gewerbepark 11 7412 Wolfau