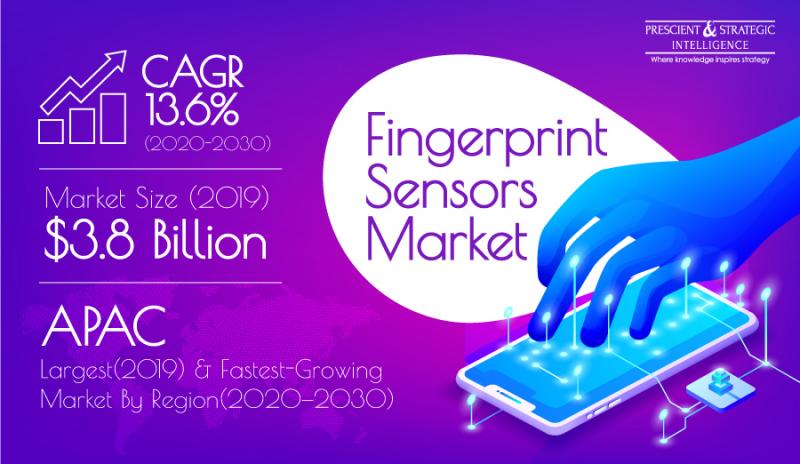 With the consistent increase in smartphone sales around the world, the fingerprint sensors market size, as computed by P&S Intelligence, is expected to increase from $3.8 billion in 2019 at a high 13.6% CAGR between 2020 and 2030 (forecast period). In the beginning, mobile phones were mostly produced in Europe and North America, and they were expensive for the common folk. But, since the entry of Chinese companies in smartphone production, their prices have dropped drastically, and the masses are now able to purchase them.Get the Free Sample Pages: https://www.psmarketresearch.com/market-analysis/fingerprint-sensors-market-outlook/report-sampleSimilarly, these devices are gaining popularity in the government sector, where identity authentication is even more important. An increasing number of government complexes, including income tax offices and military establishments, are using fingerprint sensors are an important access control tool. Since these places have tonnes of sensitive information, who it is exposed to is critical. Similarly, with governments around the world going digital, they are replacing handwritten signatures with electronic fingerprint data for the distribution of public services. For instance, drivers’ licenses often carry a microchip containing biometric information such as the fingerprint and iris scans of users.Compared to consumer electronics, the BFSI sector has an even stronger need for the authentication of users’ identity. Since this sector deals with money, the risk of frauds and cyberattacks is one of the highest here. Moreover, with the increase in the volume of digital transactions via debit and credit cards, which are one of the most-widely cloned objects, the need for better security measures is high. As a result, these cards are being integrated with a microchip containing the user’s fingerprints, while the mobile point-of-sale (mPOS) terminals, or credit/debit card machines, are being equipped with a fingerprint reader.Make Enquiry Before Purchase: https://www.psmarketresearch.com/send-enquiry?enquiry-url=fingerprint-sensors-market-outlookThe growing consumer electronics sales are also the reason the fingerprint sensors market was dominated by Asia-Pacific (APAC) in 2019. China, India, and South Korea are three of the largest buyers of smartphones, laptops, and tablets in the world, on account of their increasing disposable income. Moreover, many of the companies producing such devices are based in these countries. In addition, the digitization initiatives of regional governments will continue to push up the demand for fingerprint sensors, which is why APAC will continue being the largest market for them throughout the forecast period.Thus, with the strengthening need to secure sensitive information and authenticate the identity of users, fingerprint sensors will continue to be important.About Us: P&S Intelligence is a provider of market research and consulting services catering to the market information needs of burgeoning industries across the world. Providing the plinth of market intelligence, P&S as an enterprising research and consulting company, believes in providing thorough landscape analyses on the ever-changing market scenario, to empower companies to make informed decisions and base their business strategies with astuteness.Contact Us: P&S Intelligence International: +1-347-960-6455 Email: enquiry@psmarketresearch.com Web: https://www.psmarketresearch.com

12-09-2021 | Business, Economy, Finances, B …
P&S Intelligence
Global Hydraulic Equipment Market By Equipment, Type, End User and Growth Foreca …
Developing countries, especially in the Asia-Pacific (APAC) region, are observing a significant surge in the number of manufacturing plants, owing to the easy availability of low-cost raw materials and labor, and flexible environment protection laws in these nations. The increasing number of factories in such nations is expected to steer the hydraulic equipment market growth during the forecast period (2021–2030). According to P&S Intelligence, the market generated $37 billion revenue
12-09-2021 | Advertising, Media Consulting, …
P&S Intelligence
Why Does Asia-Pacific (APAC) Need Smart Parking Systems Urgently?
With the surge in vehicle ownership rates and road congestion levels, public concerns regarding the lack of proper parking spaces are growing rapidly in several countries around the world. Moreover, the lack of adequate parking spaces is quickly becoming a major problem around the world, especially with the rise in unorganized and inadequate car parking in various countries. As per industry experts, around 30.0% of traffic congestion is caused because
12-09-2021 | Advertising, Media Consulting, …
P&S Intelligence
Surging Demand for First and Last-Mile Connectivity Fueling Popularity of Kick S …
The increasing population in many cities around the world is causing a sharp surge in the number of daily commuters, which, in turn, is leading to road congestion, especially during peak hours of the day. One of the most effective solutions to the problem is to increase the adoption of various ride-sharing services such as scooter sharing services. As a result, the governments of several countries are rapidly implementing regulations
12-09-2021 | Business, Economy, Finances, B …
P&S Intelligence
Antimicrobial Coatings Market Segments Analysis, Future Opportunity, Current Cha …
According to the European Centre for Disease Prevention and Control (ECDC), 8.3% of patients admitted to intensive-care units (ICUs) for more than two days were affected by at least one ICU-acquired healthcare-associated infection (HAI) in European countries in 2017. These patients were affected by HAIs such as urinary tract infection (UTI), pneumonia, and bloodstream infection. Similarly, the Centers for Disease Control and Prevention (CDC) estimates that on any given day,

12-09-2020 | Fashion, Lifestyle, Trends
Market Research Future
APAC to Spearhead Shampoo Market
The global shampoo market is likely to grow at a notable CAGR between 2019- 2024, reveals the new Market Research Future (MRFR) report. Shampoo, simply put, is a hair care product that is a viscous liquid used to clean hair. It helps to remove the unwanted build-up, thus making hair clean and manageable. Medicated shampoo, children’s shampoo, cosmetic shampoo, dry shampoo, and others are the different types of shampoo. Get
03-06-2019 | IT, New Media & Software
ReportsWeb
Telcos' MSS Market Opportunity in APAC
Telcos' MSS Market Opportunity in APAC Summary "Telcos' MSS Market Opportunity in APAC", a new Telecom Insider Report by Publisher, provides an executive-level overview of the managed security services (MSS) market opportunity for telecoms companies in Asia Pacific (APAC). It delivers qualitative insights into the MSS market, analyzing key trends and growth drivers in the region. Get Sample Copy at https://www.reportsweb.com/inquiry&RW00012430719/sample APAC telcos are in varying states of development with their MSS services.
06-12-2017 | Industry, Real Estate & Constr …
ReportsWorldwide
Agrochemicals Market in APAC
ReportsWorldwide has announced the addition of a new report title APAC: Agrochemicals: Market Intelligence (2016-2021) to its growing collection of premium market research reports. The report “APAC: Agrochemicals: Market Intelligence (2016-2021)” provides market intelligence on the different market segments, based on type, active ingredient, formulation, crop, and pest. Market size and forecast (2016-2021) has been provided in terms of both, value (000 USD) and volume (000 KG) in the report. A
04-05-2017 | Health & Medicine
ReportsWorldwide
Spinal Fusion - APAC Analysis and Market Forecasts
ReportsWorldwide has announced the addition of a new report title Spinal Fusion - APAC Analysis and Market Forecasts to its growing collection of premium market research reports. The spinal fusion market is an established orthopedic market that has witnessed sluggish revenue growth in the past five years. GlobalData evaluated the currently-marketed spinal fusion implants, identified the unmet needs in the market, and provided an understanding of surgeons’ perceptions of the latest
11-10-2016 | Science & Education
Persistence Market Research Pvt. Ltd
Global Dimer Acid Market : APAC Demanding Region
The global market for dimer acids valued at an estimated US$ 494.1 million in 2015, and is expected to expand at a CAGR of 6.1% from 2015 to 2021, to reach a market value of US$ 705.8 Mn by 2021. The growth of end use industries is expected to emerge as a major factor driving the global dimer acid market during the forecast period. Moreover, steady economic growth in regions
01-12-2012 | IT, New Media & Software
LeadMaster Australia Pty Ltd
LeadMaster APAC appoints new Chief Financial Officer
LeadMaster, a leading CRM and Inside Sales Services company focused on the Asia-Pacific region, announced today that Sócrates Jiménez has joined the company as Chief Financial Officer. Mr. Jiménez will be based at the company’s corporate headquarters in Sydney, Australia. “LeadMaster is very fortunate to add Sócrates to its growing team as the Company strengthens and aggressively expands its business presence in the Asia Pacific region. As part of
Comments about openPR
OpenPR ist the nicest and most clearly laid out PR platform I have seen to this day. The press releases are displayed very nicely and clearly and without any unnecessary frills. The updates are fast and the finished release looks appealing and is clearly legible. Even with 16 years of experience one discovers new things from time to time. Congratulations!
Gabriele Ketterl, Director Marketing & PR, Menads