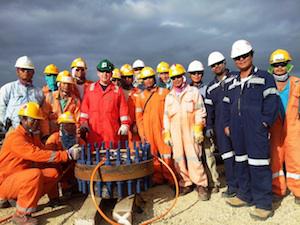 With its bolt tensioning tools and torque wrenches used in global oil and gas projects, Tentec’s engineers are used to travelling around the world to give their expert advice on the correct tools for the job or to deliver standard or customised training solutions. In March 2012, Tentec was asked to quote for the supply of its bolt tensioners and torque wrenches for the ambitious PNG LNG Project. The Papua New Guinea liquefied natural gas (PNG LNG) project is an integrated development that includes gas production and processing facilities in the Southern Highlands and Western Provinces of Papua New Guinea, including liquefaction and storage facilities. There are over 700 kilometres (450 miles) of pipelines connecting the facilities. Through its Korean distributor, Tentec was asked to quote to supply a range of its bolt tensioning tools and torque wrenches to the Daewoo E&C, the sub-contractor responsible for the construction of the process facilities. After several months of negotiations, the order was won against stiff competition, particularly from cheaper suppliers. However, the contractors on site were conscious of the need for quality equipment and knew that Tentec was a recognised brand and its equipment was trusted by most of the major organisations within the industry. They also had a requirement for comprehensive demonstrations and training both Daewoo and the main contractor, CJJV, personnel in the correct and safe use of the hydraulic tensioning and torque tools.So in late summer 2012, Tentec’s senior sales engineer Stuart Drury travelled to the wilds of Papua New Guinea to run a comprehensive training programme. For 15 days, Stuart worked with between 25-30 operatives from Daewoo and CJJV to show them, in theory and practice, the standard procedures involved in torque tightening and tensioning. This training in the correct use of Tentec’s equipment will ensure the integrity of the pipelines being installed as part of this major project for the LNG plant that is projected to produce 6.6 million tons of LNG a year.Tentec, designers, manufacturers and suppliers of bolt tightening equipment sell their equipment worldwide and recently to the PNG LNG Project in Papua New Guinea.Tentec design, manufacture and market innovative bolt tightening equipment. As an innovative producer of bolt tightening equipment all tools are produced with a high level of focus on quality and safety.The company has Lloyds quality approvals to ISO 9001. ISO 14001 & BS OHSHS 18001. The bolt tensioning products are designed to suit diverse applications in varied working environments throughout the industrialized world and many unique features are incorporated into the products to ensure that they are simple, reliable and safe.Paul Egginton. Tentec Ltd. Plymouth House. Guns Lane, West Bromwich, West Midlands B70 9HS. Tel: + 44 (0) 121 524 1990 Fax: + 44 (0) 121 524 1999 E-mail: sales@tentec.net Web: http://www.tentec.net Twitter: http://twitter.com/tentec_offshore UK Press Contact: Eileen Holmes-Ievers. In Press Public Relations Ltd. St John's Chapel, High Street, Lambourn, Berkshire. RG17 8XL. Tel. +44 (0)1488 674200 E-mail: eileen@inpress.co.uk http://www.inpress.co.uk Twitter: http://twitter.com/InPressPR

02-27-2015 | Energy & Environment
Tentec Ltd
Tentec Launch Innovative New Range of Spring Return Topside Bolt Tensioning Tool …
Tentec, a world-leading designer, manufacturer and supplier of bolt tightening equipment for the oil and gas industry will be launching its brand new range of topside bolt tensioning tools at AOG 2015 in Perth, Australia 11-20th March. Visitors will be able to view Tentec’s Force10 tools on the stand of its Australian distributor National Tools Booth M1. The Force10 range of topside bolt tensioning tools from Tentec consist of 10
10-07-2014 | Energy & Environment
Tentec Ltd
Tentec Fulfils Major Bolt Tensioning Order for Wind Turbines in China
Working together with its distributor in China, HTS, Tentec has sealed a major order for its bolt tensioning equipment from a leading international wind turbine manufacturer. The order involves the supply of 50 specially designed WTB blade bolt tensioners for the new G114 wind turbines. Tentec’s standard Aero WTB series is a purpose designed range of hydraulic bolt tensioning tools to suit most wind turbine bolting applications. All WTB tensioning tools
05-15-2014 | Energy & Environment
Tentec Ltd
Tentec Exhibit Bolt Tensioners at Global Offshore Wind and Windforce 2014
West Bromwich, West Midlands, May 14, 2014: Hydraulic bolt tensioning specialists, Tentec Ltd will be exhibiting its Aero range of bolt tensioning equipment for wind turbines on Stand 205 at Global Offshore Wind 2014 in Glasgow and at Windforce 2014 in Bremen, Germany on Stand F12. On display will be Tentec’s Aero WTB and WTF ranges of bolt tensioners along with the WTP3 pump. A decision to attend both
03-13-2014 | Energy & Environment
Tentec Ltd
Tentec Now Offers Worldwide Rental on all Topside and Subsea Bolt Tensioners
West Bromwich, UK, 12 March 2014: Tentec, one of the world’s leading designers, manufacturers and suppliers of bolt tightening equipment is pleased to announce that due to popular demand, its renowned ranges of topside and subsea bolt tensioning equipment is now available for worldwide rental. Supported by Tentec’s established worldwide distributor network, this latest move enables organisations to hire and use tools just when they need them, so keeping project