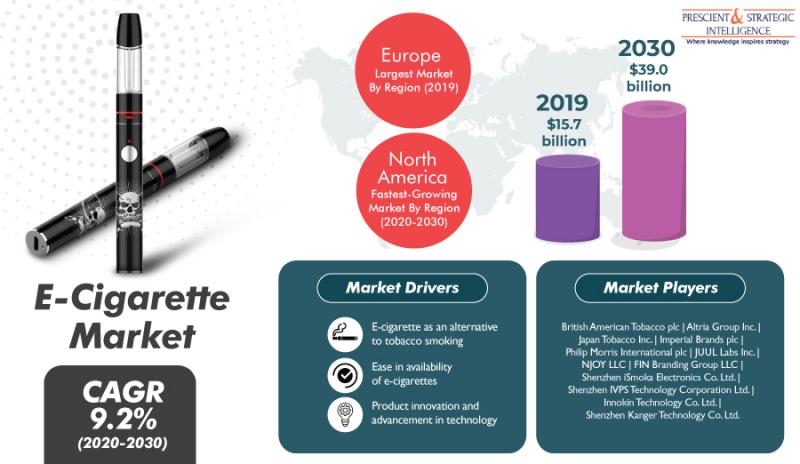 The increasing incidence of deaths caused due to cigarette smoking, is one of the key factors driving the demand for e-cigarettes. According to the World Health Organization (WHO), over 8 million people deaths are recorded every year because of tobacco consumption. Out of these, direct tobacco use claims the lives of over 7 million people across the world. Furthermore, the organization found that cigarette smoking is the most common form of tobacco use globally. Due to this factor, cigarette smokers are increasingly preferring safer alternatives like e-cigarettes.Get the Free Sample Pages: https://www.psmarketresearch.com/market-analysis/e-cigarette-market/report-sampleApart from the increasing availability of e-cigarettes in grocery stores and special outlets, the growing public awareness about the harmful consequences of tobacco smoking on both human and environmental health is also fueling the expansion of the e-cigarette market. Moreover, many governments are taking initiatives such as announcing bans on smoking at certain places in order to create a greener environment. Such initiatives are massively boosting the demand for e-cigarettes, as these products do not generate harmful tobacco smoke and can provide a sensation similar to the one provided by conventional tobacco-based cigarettes.Hence, it can be safely said that the increasing social acceptance of e-cigarettes is propelling the expansion of the global e-cigarette market. As a result, the market revenue is predicted to grow from $15.7 billion in 2019 to $39.0 billion by 2030. The market is also expected to advance at a CAGR of 9.2% from 2020 to 2030. Vaporizers, vape mod, cig-a-like, and T-vapors are the most commonly used types of e-cigarettes. Out of these, the demand for T-vapors is predicted to rise at the highest rate in the upcoming years.Make Enquiry Before Purchase at: https://www.psmarketresearch.com/send-enquiry?enquiry-url=e-cigarette-marketThis is because of the growing consumer preference for these products, especially in South Korea and Japan, on account of their ability to provide a smoking experience similar to that provided by conventional cigarettes. Geographically, the e-cigarette market will surge sharply in North America in the forthcoming years, as per the estimates of P&S Intelligence, a market research company based in India. This is credited to the increasing number of e-cigarette users in the region.Thus, it can be said without hesitation that the demand for e-cigarettes will boom in the forthcoming years, primarily because of their rising social acceptance and increasing availability in retail outlets and grocery stores and the growing incidence of deaths caused due to tobacco-based cigarette smoking all over the world.About P&S Intelligence P&S Intelligence is a provider of market research and consulting services catering to the market information needs of burgeoning industries across the world. Providing the plinth of market intelligence, P&S as an enterprising research and consulting company, believes in providing thorough landscape analyses on the ever-changing market scenario, to empower companies to make informed decisions and base their business strategies with astuteness.Contact: P&S Intelligence International: +1-347-960-6455 Email: enquiry@psmarketresearch.com Web: https://www.psmarketresearch.com

12-03-2021 | Energy & Environment
P&S Intelligence
Solar Panel Recycling Market Trends, Advancement, Growth and Business Opportunit …
The global solar panel recycling market revenue stood at $80.7 million in 2017 and it is predicted to surge to $269.8 million by 2023. According to the estimates of the market research company, P&S Intelligence, the market will advance at a CAGR of 22.0% from 2018 to 2023. The major factors driving the advancement of the market are the growing use of solar energy as an energy source and the
12-03-2021 | Advertising, Media Consulting, …
P&S Intelligence
How is Digital Out of Home Revolutionizing Advertising?
Rapid growth in advertising spending all over the world, increasing disposable income of the people residing in the Asia-Pacific (APAC) region, and the surging economy of several countries are the other factors propelling the demand for digital out of home advertising. Additionally, people are nowadays more attracted toward online channels, as these are highly accessible, engaging, and provide real-time information. Digital billboards are increasingly being used for advertisement, because of
12-03-2021 | Logistics & Transport
P&S Intelligence
Logistics Companies Deploying IoT Solutions to Enhance Efficiency
The flourishing e-commerce sector, owing to the changing buying behavior of customers, is resulting in the incorporation of internet of things (IoT) solutions in logistics activities. E-commerce companies are increasingly opting for such solutions to manage inconsistent shipping, sudden surge in orders, and meeting the time-sensitive needs of customers. The increasing popularity of e-commerce services is resulting in the burgeoning demand for fast and free shipping, without increasing the prices
12-03-2021 | Advertising, Media Consulting, …
P&S Intelligence
Urban Air Mobility Market is Poised to Drive Accelerated Expansion in Coming Yea …
Urban areas are constantly facing the challenge of road congestion due to the increasing number of vehicles on roads. Traffic jams often lead to the wastage of time and impact economic growth. For example, people in the U.S., on an average, spend around 90 hours in traffic jams each year, which increases their transportation spending substantially. Moreover, the incidence of road accidents has rapidly escalated in the developing countries of

06-04-2019 | Health & Medicine
Pabst Science Publishers
Health literacy: How to improve health behaviors
Health literacy is defined as "people´s knowledge, motivation and competences to access, understand, appraise and apply information to make judgements and take decisions in everyday life healthcare concerning disease prevention and health promotion to maintain and improve quality of life during the life course." In a new volume Anne-Kathrin Mayer and colleagues shed light on the concept of health literacy from different disciplines: psychology, educational sciences, health sciences and
06-03-2019 | Health & Medicine
World Congress on Mental Health
Mental Health 2019
PULSUS brings in a new spin on conferences by presenting the latest scientific improvements in your field. Listen to motivating keynotes from thought leaders or rub elbows with pioneers across the globe. London is all set for an amazing event as PULSUS proudly presents the “World Congress on Mental Health” scheduled on November 13,14, 2019 at London, UK. PULSUS cordially welcome researchers, academicians, students and business professionals in the field
02-04-2019 | Business, Economy, Finances, B …
GetSavvi Health
GetSavvi Health - For Health Insurance Needs
GetSavvi Health offers health insurance, which includes basic and primary care at affordable prices. The company believes in the fact that South Africans are hard working and each of them deserve access to affordable and high-quality healthcare facilities and that too at affordable prices. The company desires to be a leader in the primary healthcare sector. Primary care is all about basic healthcare facilities through day-to-day benefits, which help in
11-26-2018 | Science & Education
ReportsWeb
Digital Therapeutics Market Outlook 2025 : Proteus Digital Health, Omada Health, …
ReportsWeb.com has announced the addition of the “Global Digital Therapeutics Market Size, Status and Forecast 2025” The report focuses on major leading players with information such as company profiles, product picture and specification. This report studies the global Digital Therapeutics market, analyzes and researches the Digital Therapeutics development status and forecast in United States, EU, Japan, China, India and Southeast Asia. This report focuses on the top players in global market,
11-05-2018 | Health & Medicine
LexisConferences
MENTAL HEALTH NURSING, PUBLIC HEALTH AND HEALTH CARE SUMMIT
Psychiatric and Mental Health Nursing 2019 will prove to be a noteworthy event, with this we cherish mental health nursing by embracing the theme, “Fore-fronting nursing care to achieve mental wellness” , and would step forward to provide an opportunity to step in and join our family, as we bring and encourage to join professionals from the following areas of Mental Health, Psychology, Nursing, Physiology, Neurology, Healthcare, Education, Business to
07-24-2017 | Health & Medicine
MarketResearchReports.biz
TrendSights Analysis: Guided Health
"TrendSights Analysis: Guided Health", explores what the Guided Health trend is, why it is important, who is most influenced by it, and how brands and manufacturers can capitalize on it. The research concludes by identifying where the trend is heading next and how long it will last. In the information economy, health-conscious consumers now more confidently embrace an abundance of new information tools, enabling more health-driven choices. Consumers are seeking conveniences
Comments about openPR
OpenPR is clearly structured and remains true to its principle of confining itself to the essential parts. OpenPR has proven to be a very good and reliable partner to our media agency: Within the shortest time the releases are online and go down well with the media representatives. The success of OpenPR is reflected in the steadily increasing number of press releases. It is good that OpenPR exists!
Ursula Koslik, Director Marketing & PR, F+W Hamburg