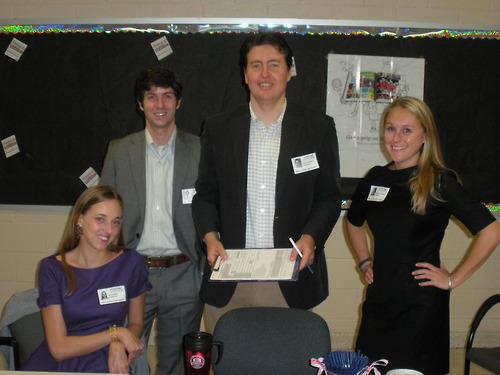 Evan Guthrie of the Evan Guthrie Law Firm in Charleston, South Carolina helped with a voter registration drive as part of the American Bar Association Young Lawyers Division Fall Meeting at West Ashley High School in Charleston, SC on Thursday September 27th 2012. The event was the service project for the quarterly ABA YLD meeting that was held in Charleston in October of 2012. There were several young lawyers from the Charleston, SC area that participated in the event. The American Voter is a non-partisan public service project of the American Bar Association - Young Lawyers Division designed to teach and involve young people about the generations who struggled to guarantee the right to vote and to inspire all Americans to participate in the voting process. The event was held at West Ashley High School to encourage students that would be 18 years old at the time of the November 2012. The rule is that even though a student may be 17 at the time they register to vote, they can still vote in the upcoming election if they are 18 at the time of the election. There were a good number of students that had not registered to vote that were able to be signed up. the signup process was simple and convenient for all of the students as all that was needed to register was for the students to fill out a one page form. The event was held in advance of the ABA event to get students signed up so they would be eligible for the November 2012 election. The deadline to vote for the upcoming election would have been before the YLD fall meeting so it was necessary to have the registration event before the meeting. There was a table set up for students to register that was located between the main school building and the cafeteria. There was an announcement made on the school intercom system announcing what the program was and where the sign up table was located. Students then stopped by the table on their way to lunch and were able to sign up in about two minutes. Attorney Evan Guthrie was happy to be involved in such an important program that could change the lives of so many young people by getting them involved in the political process. Mr. Guthrie is a member of the American Bar Association and its Young Lawyers and was more than willing to volunteer for a service project for the ABA event that was held in the city he lives and works in. Attorney Guthrie looks forward to being involved in future ABA events throughout the country.Evan Guthrie Law Firm is licensed to practice law throughout the state of South Carolina. The Evan Guthrie Law Firm practices in the areas of estate planning probate wills living trust special needs trusts personal injury accident and divorce and family law and entertainment law. For further information visit his website at http://www.ekglaw.com . Follow on Twitter https://twitter.com/ekglaw Like on Facebook http://www.facebook.com/ekglaw . Avvo http://www.avvo.com/attorneys/29401-sc-evan-guthrie-3562169.html LinkedIn http://www.linkedin.com/company/2526866 Google + https://plus.google.com/107380867225921981464/about Evan Guthrie Law Firm 164 Market Street Suite 362 Charleston SC 29401 843-926-3813Evan Guthrie Law Firm 164 Market Street Suite 362 Charleston SC 29401 843-926-3813