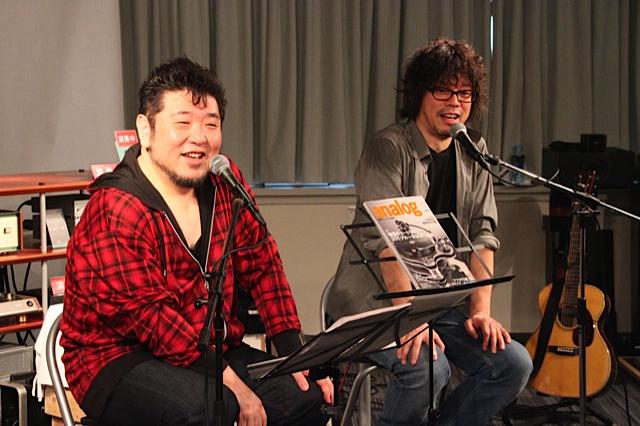 Renown Japanese Manga Artist, Naoki Urasawa and a host of Analogue audio products including the twice Japanese Audio Excellence Award winner the British made Sonneteer Sedley phono pre-amplifier attended an evening of song and conversation hosted by the music producer Kouji Wakui. Better known for his Manga works of Yawara, Monster, Master Keaton and 20th Century Boys amongst others Urasawa is also affectionately known amongst our Japanese friends as an LP maniac. An early October weekend gathering of analogue enthusiasts, a guitar or two and an icon made for a perfect outing for music lovers and vinyl aficionados. The event was called ‘Analog school’. They did indeed use the american spelling to match the magazine cover shown in the picture . With Naoki Urasawa as the guest star (alongside the Sonneteer Sedley of course) Kouji Wakui hosted an evening talking about LPs and the sound quality of pressings down the ages with live music interludes by the Band Hilly Han Han.The Sonneteer Sedley phono stage pre-amplifier which sits between your record player and your hifi system, winner of the top audio award from Japan in both 2006 and 2008 has become an icon of analogue audio reproduction globally and has been clearly taken to the hearts of the music lovers of Japan.Established in 1994, Sonneteer are the multi award winning designers and manufacturers of luxury home music hifi systems. All products are designed and made in Surrey,United Kingdom.www.sonneteer.co.uk Designed for audiophiles. Made for everyone.Sonneteer PO Box 163c Esher Surrey KT10 0YH

You can edit or delete your press release British icon, Sonneteer goes Manga with Naoki Urasawa’s LP mania at the ‘Analog School’ here

News-ID: 241453 • Views: 1672
Comments about openPR
OpenPR ist the nicest and most clearly laid out PR platform I have seen to this day. The press releases are displayed very nicely and clearly and without any unnecessary frills. The updates are fast and the finished release looks appealing and is clearly legible. Even with 16 years of experience one discovers new things from time to time. Congratulations!
Gabriele Ketterl, Director Marketing & PR, Menads