Press release from: The FH Foundation 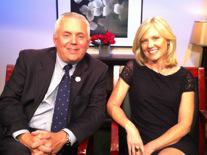 The radio and television broadcasts reached over 3 million people.

SOUTH PASADENA, CA -- Affecting as many as 1 in 500 people, familial hypercholesterolemia (FH) is an extremely common but tremendously undiagnosed genetic condition. It's because of the lack of awareness of this deadly but treatable disorder that Katherine Wilemon started The FH Foundation and, this year, spearheaded the first annual FH Awareness Day. On September 20, 2012, Wilemon along with Dr. James A. Underberg M.D., an internationally recognized lipid specialist from New York University (NYU), participated in a satellite media tour in New York to raise awareness of FH. The media blitz included eleven broadcast television segments, fourteen broadcast radio segments and is estimated to have reached over 3 million people. In their ongoing support of the FH Foundation, Genzyme Corporation funded the media tour and 30 days of FH educational messages. "FH is very common among the general public, but it's not well-diagnosed. Of the 620,000 people in the U.S. with the disorder 80% don't know they have it, which is a terrible situation because it can be deadly. Through The FH Foundation we are trying to raise awareness of the disorder and encourage screening. FH is treatable, but that doesn’t do you any good if you don't know you have it," explained Katherine Wilemon, President, The FH Foundation (http://www.thefhfoundation.org).FH is associated with extremely high cholesterol levels from birth and a family history of early heart disease. It is a genetic condition that impairs the body's ability to remove cholesterol from the bloodstream. Without proper screening and treatment, patients can suffer early heart attacks and strokes but FH cholesterol can only be effectively managed with medication. The Foundation urges early screening for anyone with unusually high cholesterol counts and particularly if there is a history of early heart disease in the patient's family. Children of parents with FH should be screened as well, since they have a 50% chance of inheriting the disorder."FH begins at a very young age, as early as 2, which is why childhood screening is so often encouraged in families with a parent who has FH. I was recently able to attend a meeting with the CDC Office of Public Health Genomics and I'm happy to say the CDC has recently taken steps to introduce Tier 1 interventions, such as genetic testing and family health histories, to help reduce the death rates associated with FH. Between support like this from the medical and research communities and with help from the media in spreading the word, The FH Foundation is much better able to fulfill its mission of raising awareness of FH and, consequently, saving lives," explained Wilemon.About The FH Foundation: The mission of the FH Foundation is to raise awareness of FH (familial hypercholesterolemia) through education, advocacy, and research. Our goal is to save lives by increasing the rate of early diagnosis and encouraging proactive treatment. If left untreated this life-threatening genetic disorder leads to aggressive cardiovascular disease in men, women, and children.Media Contact: Katherine Wilemon Board President kw@thefhfoundation.org 626-465-1234 http://www.thefhfoundation.org

You can edit or delete your press release First FH Awareness Day Raises Profile of FH, A Genetic Disorder Affecting 1 in 500 here

More Releases from The FH Foundation