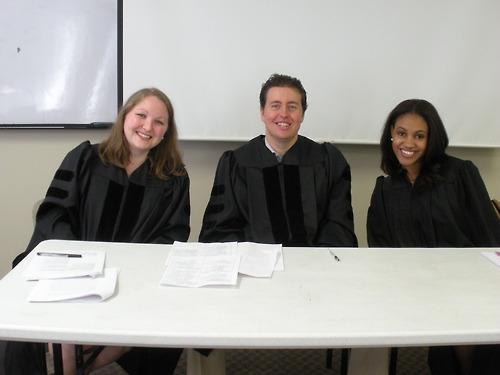 Evan Guthrie of the Evan Guthrie Law Firm in Charleston, South Carolina took part in the CSOL 2L Moot Court Competition in Charleston, SC on Saturday September 15th 2012. The contest was an internal competition among second year law students at the law school in Charleston. The case that the students were arguing in the event was about an internet defamation case that had negative implications for one business and questioned the role of law in the social media world. In the case, the business sought damages for lost business and reputation as a result of comments about their restaurant on a web site that rates and scores different eating places. The comments were user generated, but there was a question of whether the web site was responsible for the comments of the users of their site and if they site sought to elicit defamatory statements with the rating system offered to users. Another issue in the case was whether there was enough contacts for a restaurant in a different state to bring a suit against a web site. The law students had to each argue a side in the case for a set length of time to a panel of three judges with no witnesses and seek to appeal or affirm a lower court judgment. Judges in the competition could interrupt the arguments and ask their own questions to students about the case. The competitors were each scored by three judges in categories that ranged from knowledge of the facts of the case, speaking ability, and ability to answer questions from the judges. The scores are then added and students with the highest scores move on to further rounds until a winner is declared. After each argument the student lawyers are invited back in to the court room and receive comments and criticism from the judges on areas that they did well in and areas where they could stand to improve on. The internal contest is also a way that the school’s moot court team picks members based on performance in the event. Attorney Evan Guthrie was a judge in The Charleston law school’s internal competition for the first time after being a judge in the national competition featuring law schools and students from across the country earlier in the year. Mr. Guthrie enjoyed his chance to be a judge for the event and the ability to be on a panel and participate. Attorney Guthrie took part in two different arguments that lasted about a half hour in duration each. Mr. Guthrie looked forward to being able to participate in future moot court events in which he is promoted to the role of judge if only for a day and then go back to being a lawyer.Evan Guthrie Law Firm is licensed to practice law throughout the state of South Carolina. The Evan Guthrie Law Firm practices in the areas of estate planning probate wills living trust special needs trusts personal injury accident and divorce and family law and entertainment law. For further information visit his website at http://www.ekglaw.com . Follow on Twitter https://twitter.com/ekglaw Like on Facebook http://www.facebook.com/ekglaw . Avvo http://www.avvo.com/attorneys/29401-sc-evan-guthrie-3562169.html LinkedIn http://www.linkedin.com/company/2526866 Google + https://plus.google.com/107380867225921981464/about Evan Guthrie Law Firm 164 Market Street Suite 362 Charleston SC 29401 843-926-3813Evan Guthrie Law Firm 164 Market Street Suite 362 Charleston SC 29401 843-926-3813