Men NOT Allowed to Say NO on Sadie Hawkins Day 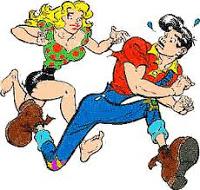 Sadie Hawkins Day allows single women to ask for what they want... and get it!San Rafael, CA, October 18, 2012 -- (For Immediate Release) Contact: Tom Andrews, 415/507-9962Once a year single women can ask for whatever they want...and get it. At this year's annual Sadie Hawkins Day Dance, Friday, November 9, 2012, 8pm-Midnight, men are not allowed to say no if a woman asks them to dance. The party is at Handle's at The Pleasanton Hotel, 855 Main Street, Pleasanton CA 94566.. Contrary to popular belief, Sadie Hawkins Day does NOT occur on Leap Day. It happens every November 15."Single women have lots of complaints about single men," says Rich Gosse, Chairman of The Society of Single Professionals, the world's largest non-profit singles organization. "One of the biggest is men who turn them down when asked to dance. How rude! At our Sadie Hawkins Day Dance, men will NOT have that option. Sadie Hawkins Day is a wonderful opportunity for single women to be assertive and get what they want in life, rather than follow the disastrous strategy of playing hard to get."Rich Gosse, author of eight books on dating, is available to the news media to discuss Sadie Hawkins Day in the context of bachelorettes fulfilling their romantic needs, by calling 415/479-3800.Sadie Hawkins Day, an American folk event, made its debut in Al Capp's Li'l Abner strip on November 15, 1937. Sadie Hawkins was "the homeliest gal in the hills" who grew tired of waiting for the fellows to come a courtin'. Her father, Hekzebiah Hawkins, a prominent resident of Dogpatch, was even more worried about Sadie living at home for the rest of his life, so he decreed the first annual Sadie Hawkins Day, a foot race in which the unmarried gals pursued the town's bachelors, with matrimony the consequence. By the late 1930s the event had swept the nation and had a life of its own. Life magazine reported over 200 colleges holding Sadie Hawkins Day events in 1939, only two years after its inception. It became a woman-empowering rite at high schools and college campuses, long before the modern feminist movement gained prominence.Adults of all ages are welcome. $20 at the door includes dancing to current hits and oldies. Coat & tie/dressy attire is recommended. Anyone who wishes more information about this and many more singles parties may visit http://www.ThePartyHotline.com or call 415/507-9962.About The Society of Single Professionals: Society of Single Professionals is the events division of American Singles Education, Inc., world's largest non-profit singles organization. We are the only organization that runs events for singles worldwide, on 6 continents. Our Singles Travel Company division organizes dozens of affordable group tours for singles each year, to exotic destinations worldwide. We also operate The Singles Podcasting Network, featuring interviews with major authors and experts on dating and the single lifestyle.Media Contact: Rich Gosse Society of Single Professionals 205 Mark Twain Avenue, San Rafael CA 94903 415-507-9962 richgosse@richgosse.com http://www.ThePartyHotline.com

05-27-2021 | Fashion, Lifestyle, Trends
Millboard
Millboard proud to contribute to Gloucester hospital’s COVID Memorial Garden
A new memorial garden at Gloucestershire Royal Hospital, created to remember the lives lost to COVID-19, includes integral seating formed of Millboard’s Enhanced Grain boards in ‘Smoked Oak’, which the company donated to the project. The garden, which as well as a sunken seating area includes a pergola and raised beds, is evocative of a woodland glade and was installed by Bristol firm New Homes Landscape to a design by Danny
03-28-2021 | Arts & Culture
BookBuzz.net
Author Heatherly Bell Releases New Small Town Romance - Lucky Cowboy
Author Heatherly Bell Releases New Small Town Romance - Lucky Cowboy Author Heatherly Bell is pleased to announce the upcoming release of her new small town romance, Lucky Cowboy. Scheduled for release on April 6, 2021, the book is already receiving rave reviews from readers and reviewers. Sadie Stephens has loved Lincoln Carver since she was a girl, but a family feud involving a runaway bride closed any options for a
03-26-2020 | Leisure, Entertainment, Miscel …
Industry Global Insight
Multitrack Recording Market Business Opportunities 2026 - Top Companies are SADi …
IndustryGrowthInsights offers a latest published report on Global Multitrack Recording Market industry analysis and forecast 2019-2025 delivering key insights and providing a competitive advantage to clients through a detailed report. The report contains XX pages which highly exhibits on current market analysis scenario, upcoming as well as future opportunities, revenue growth, pricing and profitability. Multitrack Recording Market research report delivers a close watch on leading competitors with strategic analysis, micro and
07-22-2016 | Arts & Culture
Sister Sadie Moves To #4 On Billboard Bluegrass Album Chart
Sister Sadie Moves To #4 On Billboard Bluegrass Album Chart
Sister Sadie's self-titled, debut album on Pinecastle Records moved to Number Four on the "Billboard" Bluegrass Album chart after entering at Number Nine for the last chart time period. "I think I can speak on behalf of the girls in Sister Sadie when I say we are all thrilled, grateful and humbled of hearing the news that we have moved into the number four position in the illboard' chart," says group
03-17-2016 | Arts & Culture
Author Sadie Grubor
Your Next Hot Rock Star Romance has Arrived
The next installment of The Falling Stars Series has arrived. In previous books, author Sadie Grubor has focused on the male characters and the struggles of tragic childhoods and the strife of being a celebrity. Having met Sidra Campbell and Xavier Stone in the previous book – Hidden in the Stars (HITS). Readers will now get the full behind the sarcasm, wit, and foul mouthed female character in the latest release –
01-24-2013 | Arts & Culture
WWA gallery
"I Believe in Unicorns, Too!" gallops into town Saturday, February 16th
WWA Gallery Presents: I Believe in Unicorns, Too! Opening Reception: Saturday, February 16th| 7-10PM On View: February 16th – March 23rd, 2013 Regular Gallery Hours: Tuesday to Saturday 11-5pm It’s time to believe…again! WWA Gallery’s much loved anti-doom and gloom exhibit “I Believe in Unicorns” gallops back into town on rainbow hooves Saturday, February 16th with “I Believe in Unicorns, Too!” Bursting with all the saccharine sweet and fantastical happiness that over 50 fine artists, illustrators,
Comments about openPR
OpenPR is clearly structured and remains true to its principle of confining itself to the essential parts. OpenPR has proven to be a very good and reliable partner to our media agency: Within the shortest time the releases are online and go down well with the media representatives. The success of OpenPR is reflected in the steadily increasing number of press releases. It is good that OpenPR exists!
Ursula Koslik, Director Marketing & PR, F+W Hamburg